The US continues to dominate sales tech deal share, with 1155 deals between 2012 and 2016, or 65% of total deals globally. However, combined deals to sales tech startups outside the US have been on the rise annually. Starting at 25% of deals in 2012, the proportion of deals to non-US sales tech companies has been growing each year since, reaching a high of 45% of deals in 2016.

Using the CB Insights database, we analyzed deals between 2012 and 2016 to sales tech startups outside the US and mapped top international VC-backed companies that have received funding in the previous 18 months.

Countries with highest sales tech deal activity outside the US

In our map below, we highlight up to three of the most well-funded international private sales tech startups per country that have received funding in the last 18 months.

Outside of the US, Canada, India, and the UK boasted the largest number of sales tech startups funded between 2012 and 2016, together representing 14% of all non-US startups. Some notable sales tech deals in these top countries include an $8M Series B in Q4’16 to Artesian, a UK-based customer intelligence platform; a $17M growth equity investment in Q2’16 to Prinova, a Canadian-based customer communication management software; and a $3M seed investment in Q4’16 to Active.ai, an India-based artificial intelligence enabled customer engagement platform.

Although there are a wide variety of countries with some sales tech deal activity, Europe boasted a particularly high level with 14 countries with at least one deal to a VC-backed sales tech startup in the last 18 months. Noteworthy companies in the region include Sweden-based Universal Avenue, a platform that allows companies to access sales professionals around the world, with total funding worth $17M, and Belgium-based Teamleader, an all-in-one CRM, sales, invoicing, and project management platform, with total funding of $13.8M.

China is home to the most well-funded sales tech company outside the US; FXiaoKe, a provider of mobile-based tools for sales teams, has amassed $233M in total funding.

Note: Company lists for each country are not exhaustive. A list of the companies featured below is at the end of this brief. Click on the image below to enlarge. 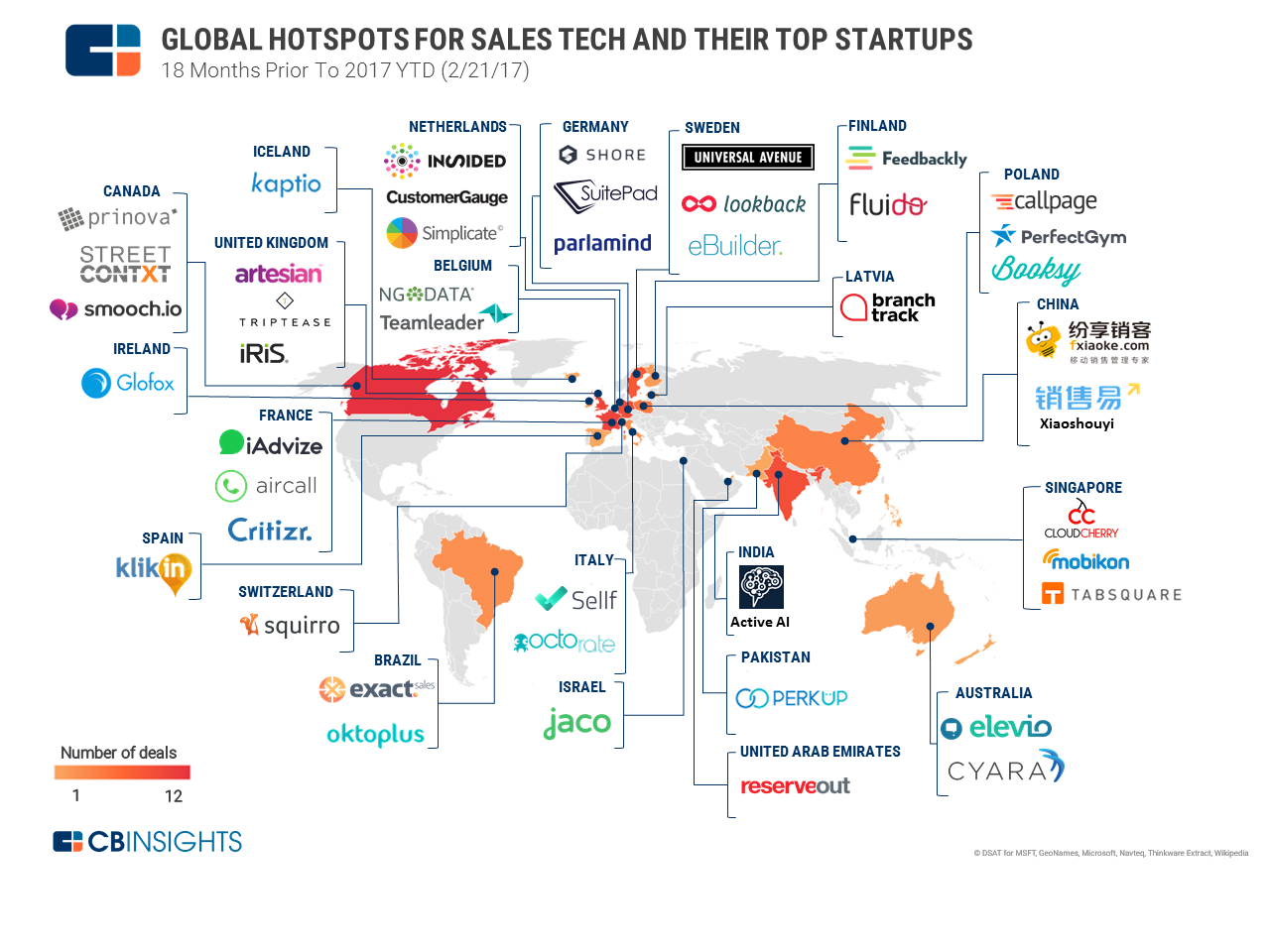 There have been deals to sales tech companies in 52 countries between 2012-2016, with the US as the dominant country for sales tech startup financing during that time period. Looking beyond the US, the UK and India each accounted for 4% of deals, while Canada and Germany each accounted for 3%. The remaining 21% of deals took place in 47 other countries. 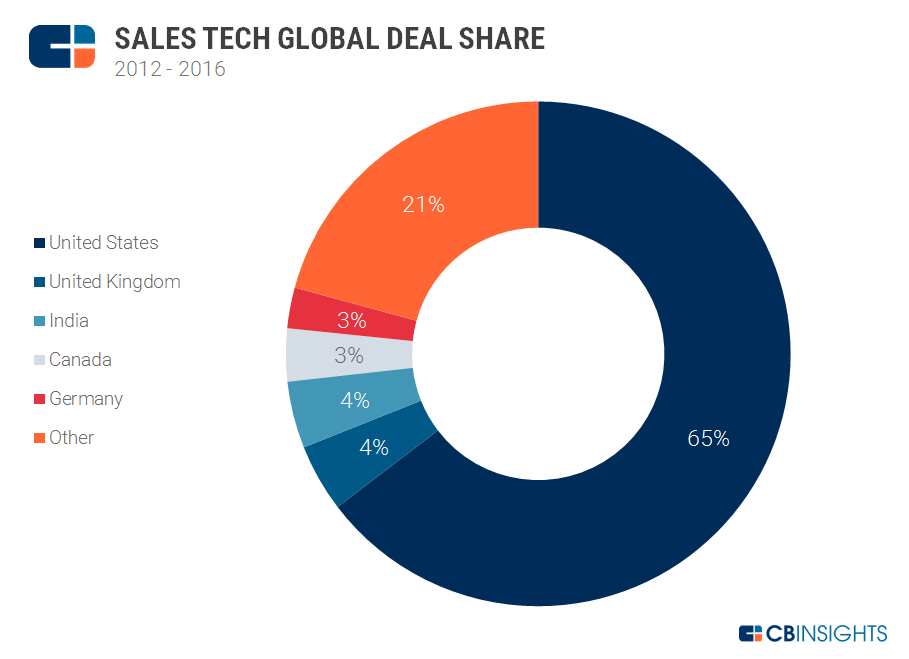 Examining international deals on a yearly basis, we can how non-US sales tech companies have begun to take a growing proportion of deals. 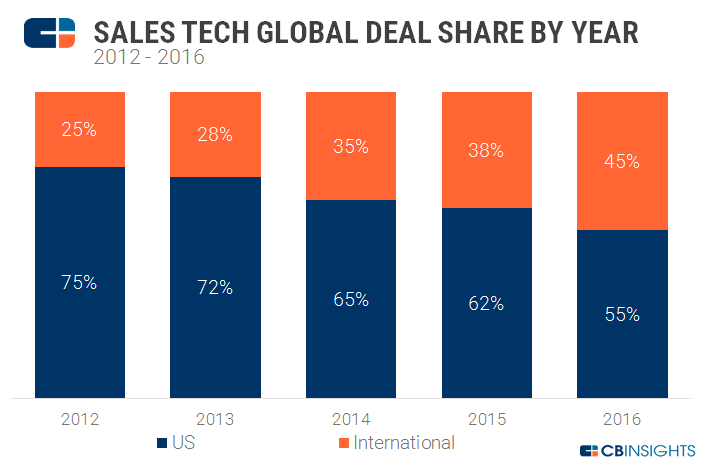 While deal activity internationally is on the upswing, the US still accounts for the vast majority of funding dollars to the sales tech category. Last year, international companies’ share actually dipped below 10%, after reaching a high of 21% in 2015. The decline in international dollar share last year is largely due to a few private equity mega-rounds in the US, including deals to American-based Infor ($2.5B) and Genesys Telecommuncations Laboratories ($900M). Dollars to international sales tech startups still grew by over $28M between 2015 and 2016. 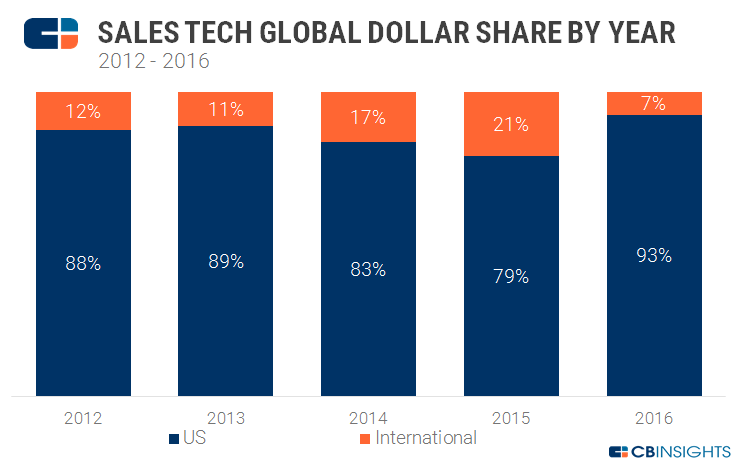 Want more data on sales tech? Log in to CB Insights or sign up for free below.