Research Brief
3930
Salesforce Ventures and 500 Startups are the most active VC investors in the space.

The significant increase in dollar funding from 2015 to 2016 was driven largely by a $2.5B private equity mega-round in Q4’16 to Infor, a provider of CRM and sales intelligence applications for mid-sized businesses. The company also raised $133M in a separate private equity round in Q3’16.

Other top deals of 2016 include: a $900M private equity investment in Genesys Telecommunications Laboratories, a company which offers a customer experience platform and consulting services to help clients increase customer engagement, a $88M Series D investment in Apttus, a provider of software that consolidates and streamlines the sales process; and a $70M Series E investment in FXiaoKe, a provider of mobile-based tools for sales teams in China.

Using CB Insights data, we analyzed funding trends from 2012 through 2016 in the sales tech space. We define sales tech to include companies developing tech-enabled solutions that directly serve sales teams or improve upon the sales process, as well as customer relationship management (CRM) platforms. We exclude companies that primarily focus on tech-enabled marketing or advertising.

In contrast to the deceleration in deal activity growth, total funding to the industry has grown at a rapid rate in the last year, up 205% between 2015 and 2016. However, as mentioned above, 2016 funding was driven by a private equity mega-round totaling $2.5B to unicorn Infor. The mega-round, funded by Koch Industries, accounts for nearly 50% of total industry funding in the year. Excluding that deal, total industry funding would have reached $2.5B in 2016, representing a sizable, yet more modest, increase of approximately 53% over 2015 dollars. 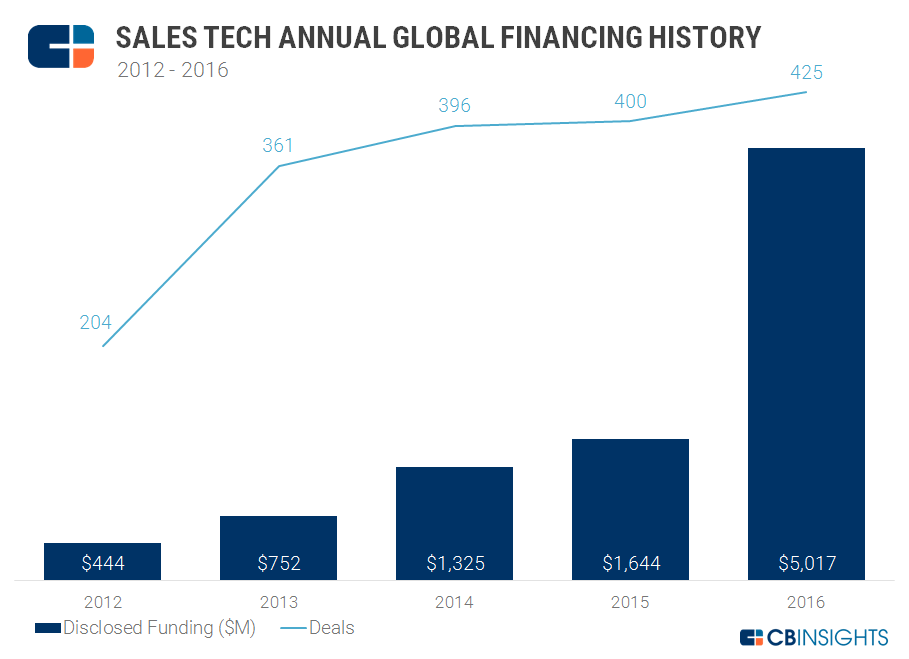 Nearly 74% of total funding to the category in 2016, more than $3.6B, was driven by Q3’16 and Q4’16 deals to these four aforementioned companies: Infor, Genesys Telecommunications Laboratories, FXiaoKe, and Apttus.

In comparison, the largest deal of Q1’16 was a $25M Series A investment in Cyara, a software platform that helps clients test and monitor the functionality of their systems related to customer experience (i.e. customer contact center). 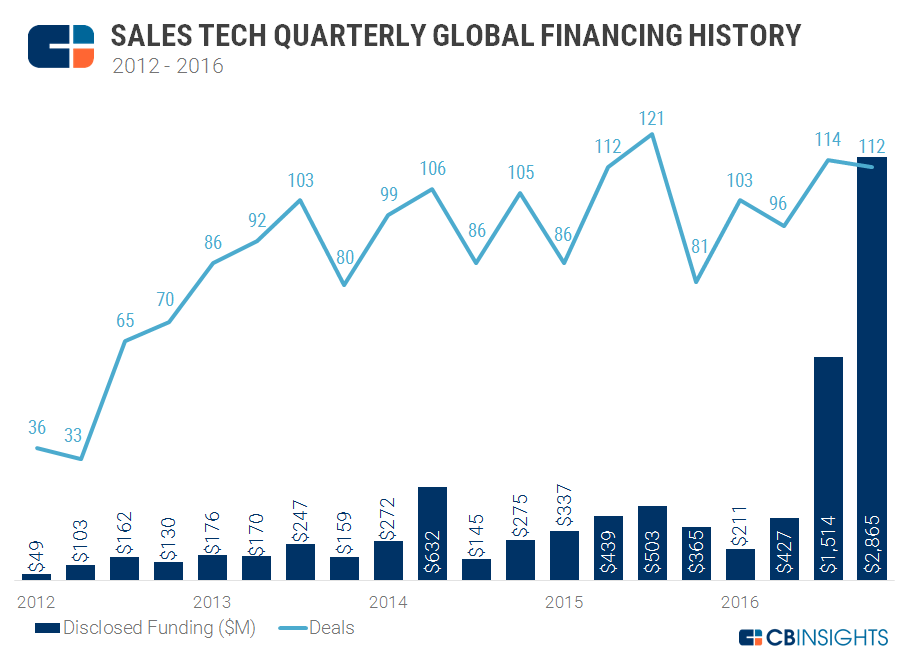 Although the number of annual sales tech deals has more than doubled since 2012, the distribution of investment stages has remained relatively static. Historically, approximately two-thirds to three-quarters of deals in the industry are in early-stage deals (Seed/Angel and Series A), with 2016 seeing the smallest share of early-stage deals at 66%.

This could point to increased maturity in the industry as investors allocate a greater share of deals to later-stage investments.

Our “Other” category, which includes minority investments by corporates along with convertible notes, accounted for 20% of deals in 2016. 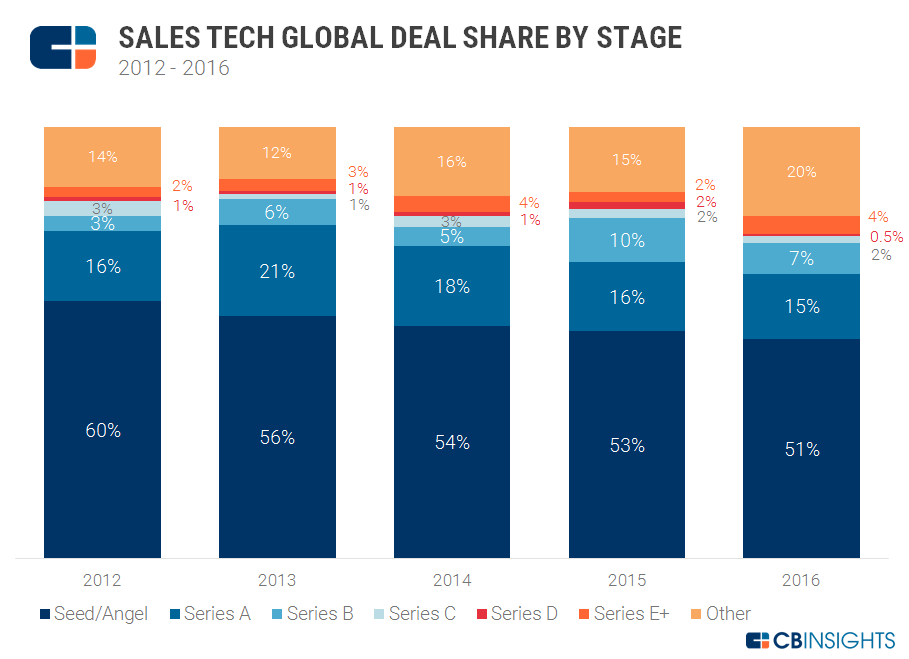 The largest early-stage deals in 2016 (including seed/angel and Series A) went to Takt, a machine learning customer personalization platform ($30M Series A) and Gladly, a customer service communications platform ($27M Series A). 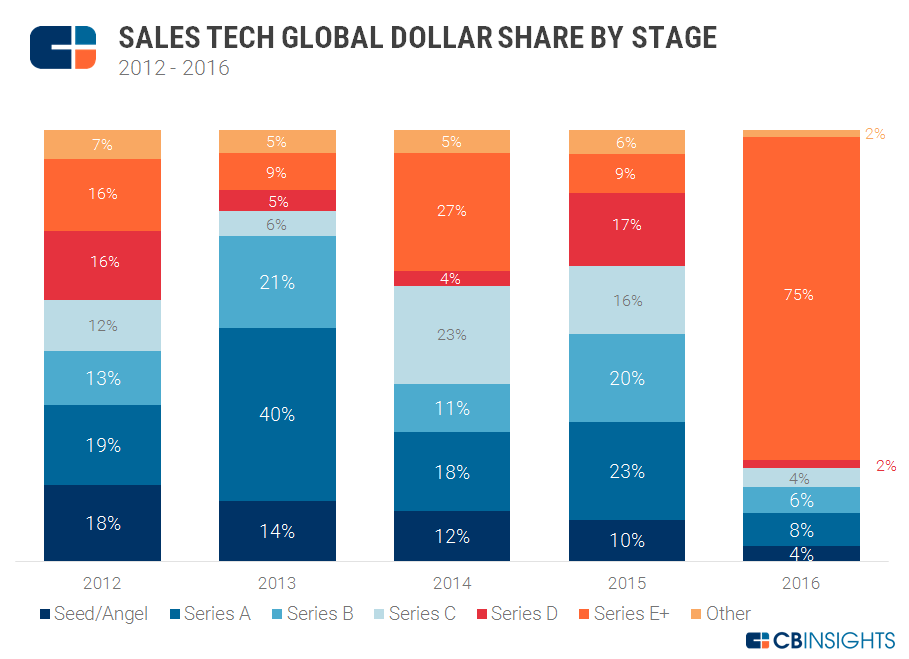 Salesforce Ventures claimed the top spot as the most active investor in sales tech companies between 2012 and 2016. Most recently, the company participated in a $50M Series B round of financing to Vlocity, a cloud CRM platform provider. 500 Startups, with investments in Intercom and ToutApp, and BoxGroup, with investments in Kustomer and SevenRooms, were the second- and third-most active investors, respectively.

The most well-funded sales tech company is Infor, having raised a total of $2.63B. After the company’s $2.5B private equity mega-round with Koch Industries in Q4’16, it has been valued at $10B. Genesys Telecommunications Laboratories, which received $900M in private equity funding in 2016, is now valued at approximately $3.8B.

Other well-funded companies on the list include Apttus, InsidesSales.com, and DealerSocket.  Apttus (mentioned above), a provider of software that consolidates and streamlines the sales process, has raised a total $274M in funding and is valued at $1.3B. InsideSales.com, an artificial intelligence sales acceleration platform, has raised $264M in total funding. Close behind, Dealersocket, a CRM platform for auto dealers that also offers sales solutions, has raised almost $240M to date. Nine of the ten companies on the most well-funded list have raised above $100M.

Want more data on sales tech? Log in to CB Insights or sign up for free below.