Research Brief
2270
Too many discussions of SaaS favor operational metrics over strategic questions. But magic numbers and CAC ratios are fairly poor at predicting success over the long run.

The following is a guest post by Max Wessel (@maxwellelliot), vice president at Sapphire Ventures (@sapphireVC)

In 2003, Emergence Capital broke news as a fund focused exclusively on investing in Software as a Service (SaaS). At the time, most investors were disillusioned with the cloud. The dot-com bubble had burst and capital retreated from the cloud to other areas. But Jason, Gordon, and Brian at Emergence made a bet that this cloud thing was here to stay. Over the last 12 years, they’ve proven the wisdom of their thesis, investing in a range of multi-billion dollar businesses at their earliest stages.

Since their point of trailblazing, SaaS has evolved. It’s standard. It’s a core buzzword in every investor’s vocabulary. If it’s not part of your thesis, you’re out of the club. Investors tout a mastery of the ratios and growth metrics associated with SaaS. Countless SaaS blogs dedicated solely to metrics have been written. To many it feels as if SaaS has become a science; as if any software product operated in the cloud, hitting the right numbers, is destined for greatness.

But here’s the rub. Just being a fast growth SaaS business isn’t enough. It never was. Somehow, as the market shifted from being ostracized to in-vogue, knowledge of what made certain SaaS companies great and others mediocre disappeared. Perhaps it’s because what drives greatness can’t be generalized in an easy-to-remember ratio. But that doesn’t mean it’s not worth talking about.

My belief is that what made the leading SaaS companies great is the same thing that’s made all technology companies great. Namely, great strategies and deep products. Metrics like magic numbers and CAC ratios are just byproducts of strategy and execution. But they’re muddled ones at best, impacted by a combination of factors, and fairly poor at predicting success over the long run.

SaaS is a clean slate, not a strategy

During every major architectural shift in the history of computing, new winners in the development and delivery of software emerged. The shift to cloud computing brought the promise of the same changing of the guard. At the turn of the 21st century, cloud software held the promise that businesses wouldn’t need to manage servers or be responsible for painful software updates. A lot of infrastructure needed to be built to get to that future. Once it was built, however, cloud would allow innovators reimagine the way software companies worked.

The promise of SaaS was a clean slate.

Unfortunately, SaaS’ clean slate doesn’t translate into universally interesting business opportunities. Just as there were many uninteresting software companies in the era of client-server, there are plenty of crummy SaaS businesses. The short history of the industry has seen that proven over and over. Some SaaS businesses plateaued over time. Some faded as new competitors emerged.

Some even got so far as to IPO, before losing their luster. It’s my opinion that the same things that differentiated good from bad businesses in on-premise era are things that differentiate good from bad businesses in SaaS. The good businesses build competitive advantage by placing great strategies alongside great product. Good SaaS is sticky, with high barriers to entry, and increasing value over time. Bad SaaS is easily replaced.

These may appear to be basic observations — and certainly, good investors stress that great SaaS companies need great strategies — but too much of today’s conversation about software in the cloud shirks strategic questions in favor of discussing operational best practices. I took a list of the top SaaS blogs for entrepreneurs and scoured their contents for key terms and phrases related to two categories: Strategy Concepts and SaaS Metrics. If you look at the below chart you’ll see that depending on where an entrepreneur turns for content, they can actually end up deluged with discussion of the operational numbers absent the strategic questions.

Certainly, there are places for columns and advice focused on sales execution; it’s a critical part of any software business. However, it’s important that entrepreneurs and investors new to the game think deeply about the strategy side of the business. Many would-be pundits will turn towards metrics first because it’s easier to generalize across very different companies when you have a single number to point towards. I’ve been known to do the same.

But only focusing on the metrics is not helpful because having the right SaaS metrics is necessary for any business — but it’s not sufficient to build a great company. It’s not even that good an indicator of how businesses perform over the long run.

In a recent analysis we did at Sapphire, we looked at the performance of public SaaS companies post-IPO based on their sales efficiency from year one. If having great “SaaS metrics” really was the indicator of having a great SaaS business, you’d expect the results to look like this: 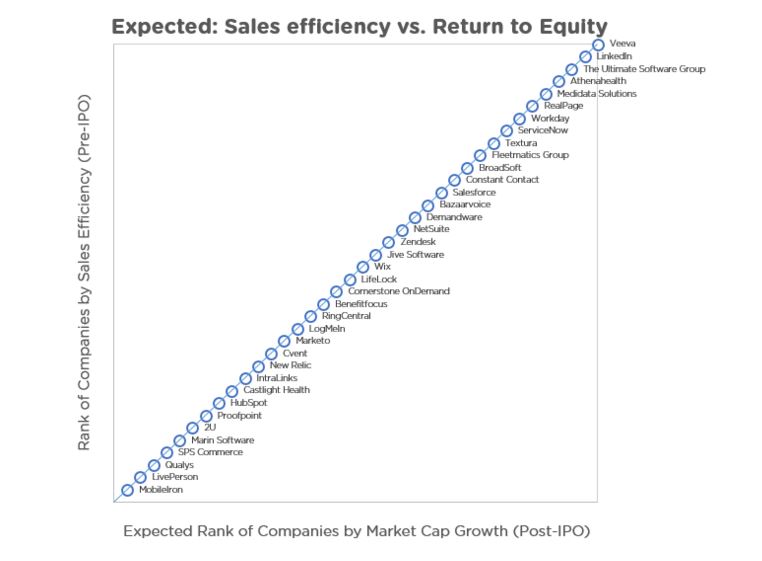 Instead of that 1:1 correlation, the real picture looks a lot different. It’s a lot messier with almost no correlation at all. 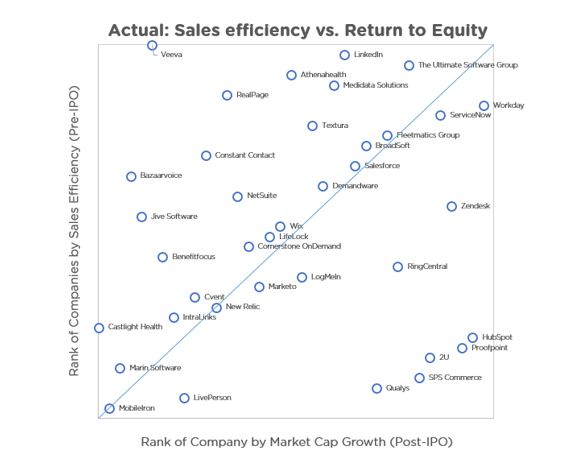 We don’t have information for companies across stages of the private markets. But I’d venture to guess that the picture doesn’t look too different. Issues of competitive advantage dictate the long term viability of a business. Regardless of how strong your sales numbers are in a given quarter, if your business is built on a shaky strategic foundation it’s not going to hold together indefinitely.

What Makes a Good SaaS Strategy

At Sapphire, when we talk about great strategies, we talk about businesses that build things like platforms, networks, and proprietary data sets. Each of these characteristics of a business helps establish increasing returns. While most products in the world prove less valuable to each incremental customer (the first people to buy a new Nintendo Game theoretically want it the most), products that drive increasing returns actually are more valuable to later adopters than the early adopters with the biggest problems to solve (Salesforce’s ecosystem ensures the company provides a lot more value to recent converts than the initial product did to early adopters). If you’ve established increasing returns, the metrics can be a lot more forgiving. You might not be able to grow as quickly or as efficiently as some competitors, but you’ll be able to keep growing with lower risk of seeing your business attacked.

For entrepreneurs looking to identify the “Increasing return” strategies in SaaS that are most interesting, I’d point them towards businesses that accomplish at least one of three things:

At its simplest level, network effects are the most basic way software companies drive increasing returns. With every incremental LinkedIn user, value is created for the entire network. The more folks there are on the platform, the easier it is for salespeople to find customer contacts, for recruiters to find job candidates, or for job-seekers to get their names out there. That means that as LinkedIn grows, the product itself gets more and more valuable. As it gets more valuable, it becomes harder to displace, enabling it to charge more, deliver incremental service, and drive ever higher profits.

The advantages of increasing returns go far beyond just building network effects. Companies that build ecosystems can be equally difficult to displace — even when those ecosystems aren’t composed of millions of users. When there are a group of companies or people invested in the success of your business, it becomes ever more challenging to displace that core. Consider Oracle and SAP’s grip on the systems integrators that configure and deploy corporate IT systems. With just a few dependent players (players like Accenture, Deloitte, Infosys, or TCS), Oracle and SAP established strong barriers to entry for new vendors. Today, we see Salesforce making the same maneuver through the easy access to developers they’ve enabled on their Salesforce1 platform. Developers around the world turn to them as the first choice in CRM because their livelihood depends on that access — despite the fact that many new innovative solutions have entered the market with arguably better CRM and marketing products.

The last thing I look for to differentiate the interesting from the uninteresting SaaS businesses are those that establish information feedback loops. Machine learning is everywhere in the valley. Google, Microsoft, Amazon, Facebook, and IBM are all investing hundreds of millions of dollars in improving the ability for machines to perform previously cognitive tasks. The more the machine can think, the less you need people to perform tasks.

But a critical component of machine learning is having training data — millions of rows of information about inputs and outcomes. Some SaaS businesses have built the collection of this data into their model by creating feedback loops. By monitoring how users react to different image placements in emails, for instance, marketing automation vendors can apply algorithms that learn where the optimal placement should be. With each new outcome they observe, their algorithms improve, learning what works and what doesn’t. Even when new vendors emerge with sleeker looking software, it’s unlikely that they’ll ever be able to generate good enough recommendations to win the market.

SaaS created a blank slate. But a business needs more than a blank slate to be dominant.  Dominant businesses need a strategy that not just differentiates them, but also separates them from a horde of potential entrants over time. The best so-called “SaaS” investors are constantly looking for the strategies that will deliver just that. Unfortunately, we don’t spend nearly enough time talking about those strategies and too much time talking about their byproduct: the metrics.

This article is subject to the following disclosures from Sapphire Ventures (http://sapphireventures.com/disclosures/)

Note: The calculation of strategy discussion is based on a benchmark of the ratio of key sales operations terms relative to key strategy terms within each respective blog. It meant to be directionally correct, though not scientific.

Max Wessel is a vice president at Sapphire Ventures, a venture capital firm focused on helping growth-stage software firms scale. In addition to his role at Sapphire, Max serves on the World Economic Forum’s Global Agenda Council and frequently collaborates with the Forum For Growth And Innovation, Clayton Christensen’s think tank, where he served as a senior research fellow.