Analyzing the top sectors, stages and geographies for investment and M&A among the tech & telecom companies in the Russell 2000.

While Google, Facebook and other large cap public tech companies get a lot of attention for their M&A and investment activity, the Russell 2000, a market index of 2000 publicly held small-cap stocks, might be worth paying a bit more attention to.

According to CB Insights investment and M&A data, acquisitions by Russell 2000 small-cap tech and telecom companies have soared in 2014 – jumping to nearly 200 2014 year-to-date.

This analysis looks at the top sectors, stages and geographies for M&A among IT and telecom companies in the current Russell 2000 Index as well as the top acquirers among them. We have also tracked a number of investments by the Russell 2000 firms. Most of the activity for these firms is on the M&A front. A summary of the data & trends follows:

The six-year investment and M&A trend by Russell 2000 tech and telecom firms is highlighted below: 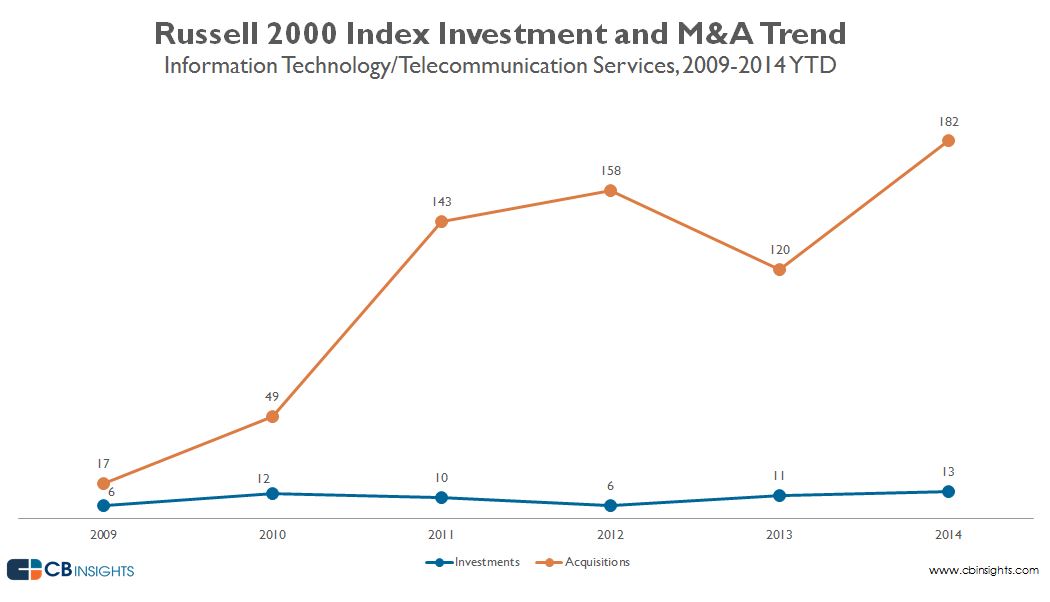 At the sector level, Internet, mobile and software companies made up 1/2 of all private company M&A activity by the Russell 2000 Index. Electronics and computer hardware rounded out the top 5, taking 11% of total M&A activity each by small cap tech and telecom publics since 2009. 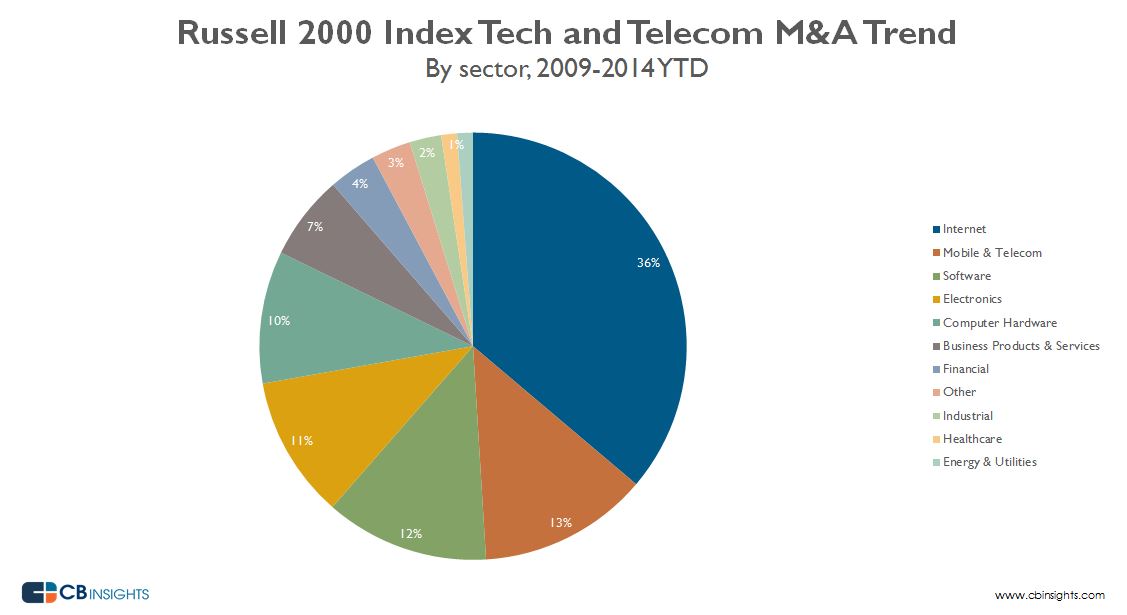 Interestingly, 2/3rds of companies acquired by Russell 2000 tech and telecom firms received no known funding prior to acquisition. This is perhaps to be expected given the typical market cap of Russell 2000 companies is smaller (on average ~$1.3B) and there are better deals to be had among companies that don’t have the pressure of providing VC-level returns. 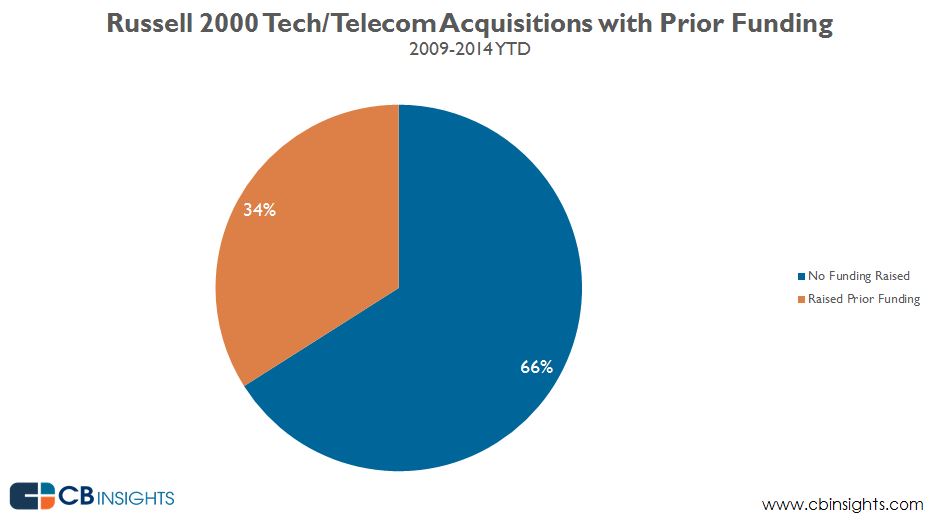 Of the acquired companies that did raise funding, most companies (43%) were acquired at the early-stage (after angel/seed/Series A) while mid-stage startups represented another 27%. 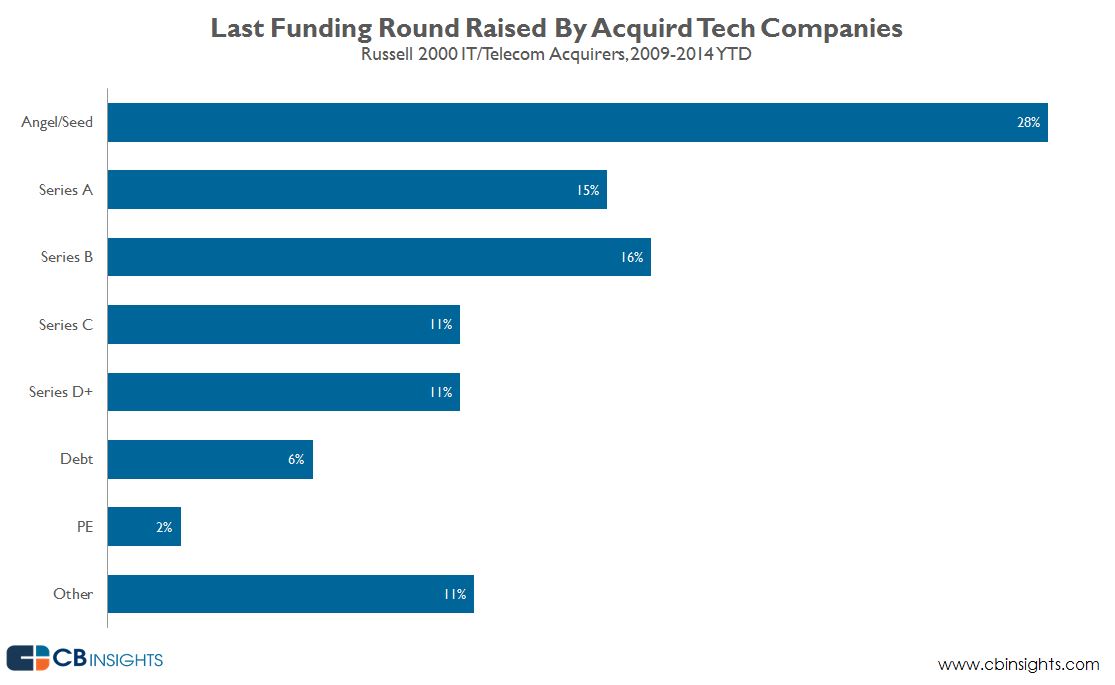 Since 2009, 71% of M&A by Russell 2000 tech and telecom companies went to U.S.-based companies. And within the U.S., we see that 35% of Russell 2000 tech/telecom acquired firms were based in California. 8% of acquisitions went to Massachusetts while 7% went to New York. Other states that saw 10+ acquisitions by small cap tech and telecom firms over the period include Arizona, Georgia, Pennsylvania and Maryland. 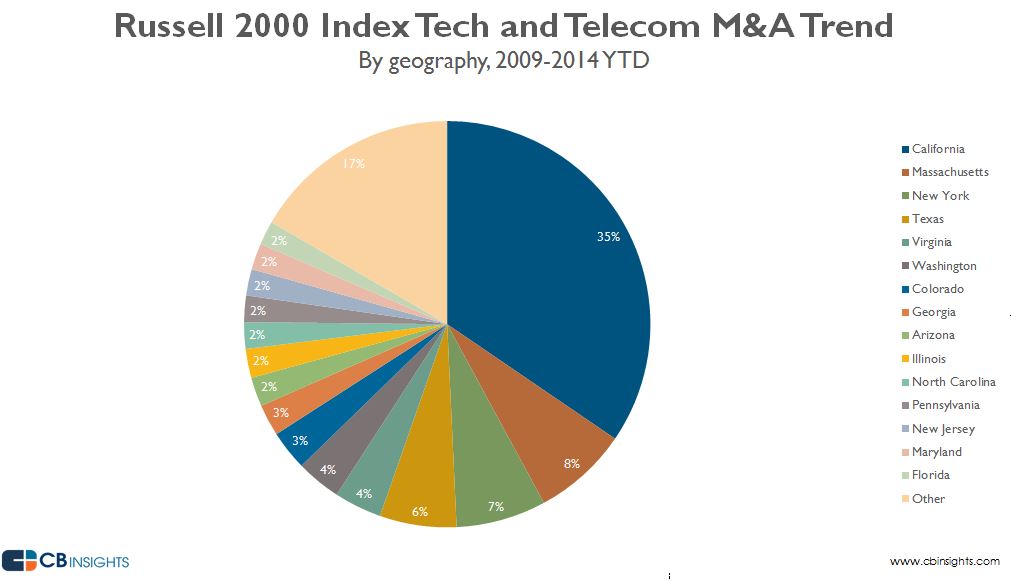 The most acquisitive Russell 2000 tech/telecom firms

Since 2009, the most active acquirer among small cap tech and telecom firms was J2 Global (NASDAQ: JCOM), a Los Angeles-based Internet services provider. Among the other top 5 most active acquirers were web-based property management firm RealPage (NASDAQ: RP) and IT consulting firm Perficient (NASDAQ: PRFT). A full list of Russell 2000 tech/telecom firms with 7 or more acqs over the period is below:

Want to track the M&A and investment activity of the Russell 2000? Check out the CB Insights database. Sign up free below.