Ahead of a potential IPO, Rocket Internet companies are raising billions from some big-name investors.

The Samwer Brothers’ Rocket Internet is often dismissed as a copycat factory, but with a valuation of $5.7 billion (due to a recent $582M investment from United Internet) and a possible IPO, the German incubator/holding/investment firm is doing something right. We posited they might be more valuable than Y Combinator earlier which stirred some great debate.

Earlier, we’d highlighted that Rocket Internet companies brought in over $1.1B in funding between July 2012 and July 2013 including from big-name investors including Summit Partners, JP Morgan, NEA and PPR. But according to CB Insights data, that figure has now more than doubled a little over a year later.

With huge $50M+ financings to companies including Foodpanda, HelloFresh and Linio just in the past few months, total disclosed funding to Rocket Internet-incubated companies now totals more than $2.24B since July 2012. The most well funded of the bunch are Lazada, Dafiti, Zalora, Lamoda, Linio and Zalando – all fashion or multi-product eCommerce companies in emerging markets.  Rocket Internet’s copycat companies are often, in fact, able to raise more funding than the original company. 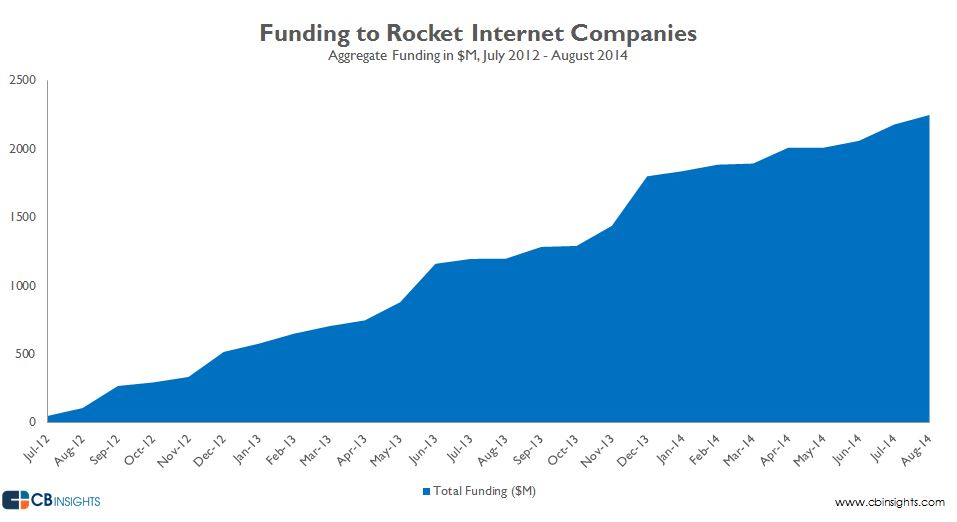 Want all of Rocket Internet’s portfolio and investment data? Or need more venture capital financing and exit data? Check out the CB Insights Venture Capital Database. Sign up free below.