Rocket Internet's clones have no issues raising money - lots of it.

Rocket Internet recently received an investment from Philippine Long Distance Telephone Company which valued them at $4.45B. Then eight days later, they raised another $582 million from United Internet who took a 10.7% stake in the German incubator/holding/investment firm. This investment gives Rocket Internet a valuation of $5.7 billion.

Rocket Internet is often derided as a copycat or clone creator, but like it or not, Rocket is clearly doing something right. Most recently, Foodpanda, a GrubHub/Seamless competitor born out of Rocket Internet, raised a $60M series C from Rocket Internet and Falcon Edge Capital.

So how do Rocket Internet clones compare to the companies they are mimicking from a financing perspective?

The first chart below details total funding for a variety of Rocket Internet clones versus their US competitors. In only two instances, Glossybox and HelloFresh, have the Rocket Internet variants raised more money than their US competitor. HelloFresh is actually a clone of Swedish company Middagsfrid, but we opted to compare them to their closest US comp, BlueApron. Notably, both HelloFresh and Glossybox operate in the same geographic markets as their competitors (Glossybox and HelloFresh both entered the US Market to compete with Birchbox and Blue Apron respectively). This direct competition in the US market is rare for Rocket Internet companies, which often operate in markets that the “original” companies have not penetrated yet – including many emerging markets. In some instances, the clone takes market share and gets acquired by the “original” business. This happened with CityDeal, a German Groupon clone which Groupon subsequently purchased in 2010 for $100M.

In all other cases, the “original” company has raised more (often substantially more) than the Rocket-backed companies. Despite total funding figures being lower, Rocket Internet has opted to raise large amounts very quickly in some instances. For example, Wimdu, an Airbnb competitor, raised a large $90M growth equity round in 2011 just months after its founding to accelerate growth internationally. At the time, there were rumors of a $100M funding round for AirBnB (this round eventually closed as an $112M Series B from Sequoia Capital, Greylock Partners, and others just a month later). 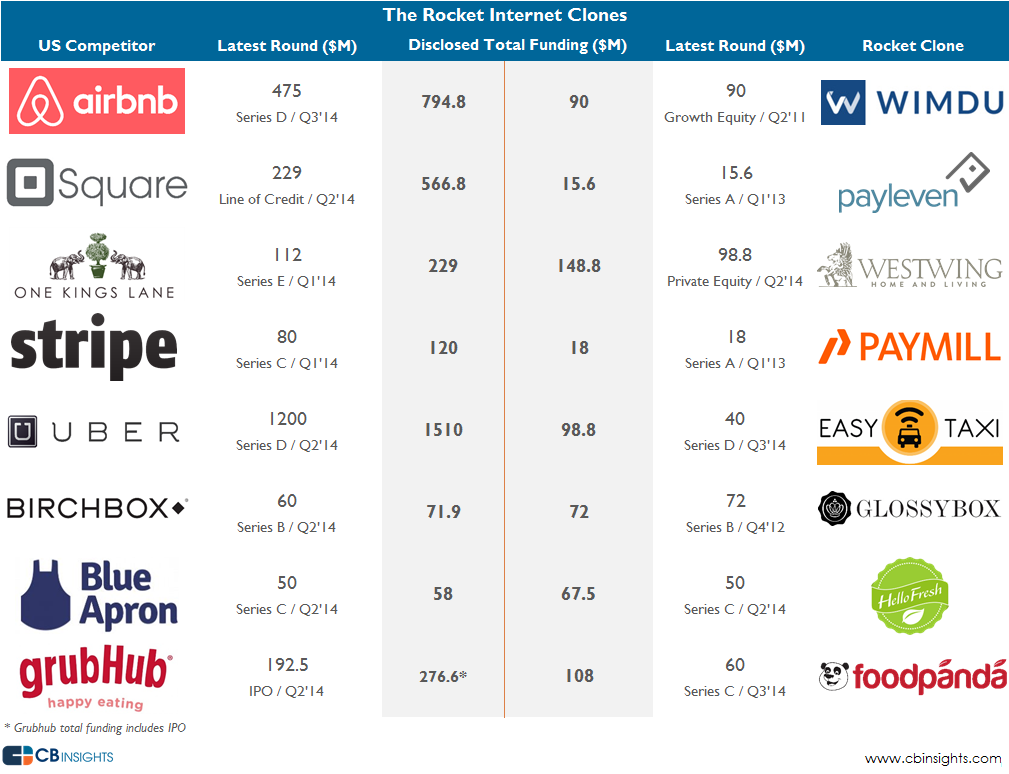 Despite lower total funding figures, many Rocket Internet Clones have raised larger amounts of funding in comparable rounds versus their competitors as can be seen below. This holds in all cases except in the EasyTaxi/Uber comparison. 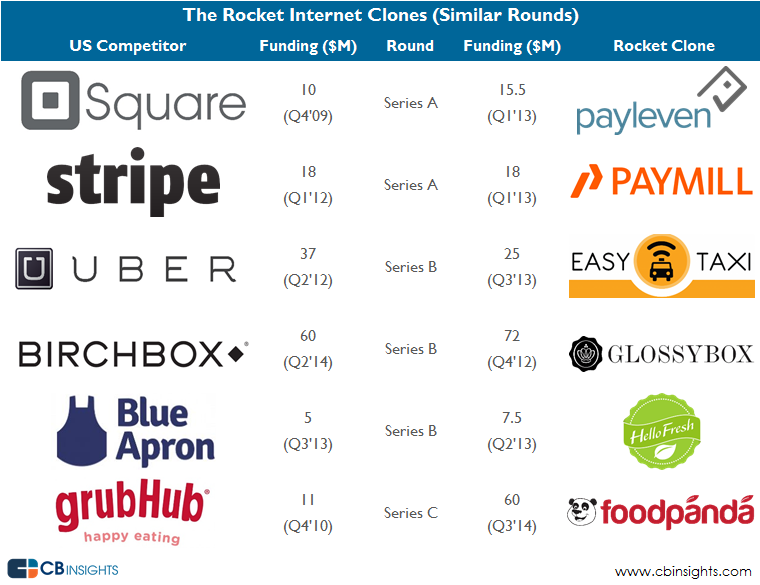 Rocket Internet has had a slew of newer Clones start up in the past few years that have yet to raise disclosed outside funding. These companies include SpaceWays (Makespace/Boxbee clone), Lendico (Kabbage), and Helpling (Homejoy/Handybook). The Sawmer brothers, who run Rocket Internet, have a philosophy of investing heavily in clones that work and shutting down those that don’t, so it will be interesting to see what happens in the future with these clones.

For more data on Rocket Internet’s investments and the companies it funds and their competitors, logon to CB Insights or create a free account below.