Research Brief
2553
Investors are piling into robotics. Funding to the category, excluding drones, was up 115% in 2015. Innovation Works, Intel Capital and High-Tech Grunderfonds were the most active VC investors.

Funding to private robotics companies nearly doubled in 2015, reaching a record high in deals and dollars.

Already in 2016 (through 3/21/16), nearly 15 companies, including Restoration Robotics, Savioke, and 5D Robotics, have raised an aggregate of $89M in funding across 15 deals.

Our robotics category excludes drones, but includes robotics companies focused on process and manufacturing automation, agricultural automation, surgical applications, and personal/social robots. Together, the companies have raised more than $1.4B in cumulative funding since 2011.

Our analysis includes all equity funding rounds and convertible notes, but excludes debt.

The highest funded round in 2015 was a $150M growth equity round raised by Auris Surgical Robotics, which is backed by investors including Lux Capital, Mithril Capital Management and NaviMed Capital.

Except for a 2013 slowdown in the rate of growth, robotics deals have been nearly doubling year-over-year. 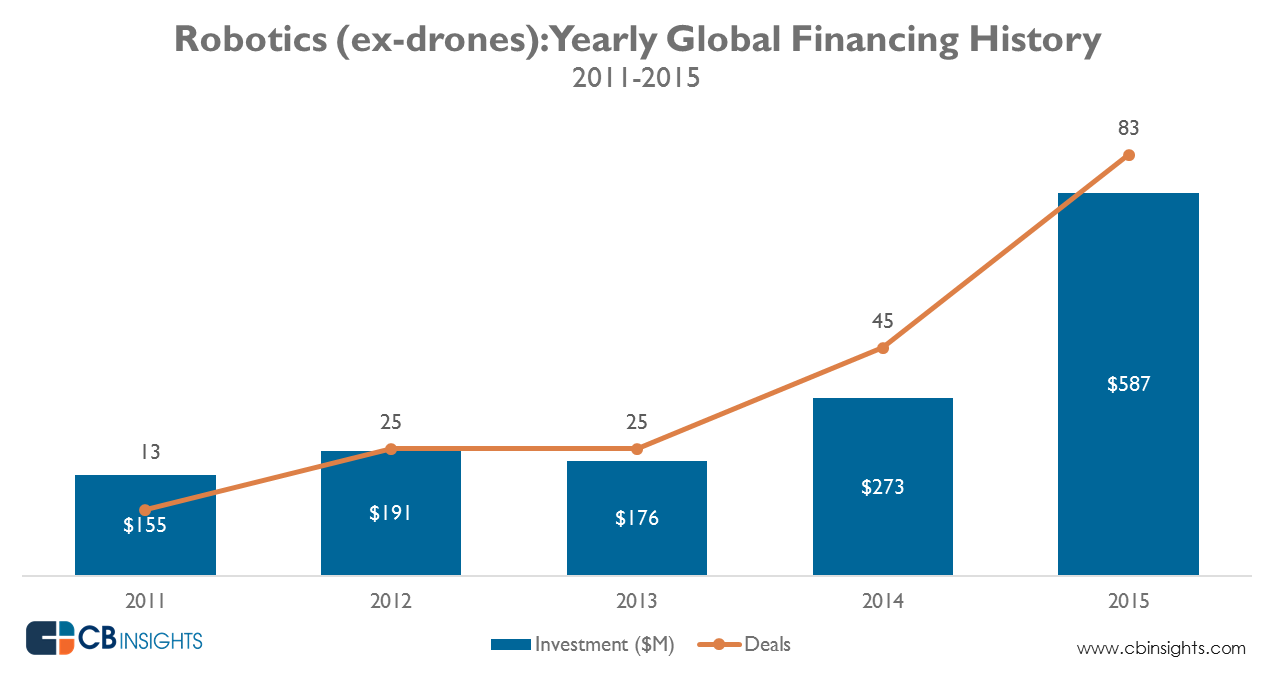 Q2’15 saw the peak in deal count. Over 20 companies across 7 countries raised financing. That quarter, Beijing-based Ninebot raised an $80M round, backed by investors including Sequoia Capital China and Shunwei Capital Partners.

Funding dropped by almost 74% in the last quarter of 2015 on a quarter-on-quarter basis, though deal activity remained nearly the same as in Q3’15.

So far in Q1’16, funding has recovered from the slowdown in the previous quarter, but the numbers are still not on pace to equal the funding levels seen in the first three quarters of 2015. 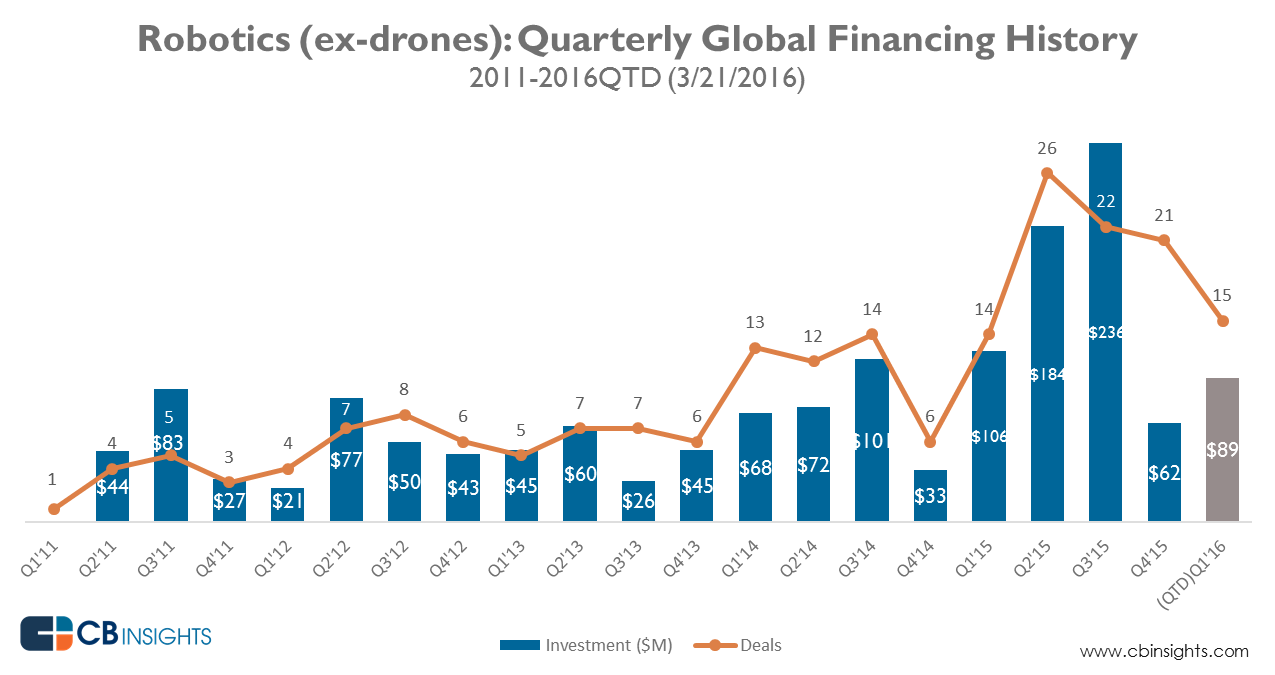 Late-stage deal shares (Series D and E+) have been low across the years, reaching a five-year low of 6% in 2015.

The “other” category includes convertible notes, corporate minority rounds, and equity rounds not attributed to a particular stage. 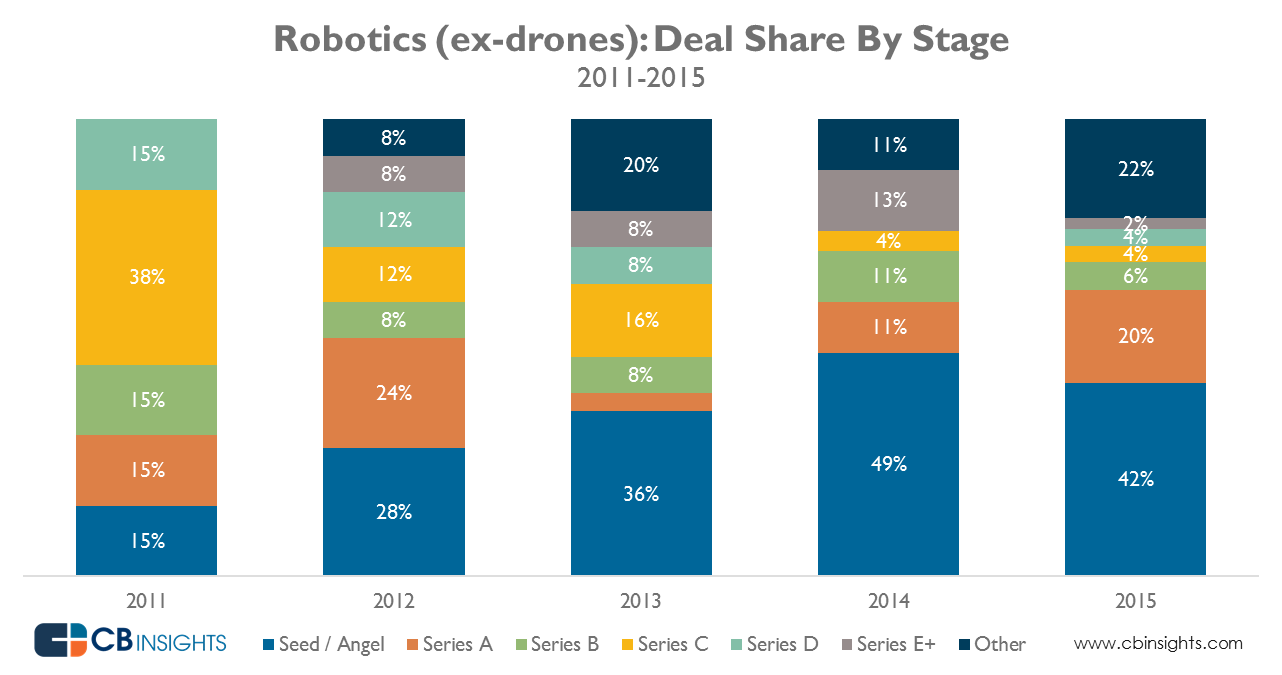 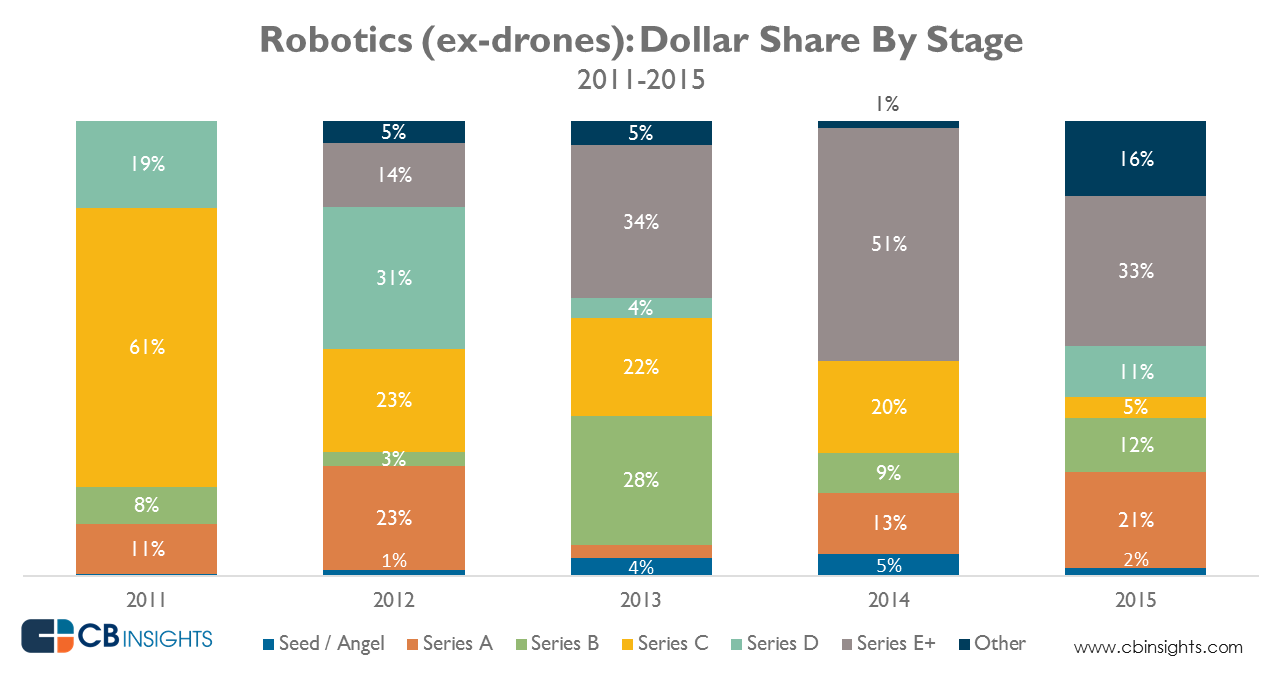 Pittsburgh-based Innovation Works was the most active VC investor in robotics, having invested in over 5 unique companies. Just in the last year, the VC seed-funded HEBI Robotics, Titan Robotics, Capsen Robotics, and IAM Robotics.

Intel Capital and Germany-based seed-stage investor High-Tech Grunderfonds were tied for second place. Since January 2015, the former has backed companies including Savioke, PraFly, and Ninebot, while the latter has invested in REVOBOTIK and Bionic Robotics.

The rankings are based on equity funding raised by these companies.