In-store technology startups raised 42 funding rounds worth $170M in total in Q1’17, a major jump from Q4’16. With the vast majority of deals going to early-stage companies (through seed investments or Series A deals) the segment still seems to be in growth mode.

Despite the buzz around e-commerce, 90% of retail sales still takes place in stores. Nonetheless, the industry is evolving, and dozens of major retailers face store closures amid changing consumer habits. This puts even more pressure on retailers to optimize in-store operations. In-store tech startups aim to help.

We define the in-store technology category as startups providing retailers with software and hardware specifically to improve in-store operations. These are B2B startups providing in-store sensors and beacons, interactive digital displays, staff management platforms, point-of-sale tools, and more. Check out our in-store tech infographic here for a better idea of the diversity of the category. This sector does not include startups that focus solely on the restaurant industry, which we’ve looked at separately here (though some startups are included in both segments).

In Q1’17, in-store tech startups attracted $170M across 42 deals, a 62% jump in deal count and an 83% increase in funding dollars compared to Q4’16. These numbers are more comparable to the first three quarters of 2016, when the sector saw over 40 deals each quarter—Q4’16 was somewhat of an anomalous drop. To date, Q2’16 holds the record high for quarterly deals, with 54.

The largest deal of Q1’17 went to Zenreach, a San Francisco-based startup that works with offline businesses to set up free guest Wi-Fi systems, which can then track store visitors and visitor demographics and design and deploy personalized marketing campaigns. Zenreach raised a $30M Series C from First Round Capital, 8VC, Bain Capital Ventures, Founders Fund, and other investors (including Ashton Kutcher and Kevin Durant). The deal pushed Zenreach’s total funding to $80M, and it’s now among the top ten most well-funded in-store tech startups.

The quarter’s second-largest deal went to Swedish startup Soundtrack Your Brand, which raised a $22M Series C from Northzone Ventures, Balderton Capital, and others. Soundtrack Your Brand has raised $42M in total to help businesses manage music playlists in stores, and tailor soundtracks to suit the company’s brand. 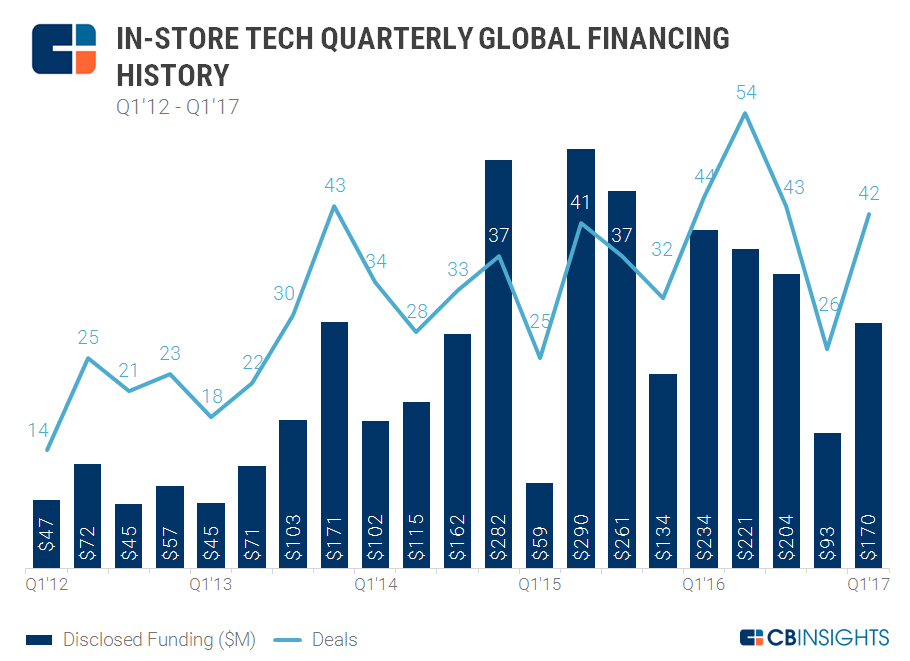 Point-of-sale loyalty platform FiveStars raised the largest deal of 2016, with a $50M Series C in January from DCM Ventures and others. The SF-based FiveStars has raised a total of $90M to date. 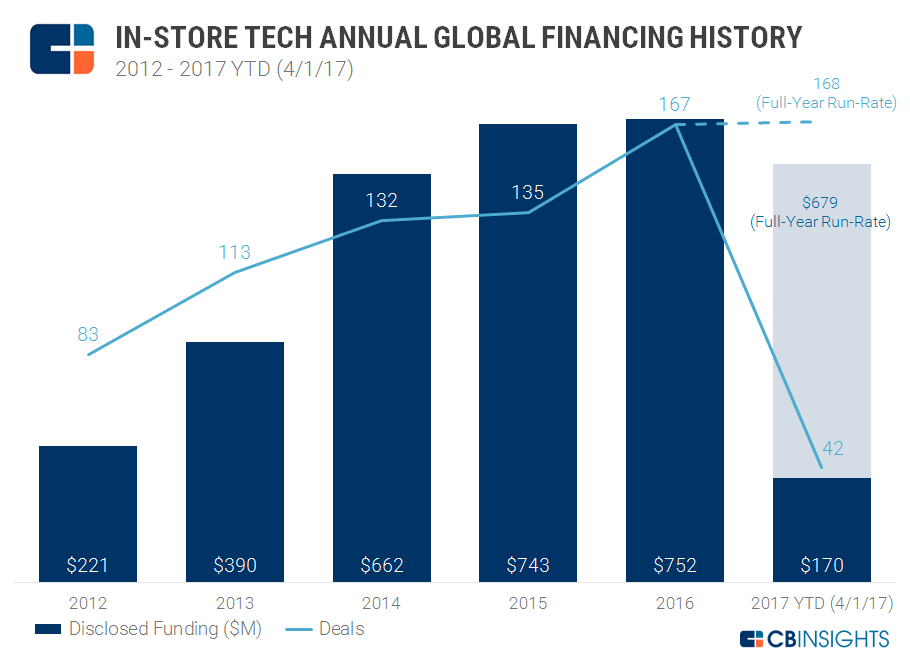 The three most well-funded startups in the space all focus on helping retailers offer on-the-spot financing plans in stores to shoppers. The top startup on our list, Toronto-based Flexiti Financial, promises instant, mobile, paperless application and processing for financing plans at the point of sale, and works with 1,000+ stores.

Startups working on optimizing retail have the potential to change how consumers shop in store. Sign up for a free trial and look for CPG & Retail Innovation in the Collections tab.

Also on the list, we see platforms for in-store shopper tracking, store management software, and loyalty platforms to help retailers offer cash back and other rewards to shoppers. Several investors have backed more than one startup on this list, including Tribeca Venture Partners (Zibby and Shopkeep POS) and Activant Capital Group (RetailNext and Shopkeep POS).

Want more data on startups disrupting the retail industry? Log in to CB Insights or sign up for free below.