Even as investors are pulling back on e-commerce, retail corporates are making big acquisitions.

From increased investment to in-store tech startups, to the development of next-gen distribution methods, to trends among retail corporates, we look at the most important developments shaping retail.

Funding to startups offering technologies for use in-store is rising to an all-time high this year. These technologies, ranging from store management platforms, to wearables for store staff, to beacons for in-store analytics and proximity marketing, are on track to see over 170 deals worth nearly $800M in total this year. 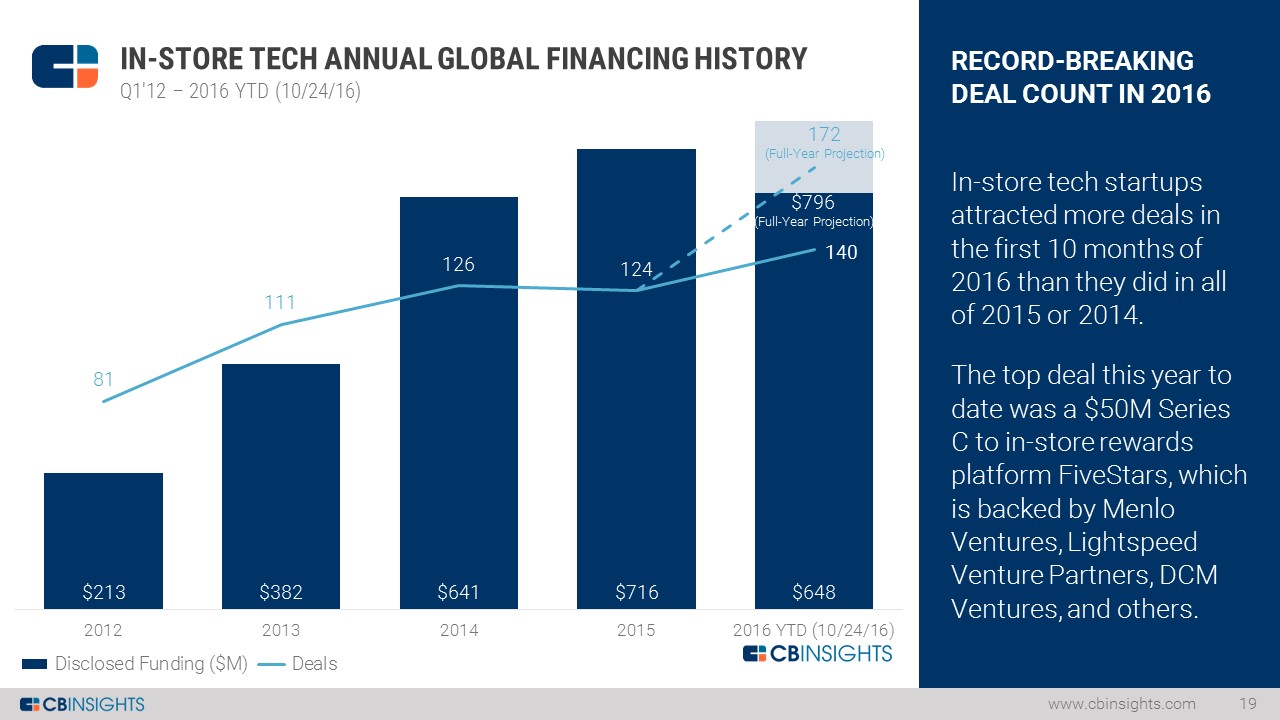 In an even more positive signal for in-store technology, smart money VCs are also ramping up their investment activity. Notable deals with smart money participation this year include a $19M Series B to Index, a software platform for offline retailers, and a $30M Series B to Zenreach, a platform that provides guest Wi-Fi systems and traffic analytics to retailers and cafes. 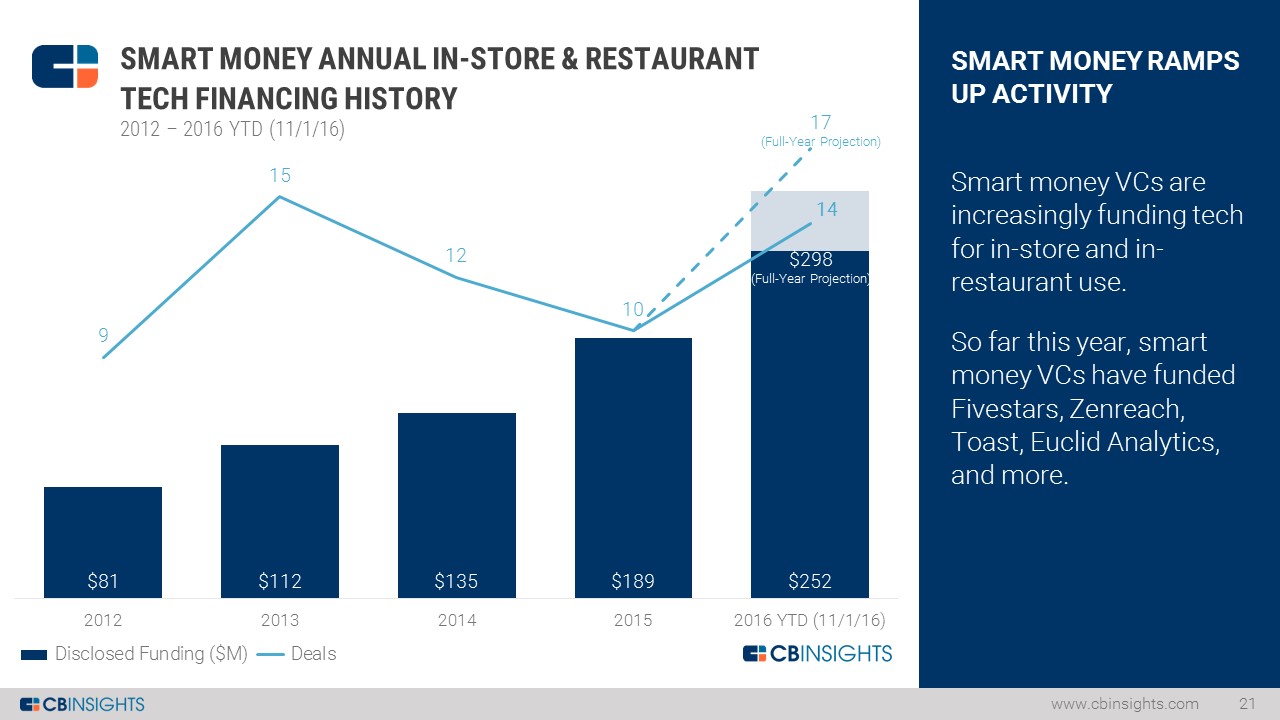 The market map below highlights the growth in diversity of in-store technologies. Categories including point-of-sale financing options, connected beacons and sensors, interactive in-store displays, robots and chatbots for in-store use, and even music management systems for retailers have become crowded with startups. 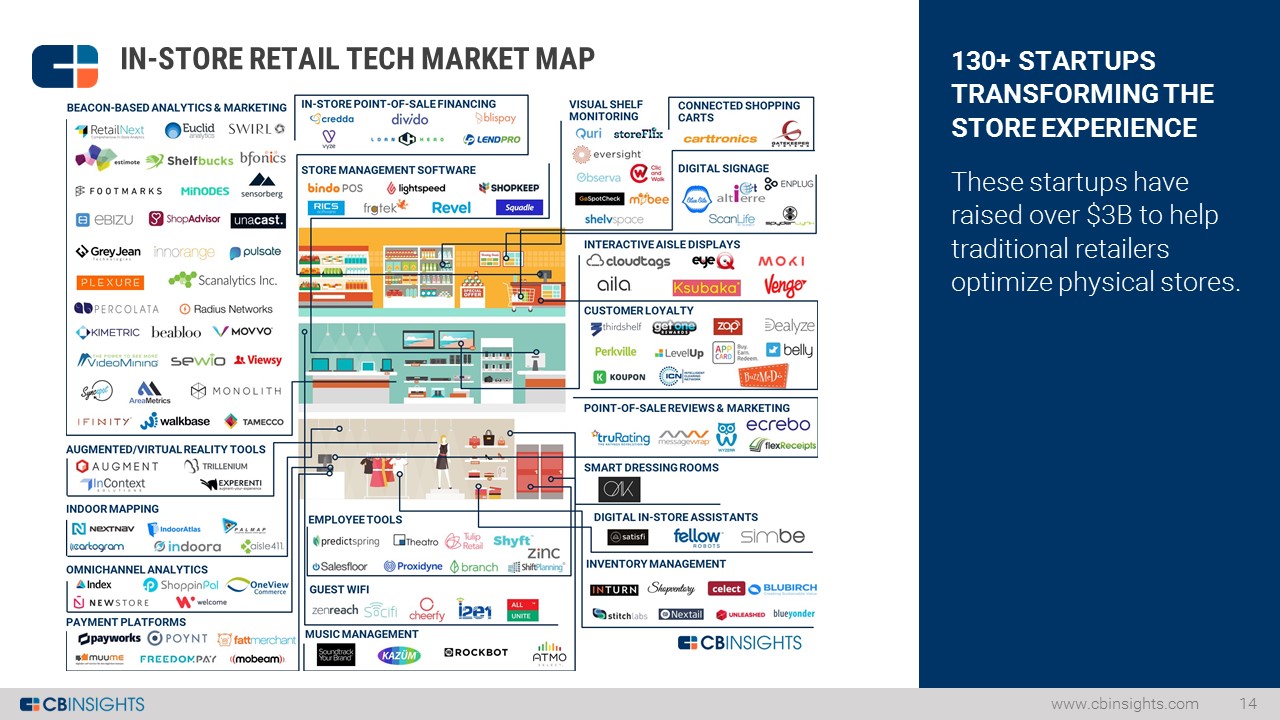 Startups working on tech for brick-and-mortar retail have the potential to upend the industry. Look for In-Store Retail Tech in the Collections tab.

4. New distribution methods bring the transaction to the consumer

While technology can help turn stores into valuable data collection centers, other technologies are enabling a greater dispersion of the point of sale than ever before. Some of these separate the consumer from the purchasing decision. Personal styling services and subscription services, for example, curate selections of items for the customer, eliminating the need for a customer to choose a brand. Others aim to make purchasing as instantaneous as possible. For example, Kwik and Hiku produce connected at-home devices, similar to Amazon Dash buttons, that let customers quickly re-order items by voice or by pressing a button. Cargo, another next-gen retail distributor, helps Uber drivers sell packaged goods to riders from the backseat of their cars. 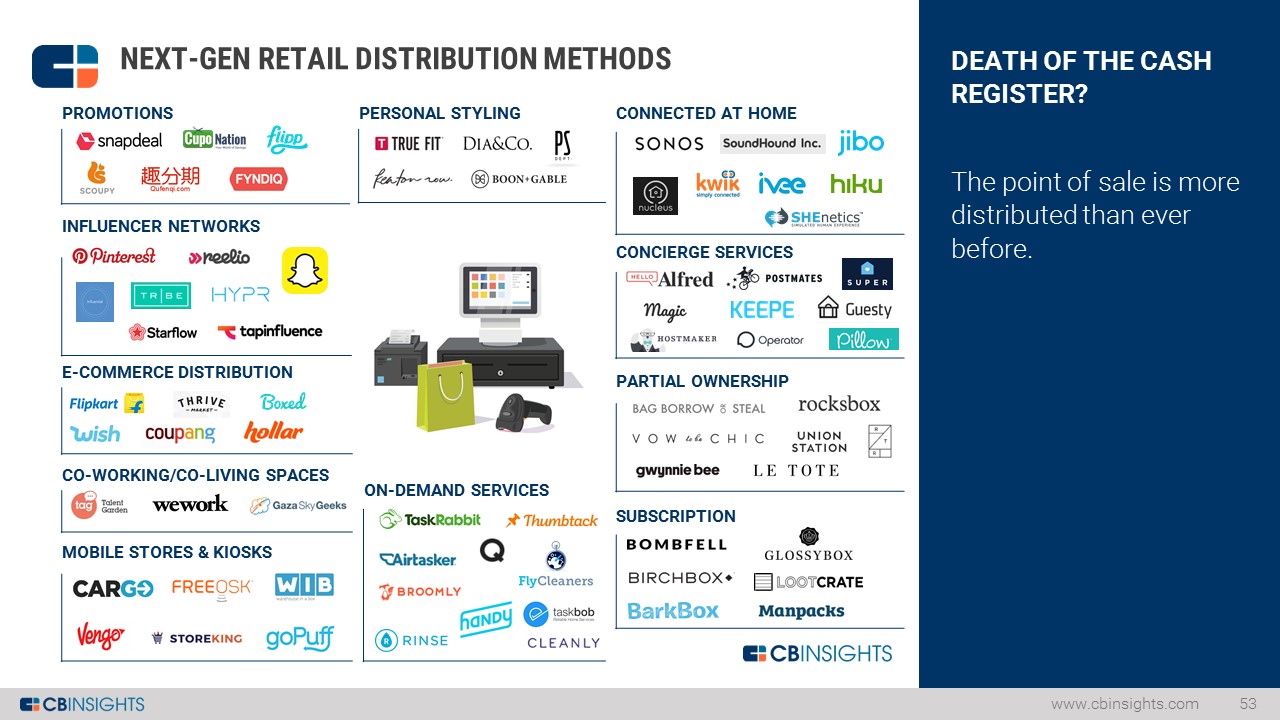 While in-store tech is seeing a rise in investor interest, the much larger e-commerce category is in a slump. Investment into the space has declined dramatically this year. Deals to e-commerce startups are on track to fall below 2013 levels in 2016. 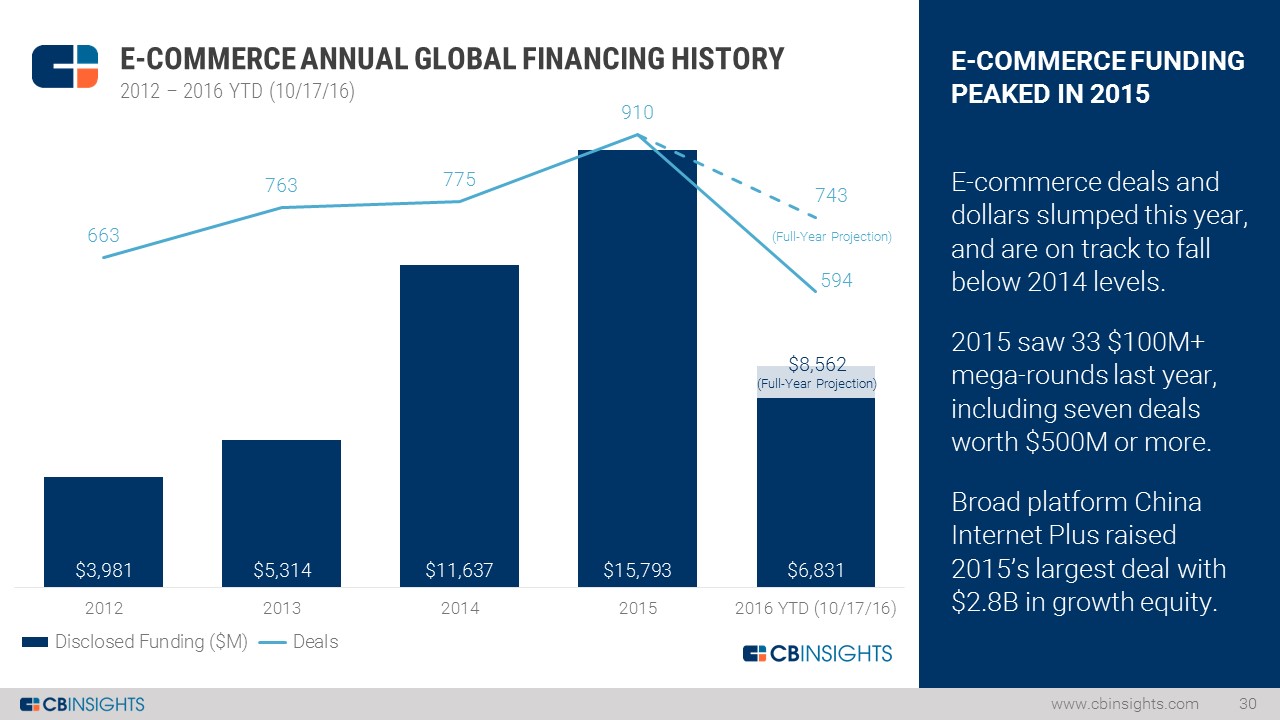 6. Smart money VCs have pulled back even more on e-commerce

In contrast to the increased excitement we saw among smart money investors toward in-store tech, smart money VCs are pulling back on e-commerce even more dramatically than investors in general. They began turning away from e-commerce earlier than other investors, as well, with deals falling in 2015 even as total deals among all investors reach an all-time high. 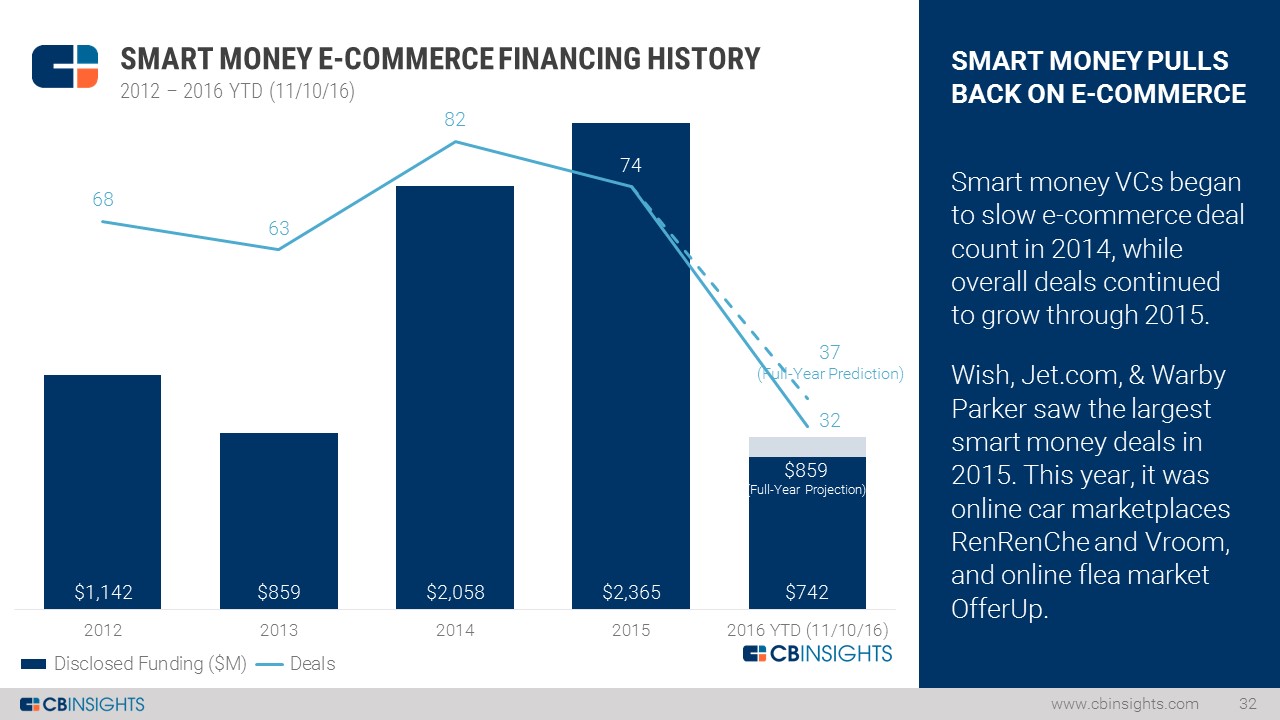 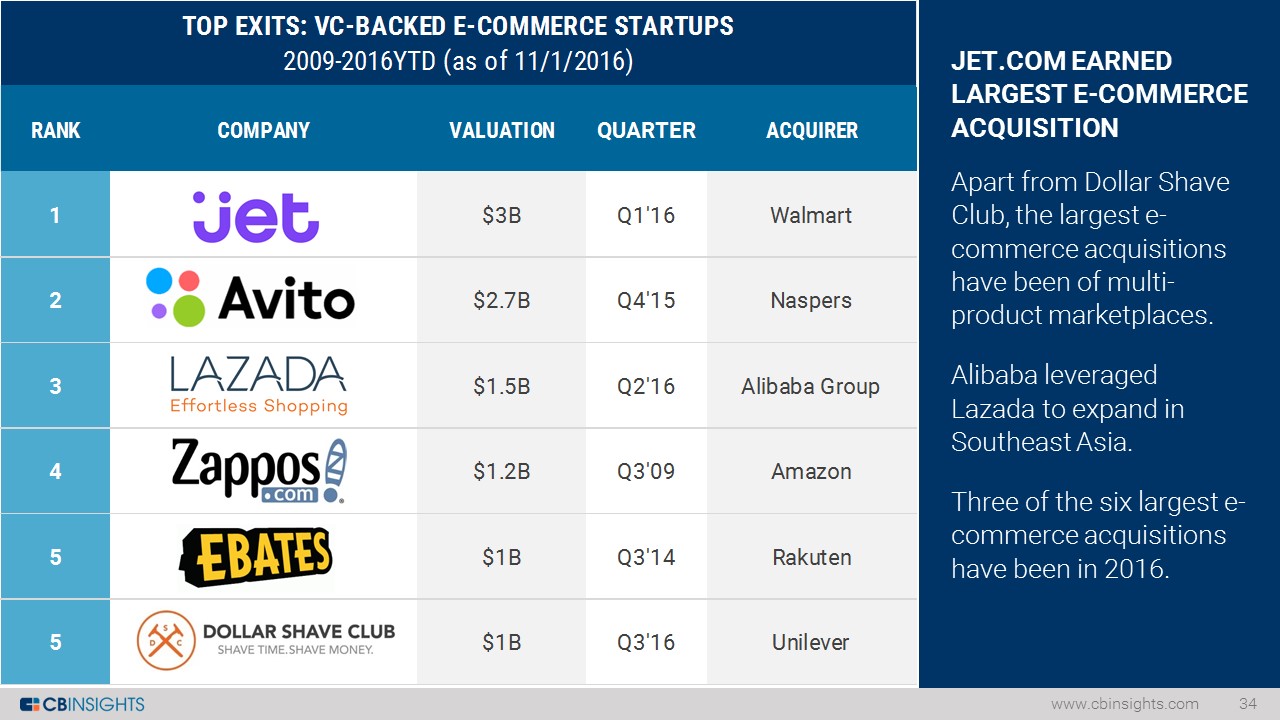 Walmart has been particularly innovative in acquisitions, with four acquisitions of digital startups since 2012. Most retailers have been less active. Furthermore, based on our analysis of all investments and M&A deals by top US retailers since 2010, most deals have been focused on taking on new product lines rather than investing in technologies that could more fundamentally impact business processes. Traditional retailers have yet to seriously leverage startups as “outsourced R&D,” but going forward, there is certainly plenty of innovation coming from startups, which could continue to transform retail in the future. 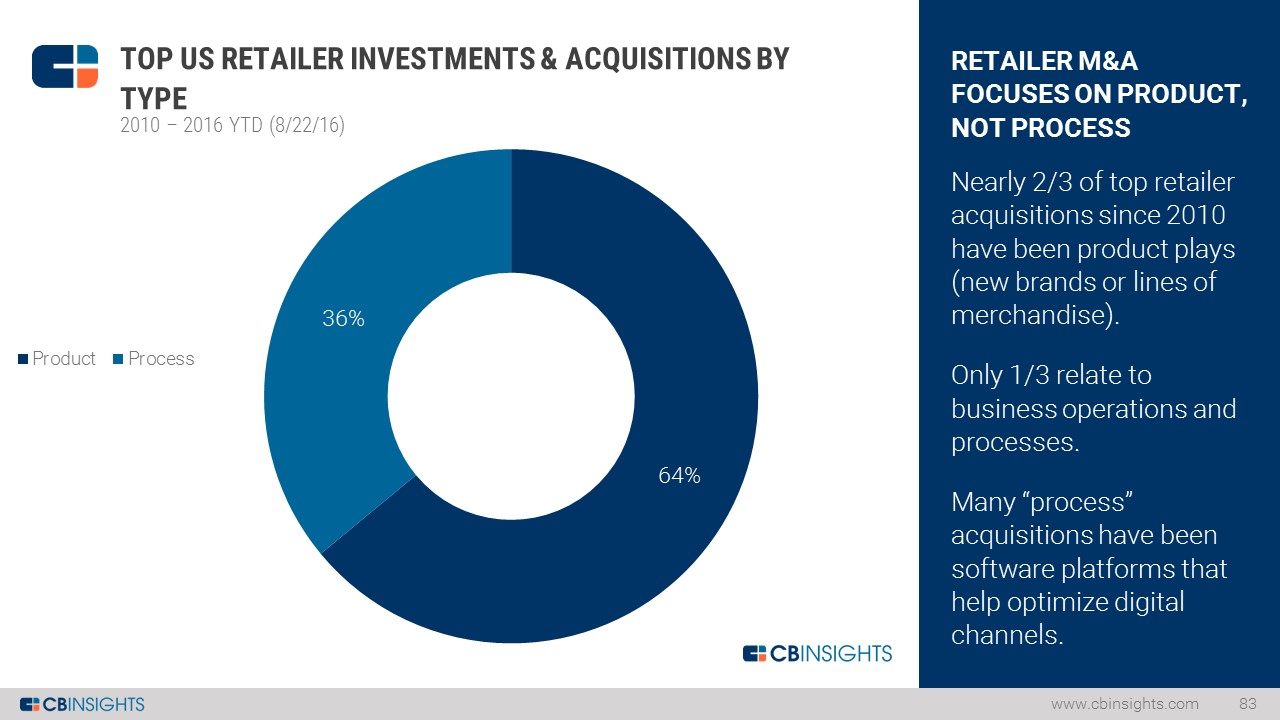