Though deals fell in Q4'16 from their Q3 peak, the restaurant tech sector has attracted over $550M each year since 2014.

Startups offering new technologies to the restaurant industry raised $550M across 111 deals in 2016, a very slight drop in deals and dollars from the sector’s 2015 peak.

Our restaurant tech analysis looks at startups providing hardware and software solely for restaurant management, including tablets that let diners order from their tables, inventory management software, restaurant staffing apps, and more. It does not include restaurants themselves. Check out 99 of these top restaurant tech startups in an infographic here.

FiveStars, a San Francisco-based provider of customer loyalty programs, raised the year’s largest deal with a $50M Series C in Q1’16, from Lightspeed Venture Partners, Menlo Ventures, and others, bringing the company’s total funding to $90M. FiveStars lets consumers check into physical locations via mobile to earn rewards, which staff can manage at the point of sale.

The NYC-based Olo, which offers white-label online ordering and delivery platforms to restaurants, ranked second with a $40M investment from The Raine Group. Olo has raised $62M in total, and works with over 160 brands including Chipotle, Jamba Juice, and Five Guys. 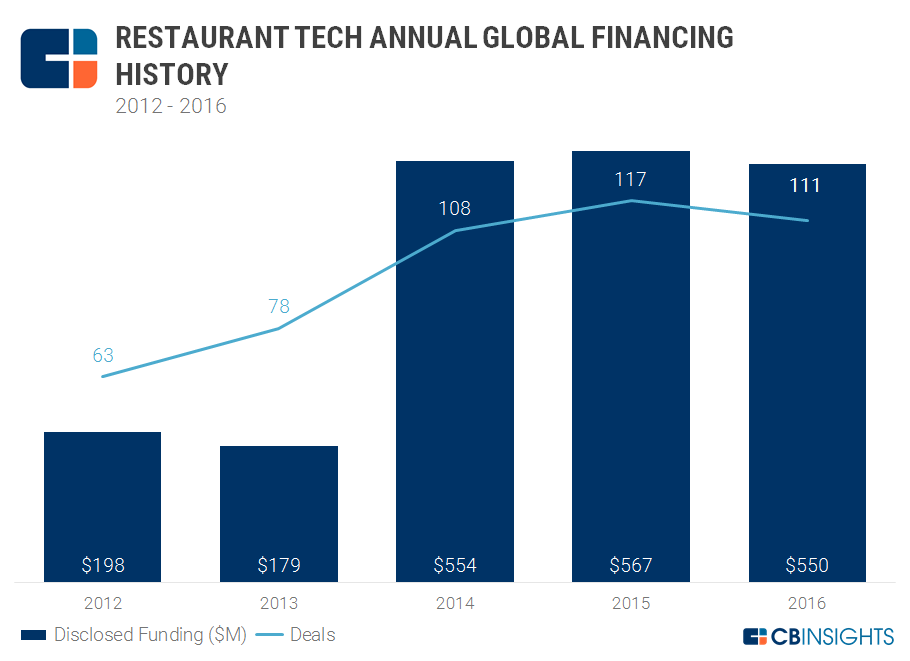 From a quarterly perspective, deal count hit an all-time high in Q3’16 with 35 deals. However, that number dropped to just 23 deals in Q4’16, adding up to $106M in funding. Appetize attracted the quarter’s largest deal, in a $20M Series A. Appetize provides an integrated point-of-sale system for food and beverage sales in hospitality, sports, and events spaces. The company got its start through the LA Dodgers-sponsored startup accelerator program.

In second place, customer relationship platform Thanx raised a $17M Series B from Sequoia Capital and others, followed by a $13M Series B to Social Tables, a platform for venues that manage large dining events. Thanx and Social Tables have each raised a total of $23M, while Appetize has $20M in total. 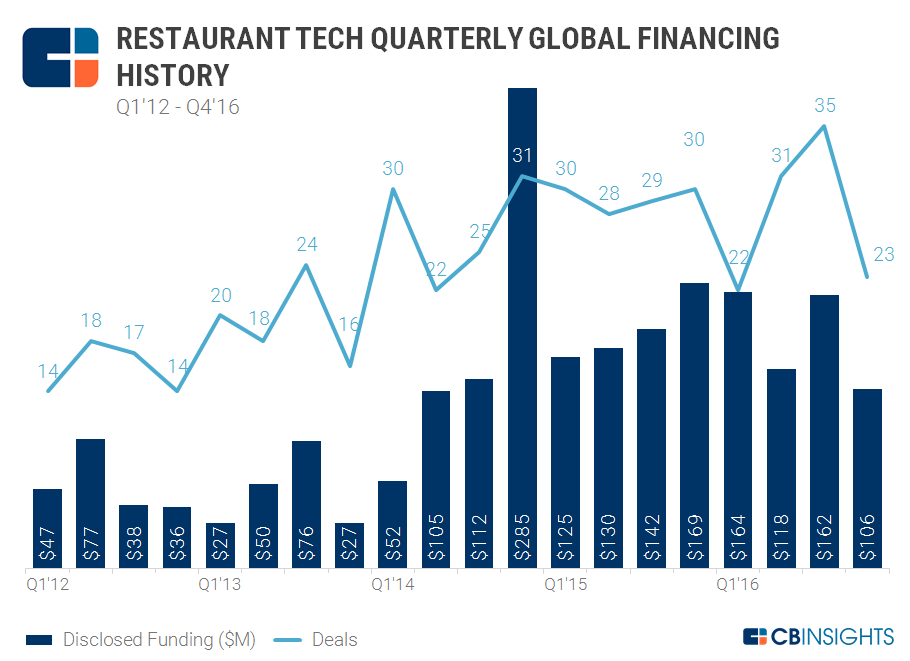 Startups working on restaurant technologies are changing the dining experience. Sign up for a free trial and look for Restaurant Tech in the Collections tab.

When we look into the concentration of investment deals by stage, we see that restaurant tech remains a young industry, with over 40% of all deals consistently flowing to seed-stage companies. However, we also see a notable increase in the share of Series B deals over the past five years, indicating that startups are indeed beginning to mature and attract further funding rounds.

The share of deals in the “other” category, which includes corporate minority investments, has also increased since 2012 as corporations have paid more attention to restaurant tech. Interestingly, Yelp and Groupon each entered corporate minority deals with restaurant tech startups in 2016 — Groupon with Upserve, a restaurant management software provider, and Yelp with Nowait, a cloud-based platform for restaurants to manage seating and lines, and to notify guests by text message when their table is ready.
The sector has seen very few Series D+ deals so far. 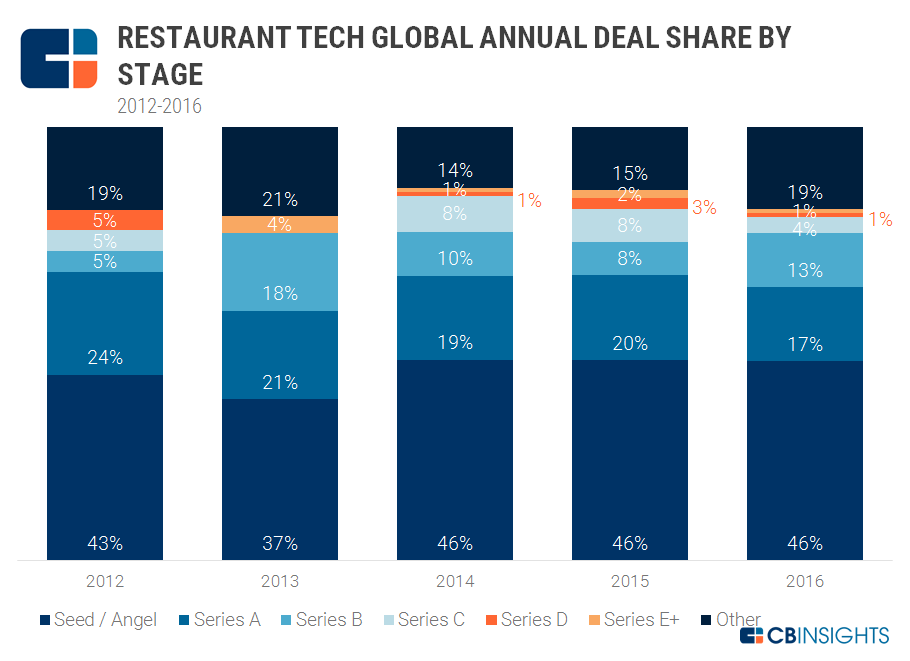 Want more data on food tech and restaurant tech financing trends? Log in to CB Insights or sign up for free below.