The online direct home sales startup Opendoor Labs, valued at $1B, is transforming how residential real estate is bought and sold.

As US home sales have recovered, hitting a ten-year high, a crop of companies with venture capital backing are wagering a big bet that they can use technology to transform home sales.

Companies like Zillow and Redfin have used technology for over a decade to advertise listings, provide tools to improve agent efficiency, or alter the agent’s role in the home sale. But a new group of startups are employing data and operational efficiency for a different real estate use case — to price and purchase homes outright, taking on a good deal of risk, but also setting themselves up for much greater upside.

In this model, a company purchases a home directly from a homeowner, improves it, and lists it on the market as fast as possible. Tech-enabled house flipping essentially.

The company gains from whatever appreciation might occur, and protects itself from downside (depreciation in the home price) by taking a fee from the homeowner tied to its own estimate of the home and market risk. For the seller the benefit is a faster, simpler home sale, and potentially lower real estate transaction costs.

The leading company in the direct home-buying space is Opendoor Labs. Opendoor stands out because of how quickly it has grown. The company has raised $320M in just 3 years — with a roster of big-name investors — and achieved unicorn status in that time.

Opendoor largely operates in “second-tier” real estate markets throughout the US, including Phoenix, Dallas, Atlanta, and others. And our jobs listings data indicates that new markets will be opening soon, in San Antonio, TX and Charlotte, NC.

The company has been aggressive in going after homes in these markets, reportedly deploying $100M a month to purchase and improve homes.

That capital-intensive approach has meant that in addition to raising significant equity funding, the company has taken on extensive debt. All this financial risk comes with immense upside, however. Opendoor has captured nearly 3% of home sales in Phoenix and Dallas. If it can achieve just 1% market share of national home sales it could achieve revenues greater than $1B.

In this report, we use CB Insights’ platform to examine Opendoor’s strategy, how it is changing the enormous residential real estate market, and the other competitors chasing the direct online home buying opportunity.

Customers interested in selling their home can go to Opendoor, and if their home meets Opendoor’s criteria, Opendoor will provide an offer price sight unseen after gathering information about the home from the customer. Against the offer price, the company will charge home sellers a risk fee to hedge against any potential depreciation in home price.

A risk fee can vary based on how risky Opendoor deems the home purchase. On average the fee is about 6.7% of the offer price.

This buying model is attractive to sellers because it allows them to sell their homes immediately.

Opendoor also positions its product as cost saving as well. As detailed in the below graphic comparing direct-buying to traditional home sales, the company claims its process leaves the home seller with a larger total cash take after closing. 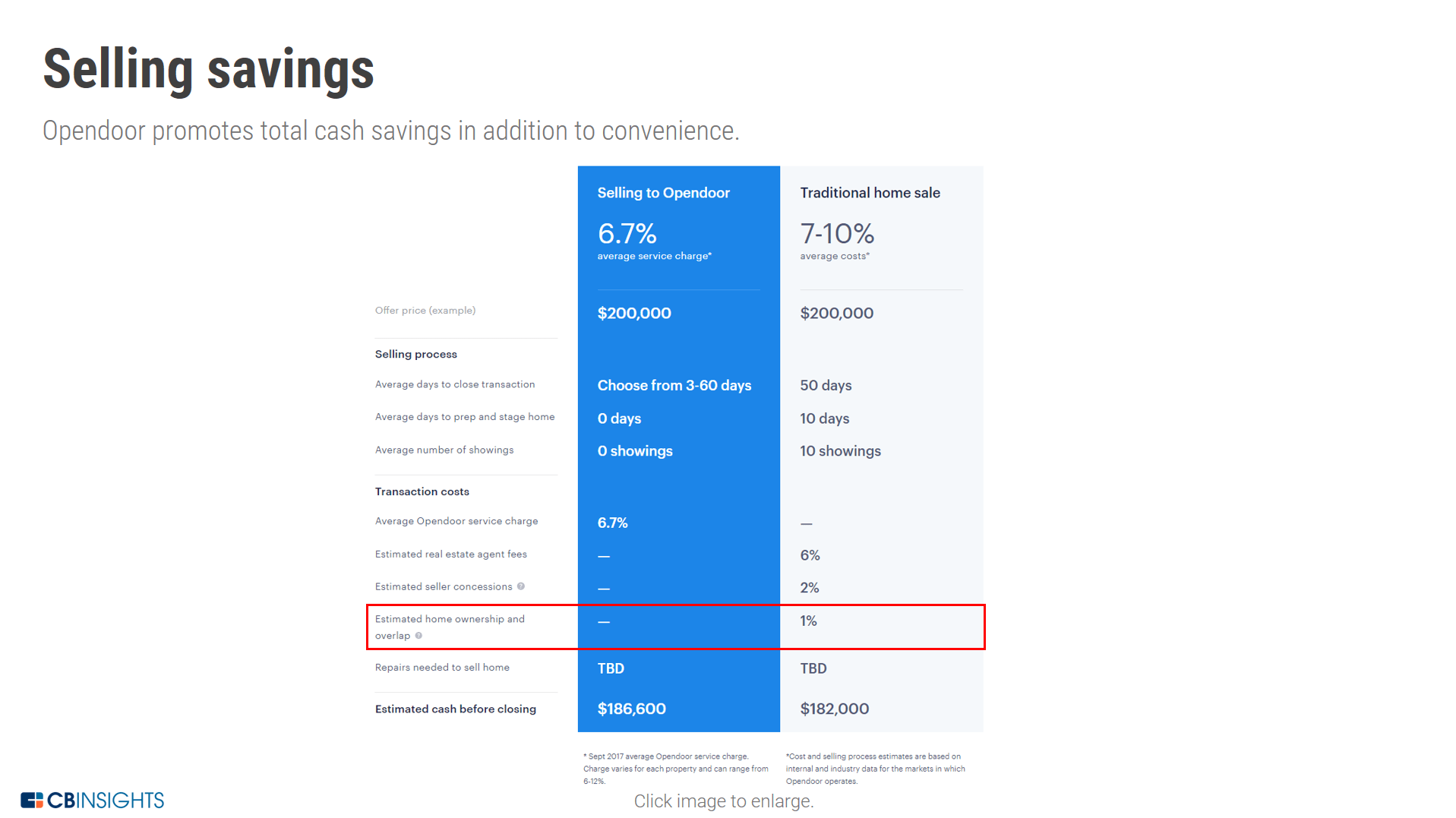 After purchase, Opendoor lightly renovates the home, as needed, and resells the home to other buyers. The company believes that after some light cosmetic renovation, and an appreciation arbitrage, there’s real profit to be made.

Home buyers interested in properties available via OpenDoor can access and view properties at their convenience with key codes and without agents. What’s more, home buyers are provided a 30-day guarantee on their purchase, which stipulates that Opendoor will buy back the home.

Existing and new customers can take advantage of home trade-ins as well, purchasing a home directly from interested home buyers and avoiding the cost of carrying two mortgages at once or making offers contingent on selling a home.

Its largest operations are in Phoenix, Dallas, Las Vegas, and Atlanta. To get a sense of each market we produced the accompanying graphic, toggling between homes that have been sold (or are pending sale in each market) (dark blue) versus listed homes that are currently up for sale (light blue). At a high level it is possible to easily grasp the neighborhoods and areas Opendoor is targeting in each city.

While single-family, townhomes, duplexes, condos, and gated community homes are all accepted, only on-site constructed (non-prefabricated), post-1960, non-age restricted homes, valued between $100K-$500K, that sit on a maximum of a 1 acre plot, are not in flood zones, are not solar leased, and do not have polybutylene plumbing, or Masonite Woodruff roofs are accepted. These restrictions presumably help the accuracy of the company’s valuation models.

Mike Delprete, a real estate tech strategist and researcher, and Sib Mahapatra, a former strategy manager at Redfin, put together an analysis of Opendoor’s business health in 2016, compiling public MLS data from the markets the company operates in. As of November 2016, they estimated the company was doing about 120 sales per month in the Phoenix market.

Fast forward to December of this year, new MLS data shows the company growing substantially. In its two largest markets, Phoenix and Dallas, total home sales have grown by a combined 150%, largely because of the addition of the Dallas market. The Phoenix market grew 55% over the same time period.

Additionally, whereas Opendoor took an average of 20 days to turn a house around and list it on the market again in 2016, this number has reportedly been reduced to 13 days on average in Phoenix and Atlanta. Delprete notes this kind of operational efficiency demonstrates a “transferable competitive advantage between markets. A critical ingredient for national expansion.”

Per a Forbes article in 2016, the company leverages up to 90% of home purchases and as of fall 2017 had raised more than $600M in debt to fund its home buying. The company is now spending $100M monthly on home purchases or $1.3B annually.

While total addressable market predictions are sometimes overly simplistic, Opendoor’s CEO says it currently accounts for an average of 3% of all the home sales in the Phoenix and Dallas markets. Extrapolating from this, if it successfully enters enough markets and captures only 1% of the 5 million real estate transactions that occur annually in the US at an average price point of $250,000, it would potentially earn over $1B in top-line revenue from appreciation and fees.

The company’s business model is undoubtedly quite risky and puts immense pressure on their pricing and valuation models. Thus far it might be why the company has stuck with such a tight price zone. Nobel Prize-winning economist Robert Shiller told Forbes that the biggest question is if their model can “price accurately” where there is “information asymmetry” — namely that the homeowner knows more than Opendoor, especially on anecdotal issues like the quality of the local schools, neighbors, etc.

There is also the added “what-if” scenario should the housing market suffer a downturn. The company has said it could navigate such a downturn by increasing the risk fee the company charges. If Opendoor is unable to liquidate their home holdings it has also said it might also be able to rent their stock, however this heavily depends on the debt agreements it has in place.

Eric Wu, Opendoor’s CEO has dismissed concerns around a housing downturn and said that in predictive models, a downturn scenario replicating the 2008 crisis, Opendoor’s “value proposition is even stronger,” providing customers who need to sell a viable option.

SAN ANTONIO AND CHARLOTTE ARE NEXT

We looked at the company’s hiring data to see if we could draw any strategic insights into where the company might be expanding.

Based on the data, the company looks to be hiring in San Antonio, TX, and Charlotte, NC, two markets the company has not yet publicly said it is operating in. Housing stock in these cities falls in line with Opendoor’s other areas of operation, with lower average home values than in cities like New York, Los Angeles, or San Francisco. 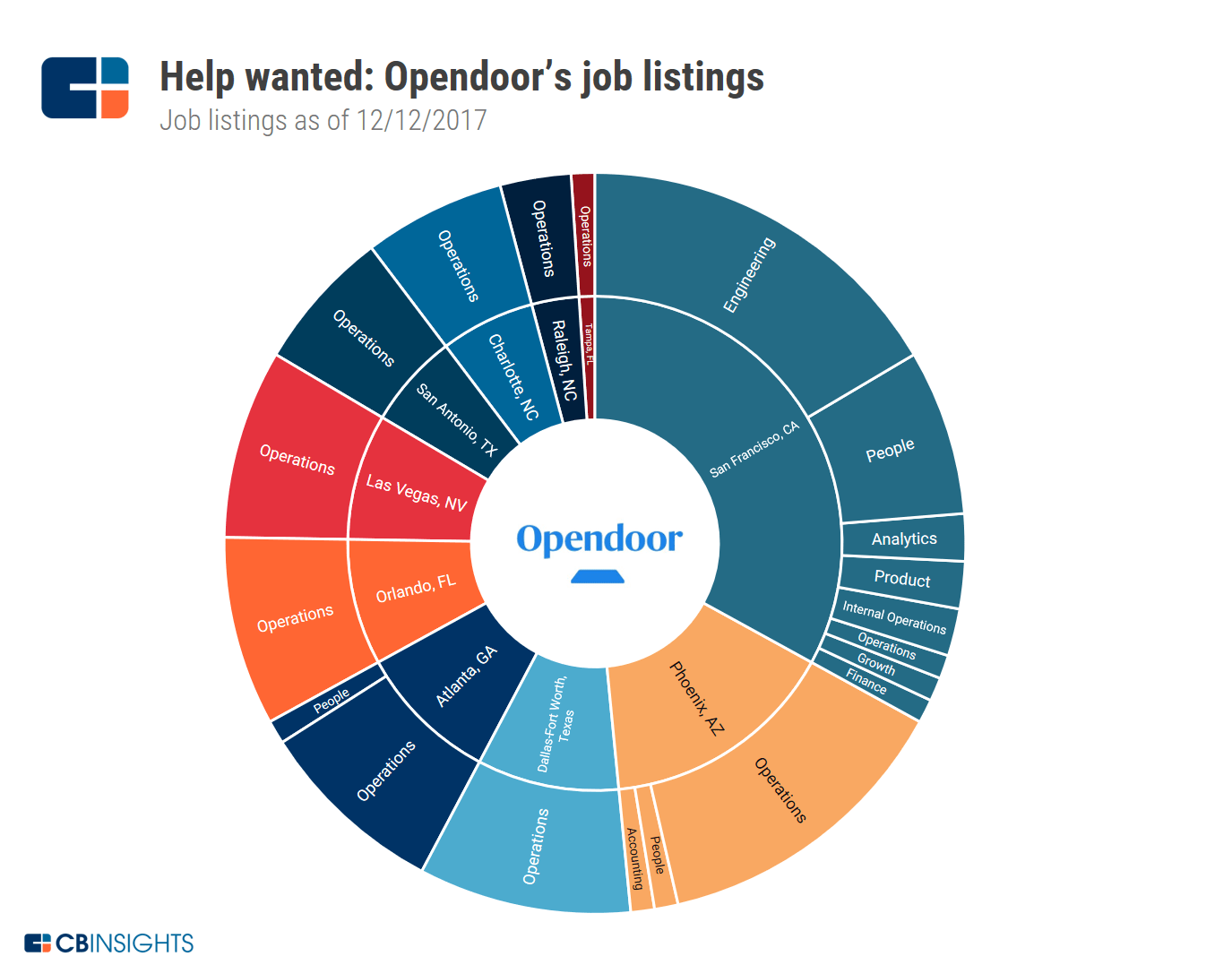 Veteran tech entrepreneur and PayPal executive Keith Rabois co-founded OpenDoor and now serves as the company’s Executive Chairman. Rabois convinced Eric Wu to turn his attention to the concept full time, after founding Movity.com and selling to Trulia.com. Rabois and Wu co-founded the company with Ian Wong, an alumnus of Square, and JD Ross, formerly a product and growth executive at Addepar. 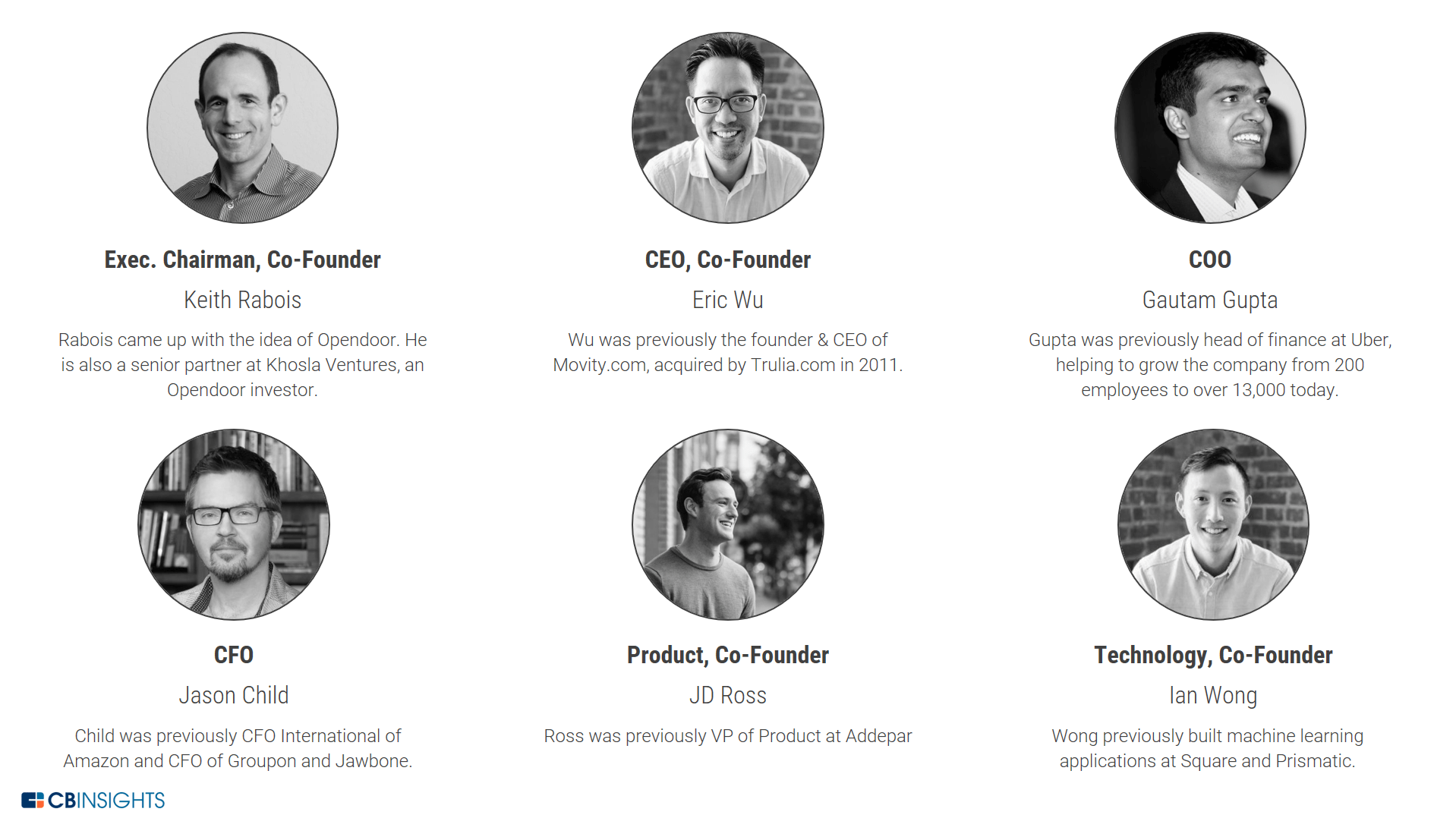 Opendoor added Gautam Gupta and Jason Child in COO and CFO roles respectively. Both have experience growing and leading companies financially, with work histories at Uber and Amazon.

Apart from serving as its Executive Chairman, Keith Rabois is a senior partner at Khosla Ventures, an early investor in the company.

Rabois has worked in senior roles at Square, LinkedIn, and PayPal, as mentioned above. And, as is visible in the accompanying investor graphic, there are a host of early/founding PayPal employees, colloquially referred to as the PayPal Mafia, who are among the angel investors investing in Opendoor. 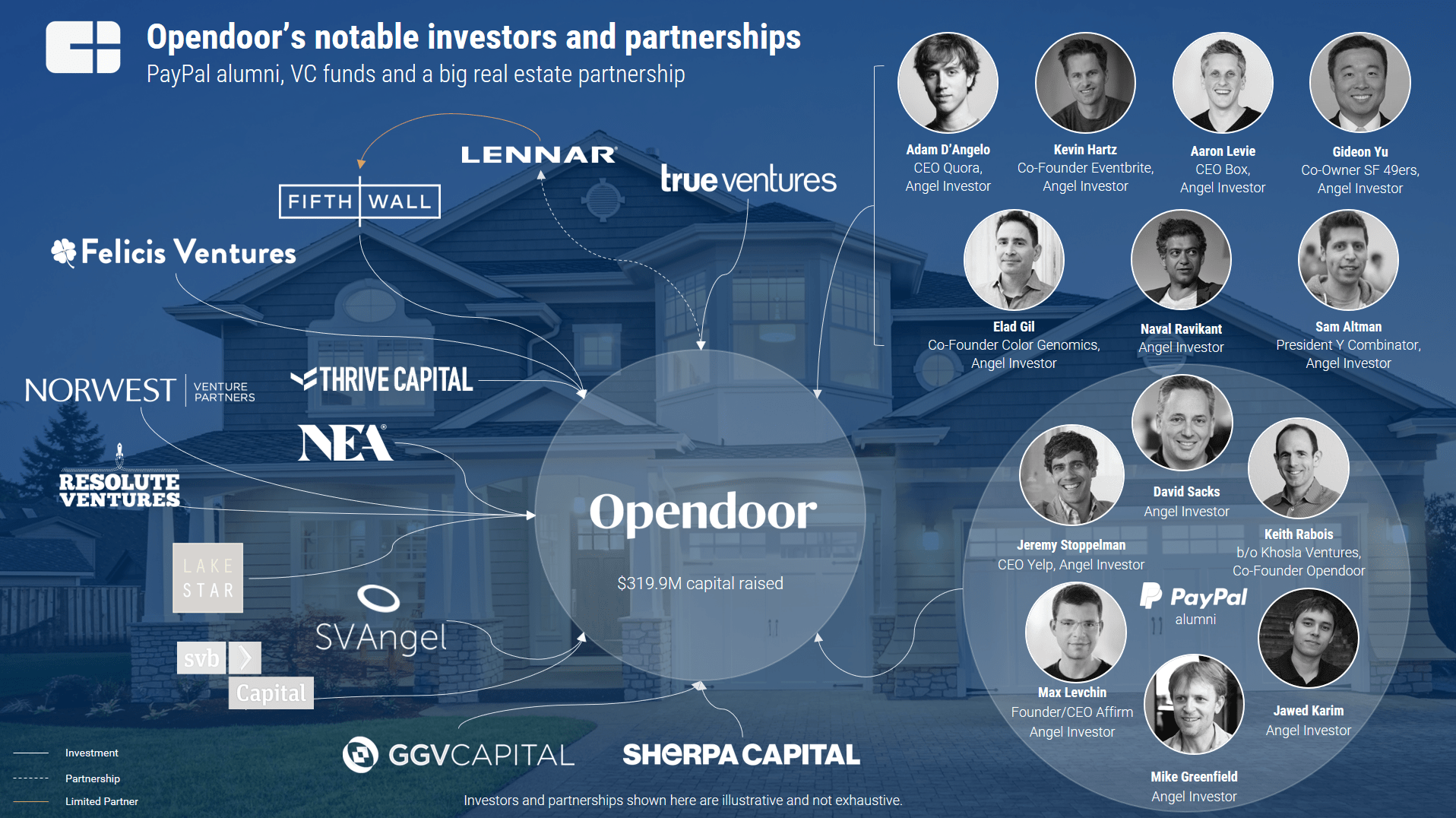 Real estate-focused venture investor Fifth Wall Ventures is also an investor in Opendoor, participating in the company’s $210M Series D. Fifth Wall raised a $212M fund this year from strategic real estate LPs including CBRE, Equity Residential, Hines, Prologis, and Lennar, among others. In 2016, Lennar was the second-largest home construction company in the US.

Lennar and Opendoor formed a partnership announced in Q3’16, in which homeowners in Las Vegas can sell their current home to Opendoor and purchase a home in a Lennar Las Vegas community. The program is described similarly to trade-in/trade-up programs that exist for auto-purchases. Additionally, Opendoor recently disclosed that Jon Jaffee, Lennar’s COO, would join Opendoor’s board of directors.