This report takes a data-driven look at global insurance tech trends with a focus on the future of distribution and delivery.

In Q2’21, we witnessed the largest quarter-on-quarter funding increase since Q3’18. Specifically, global insurtech funding ballooned to over $4.8B, representing a 89% increase from Q1’21 and a 210% increase compared to the same period last year.

Though there was an 11% uptick in deal activity, the funding surge was largely driven by mega-rounds ($100M+ fundings). Collectively, the 15 mega-rounds garnered nearly $3.3B — 67% of total funding — as late-stage players like Wefox and Bought By Many sought expansion. 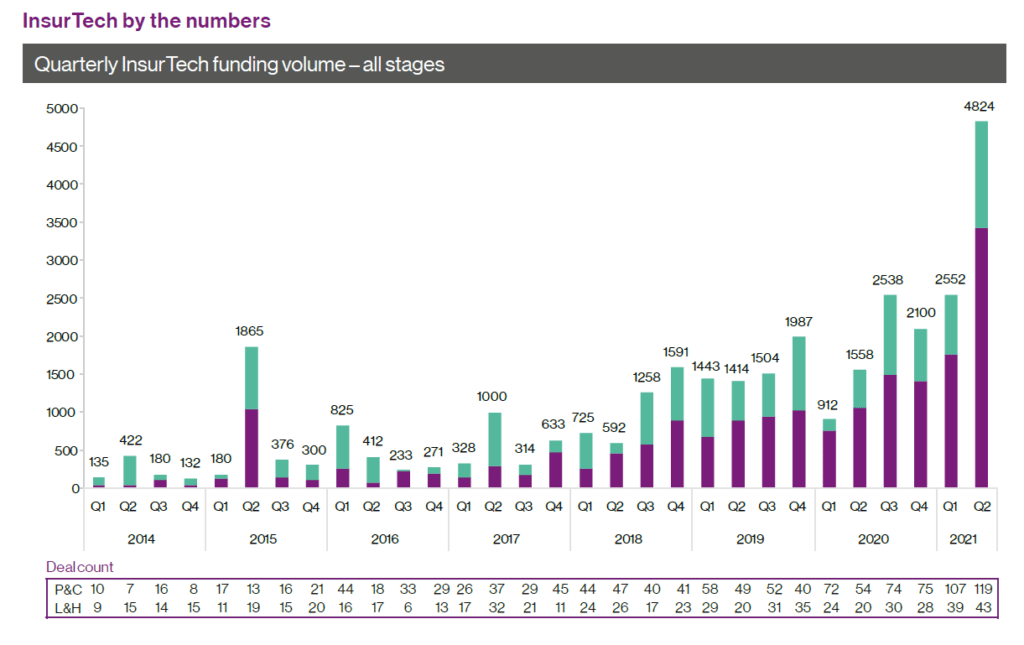 Willis Towers Watson’s Insurance Consulting and Technology provides a powerful combination of advisory services for insurance companies, integrated with leading-edge technology solutions and software that is underpinned by unparalleled analytical capabilities. We combine our deep insurance domain expertise with our technology capabilities to support clients with risk and capital management, strategy and growth, technology, and operational effectiveness and profitability.

Willis Re is one of the world’s leading reinsurance advisors. Over our 180-year history, we have developed a deep insight into all aspects of the global insurance industry. In particular, we understand how individual insurance companies develop and drive their own unique strategies to achieve their goals. We offer you comprehensive service backed by stable, well-trained staff to help you reach and exceed your specific targets in the most cost-effective fashion. We have a deep understanding of risk – and all the ways it affects capital and your organization’s financial performance. Our core focus is to provide you with a superior understanding of the risks you face, and then advise you on the best ways to manage extreme outcomes.