Research Brief
4158
VC-backed deals have dropped from 86 in 2012 to 35 in 2016. Investment and asset management firms are slowly stepping in to fill the gap.

When Solyndra failed in 2011, after raising more than a billion dollars in funding, it shook investors’ confidence in the solar space. Following Solyndra’s collapse, Abound Solar and Nanosolar — both developing solar cell technologies — closed shop between 2011 and 2013. The impact of this can be seen in the drop in funding to startups in the solar category, from over 30 in 2012 to less than 15 in 2016. 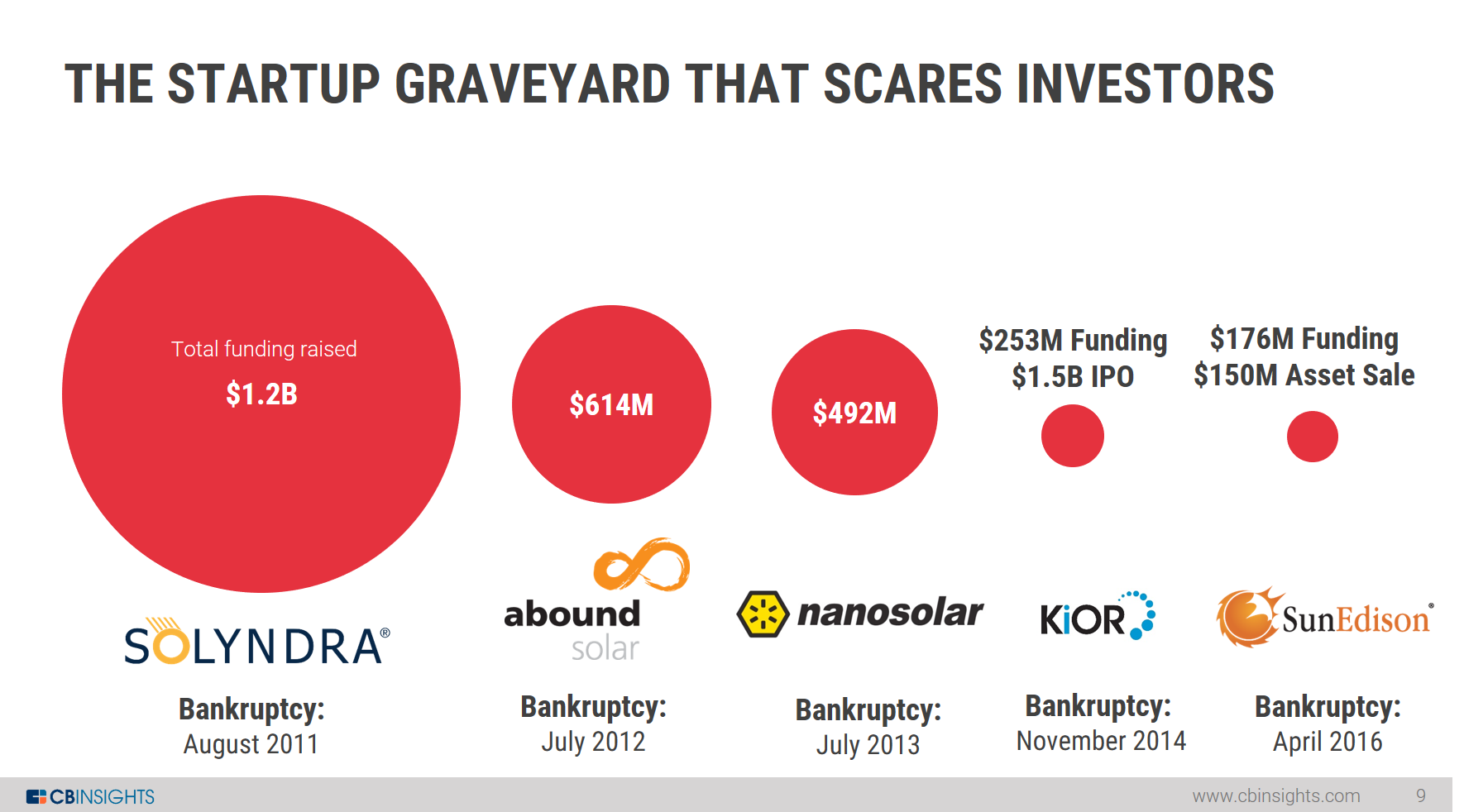 The image above shows some of the prominent startup failures. KiOR, which was a biomass startup and a joint venture between Khosla ventures and EconBIO, had an IPO valuation of nearly $1.5B in 2011. It filed for bankruptcy just a few years later, in 2014. In 2016, SunEdison, another well known player in the space, filed for bankruptcy.

Apart from the companies mentioned above, around 15 startups filed for bankruptcy between 2011 and 2016. The list includes solar tracking startup QBotix, which closed after raising $25M from prominent investors like Draper Nexus Ventures and New Enterprise Associates.

Deals backed by corporations, including investments by CVCs, have been fluctuating over the years, but bounced backed to 32 in 2016 from 26 in 2013. Around 13 out of the 23 deals backed by corporations (excluding CVCs) last year were corporate minority rounds. To name a few, Toyota took a minority stake in Anellotech and Mitsubishi invested in community solar startup Nexamp.

On the other hand, asset/investment management firms participated in more deals in 2016 than in the previous 3 years: 16 deals, mostly in solar, which accounted for 9% of the total deal share in 2016. Switzerland-based Partners Group backed Tennessee-based Silicon Ranch in a $100M round in Q2’16.

The map below includes the number of deals backed by the top 4 types of investors in renewables (excluding individuals and angel groups). 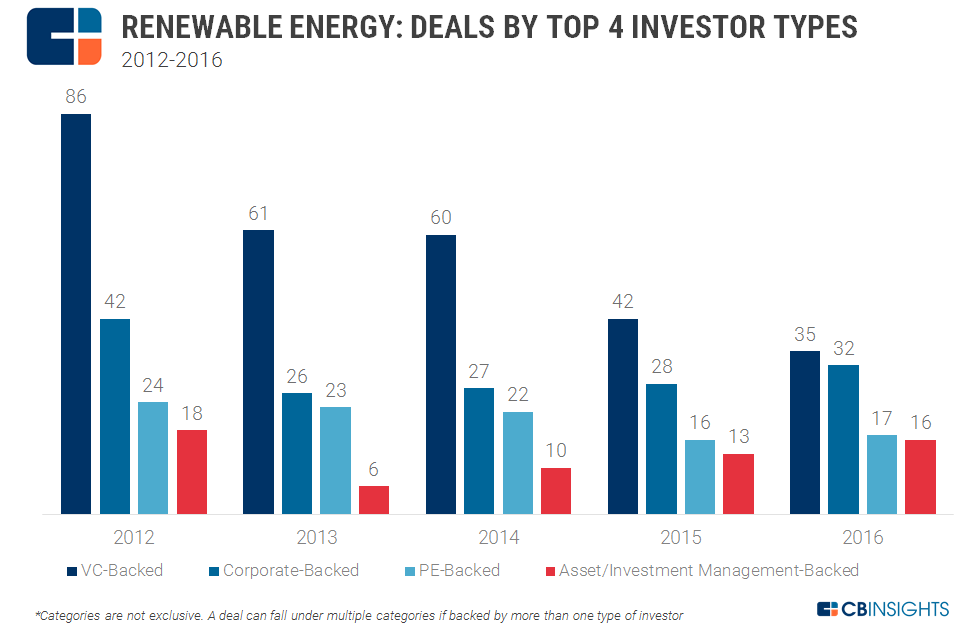 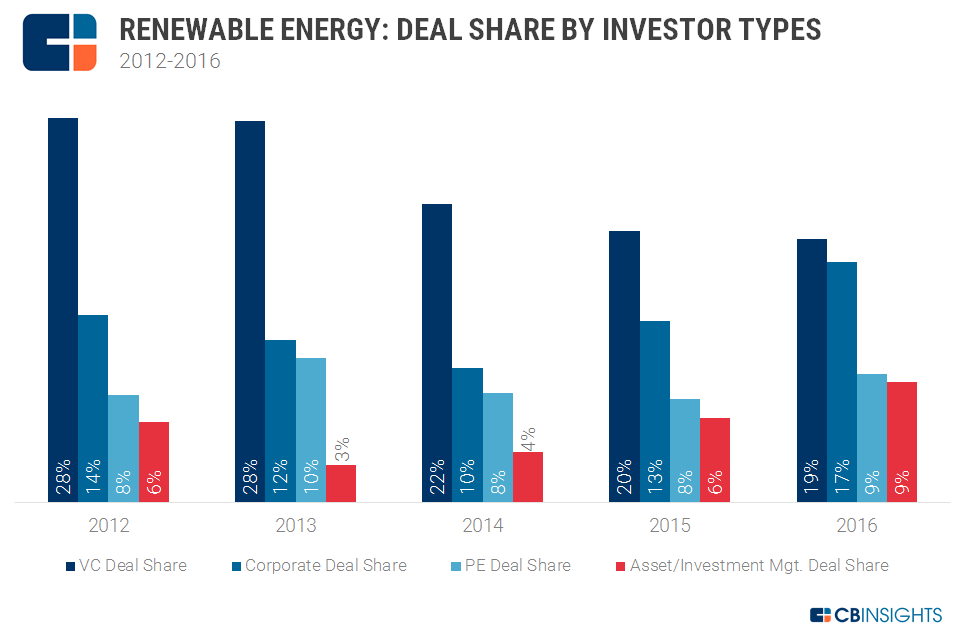 The list below ranks the top investors in renewable energy startups since 2012, based on unique companies invested in. The heat map shows their deal activity in this sector during this time period. Although there were a few recent deals (GE Ventures participated in 2 deals in 2016 to energy storage company Sonnen, and Kleiner Perkins Caufield and Byers backed startups like Renmatix and BeamReach Solar recently), most of the activity was in 2012 and 2013, with investors pulling back in recent years.

Kleiner Perkins Caufield and Byers ranked first, having backed 12 unique companies in 5 years. But most of its activity was in 2012, with deal activity dropping from more than 12 to just 1 last year. New Enterprise Associates, which backed 8 unique companies, has not invested in the space since 2014. 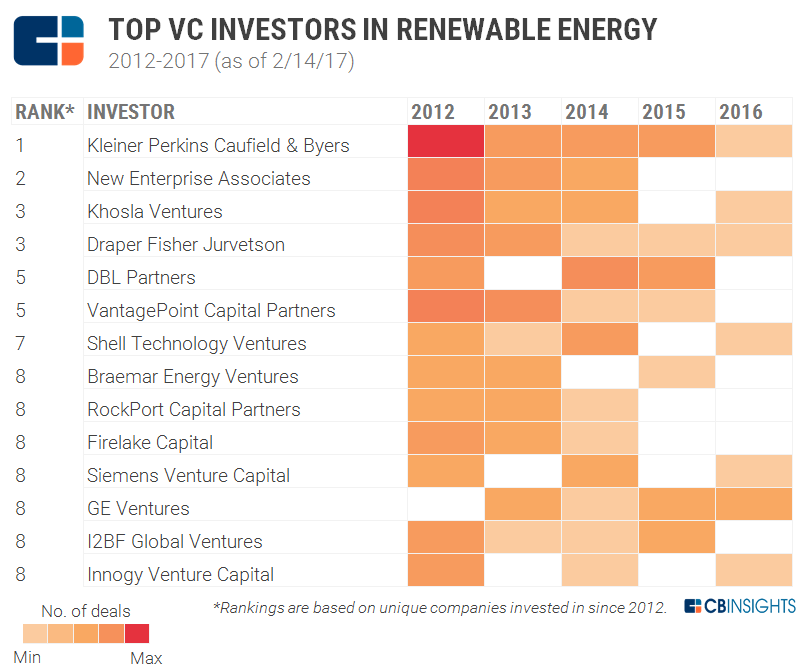