Research Brief
4106
Even as deals slowed, 2017 opened to a $200M round raised by India-based solar and wind energy startup ReNew Power.

Equity deals to private renewable energy companies have been fluctuating over the years. Though deals bounced back in Q4’16, the numbers are still below those of 2014 and prior years. Looking at funding by types of renewable, a majority of the deal share has gone to solar startups across the years.

This year opened to a $200M mega-round raised by India-based solar and wind energy company ReNew Power (in the Other/Hybrid category), putting the company’s valuation at $2B. The round was led by Japan-based JERA, a joint venture between Tokyo Electric Power Co and Chubu Electric Power. ReNew Power had previously raised 3 mega-rounds from investors including Goldman Sachs and Asia Development Bank.

Despite this large round, though, so far in 2017 through 02/14 there have been only 10 deals total to renewable energy startups, putting the quarter on pace for a decline compared to Q4’16.

Using the CB Insights database, we looked at quarterly deals and dollars since 2012 and how funding was distributed by type of renewable energy company.

Although big corporations like Toyota and GM have focused their R&D efforts on fuel cell technologies, private market activity in this area has been minimal. Fuel cell startups raised just over 50 deals since 2015, with no deals in the last 2 quarters.

Deals to bio-energy startups, which was second only to solar deals in 2012, have been fluctuating over the years, hitting a 5-year-low of 17 in 2016. However, in Q3’16, Pennsylvania-based late-stage bio-energy startup Renmatix raised a $31M Series D round from investors including Kleiner Perkins Caufield & Byers, Bill Gates, and BASF Venture Capital. The startup focuses on 2nd generation biofuels, among other industrial applications of biomass.

Startups in energy storage, with a focus on renewable energy, raised 12 deals in 2016, a record for the category. Sonnen raised an $85M Series D in a Q4’16 round from investors including INVEN Capital, GE Ventures, and Envision Energy. Sunverge Energy raised a $36.5M Series C from investors like Siemens Venture Capital and Softbank China Venture Capital. Aquion Energy, which is developing salt water batteries, raised $33M in a Series F round. You can read more about grid energy storage startups here.

Our analysis includes residential, commercial, and utility-scale renewable projects, as well as renewable-powered consumer products. It includes only equity deals and convertible notes, and excludes debt. 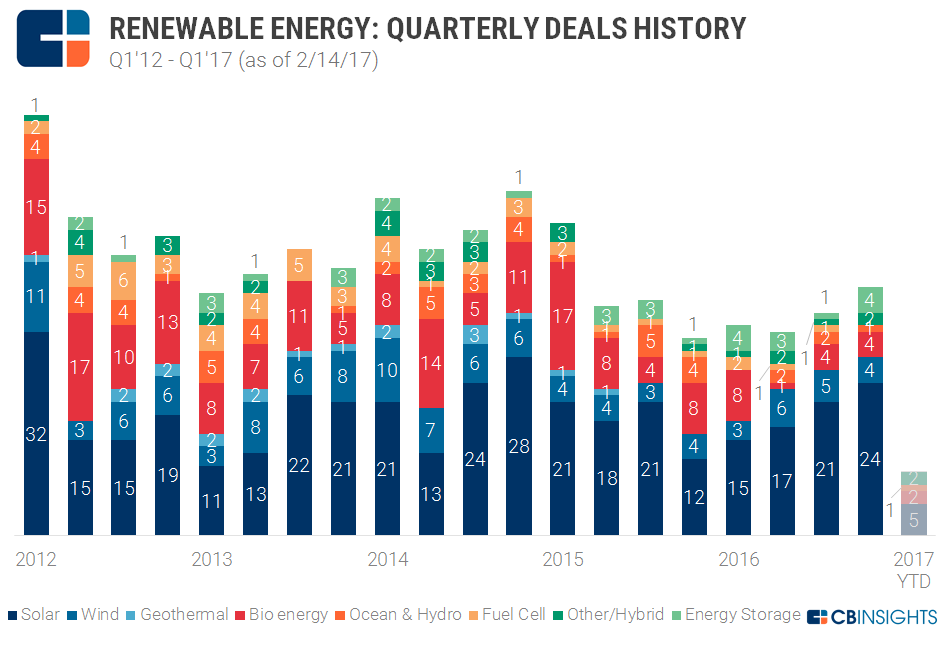 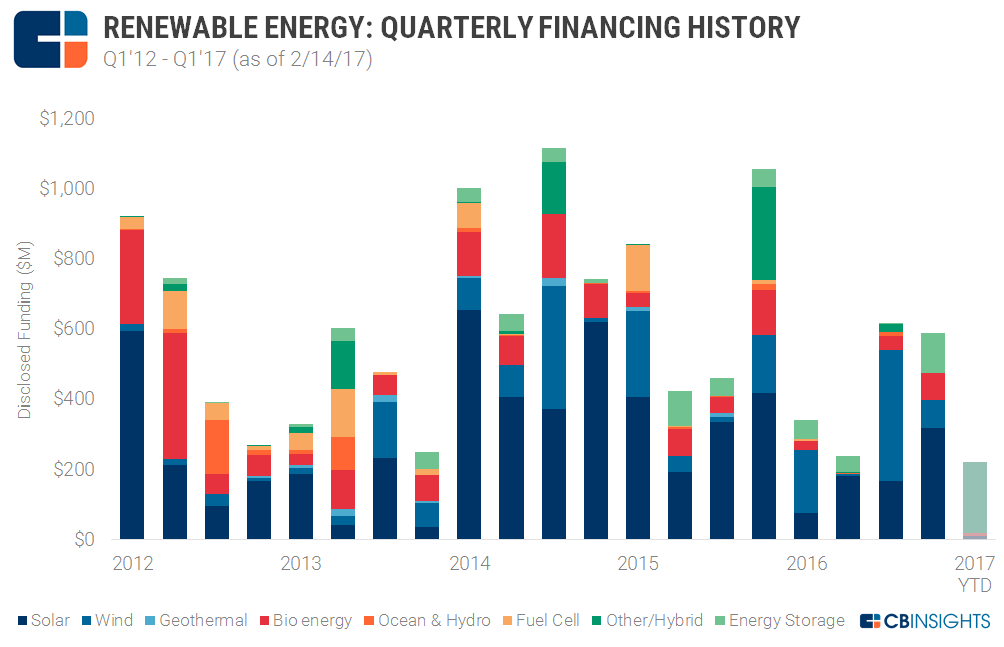