Research Brief
1322
Kleiner Perkins-backed Remind has quickly climbed in the app store, surging to the top 15 overall free apps in the entire App Store, alongside familiar names like Spotify, Twitter and WhatsApp.
See the fastest-moving apps and publishers in the iTunes App Store with our free CB Insights Mobile Momentum newsletter.

The new schoolyear is right around the corner and, based on our mobile app data, a new messaging app that lets students stay in touch with teachers is getting good grades.

At the beginning of August, one of our mobile app alert algorithms tracked a massive jump in the App Store rankings by Remind, an app that bills itself as “a free, safe and easy-to-use way to instantly text students and parents.”

As of Aug. 14th, Remind stood in the top 15 overall free apps in the entire App Store, alongside familiar names like Spotify, Twitter and WhatsApp. The app’s surge in the overall App Store ranks has been swift and quick in August as the orange line below highlights. At the same time, the app has also climbed to the top of the ‘Education’ category.

Remind, formerly known as Remind101, is backed by prominent investors including Kleiner Perkins Caufield & Byers, The Social+Capital Partnership and First Round Capital. Of note, Remind raised a $15M Series B led by Kleiner Perkins’ John Doerr just a little over four months after it raised a $3.5M Series A round.

Below is the App Store rank chart for Remind since October 2013 to present. This app ranking data comes directly from CB Insights’ Performance Metrics. These metrics are available to CB Insights subscribers in the Division or greater plans. 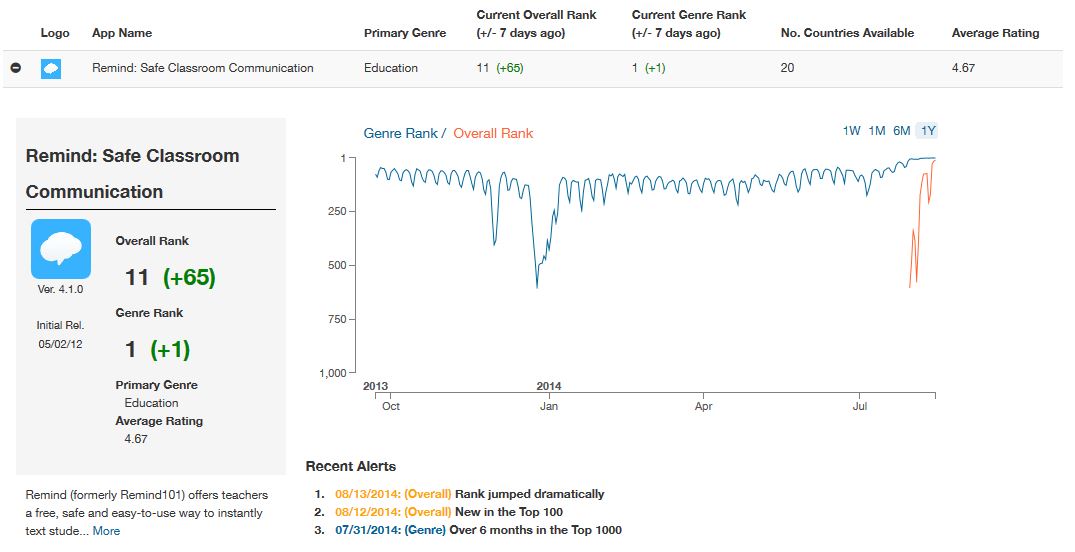 Track deal information based on App Store category and rank in the CB Insights Venture Capital Database. Sign up free below.