US regulatory bodies have conflicting ideas on how to regulate ICOs and tokens, but even the threat of regulations is materially changing the space.

In June, the SEC’s head of corporate finance William Hinman stated that ether, the cryptocurrency associated with the Ethereum network, is not a security.

“Based on my understanding of the present state of ether, the Ethereum network, and its decentralized structure, current offers and sales of Ether are not securities transactions,” Hinman said, “and, as with bitcoin, applying the disclosure regime of the federal securities laws to current transactions in Ether would seem to add little value.”

Hinman argues that ether and bitcoin are not securities because the networks in which they function are decentralized; no central parties dictate the continued maintenance of the network or sale of associated tokens. But hundreds of other “centralized” coins should be classified as securities, according to Hinman.

Other regulatory agencies like the CFTC and FinCEN are approaching the sector in different ways. Below, we take a look at how US regulatory bodies are thinking about ICOs and crypto assets, and how companies in the space are responding.

The SEC wants to regulate most tokens like securities

According to the SEC (Securities and Exchange Commission), most cryptoassets and tokens — excluding ether and bitcoin — are securities.

In November 2017, SEC Chairman Jay Clayton said: “I have yet to see an ICO that doesn’t have a sufficient number of hallmarks of a security.” Three months later, in February, Clayton said before Congress: “I want to go back to separating ICOs and cryptocurrencies. ICOs that are securities offerings, we should regulate them like we regulate securities offerings. End of story.” At around the same time, the SEC subpoenaed a number of cryptocurrency hedge funds and organizations that held ICOs.

From its rhetoric and activity, it appears that the SEC is ready to treat ICOs as securities. This doesn’t bode well for teams that held ICOs, or their legal advisors, as these companies could now face legal repercussions. 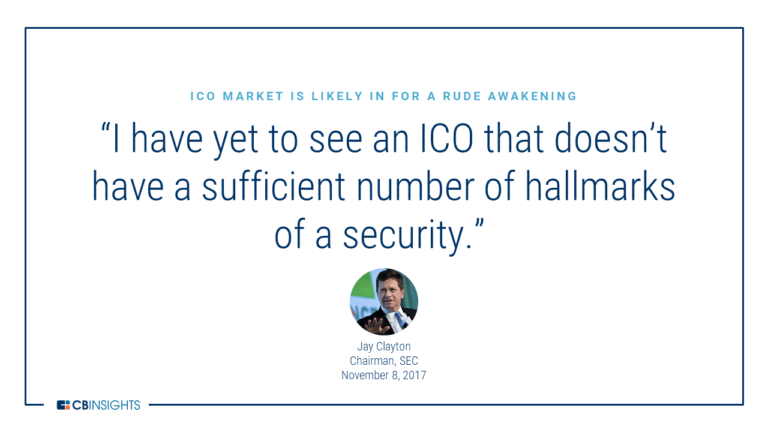 FinCEN, the Financial Crimes Enforcement Network, takes a different view. The body sent a letter to Senator Ron Wyden (who sits on the Senate Committee on Finance) in March, writing that “a developer that sells convertible virtual currency, including in the form of ICO coins or tokens, in exchange for another type of value that substitutes for currency is a money transmitter and must comply with AML/CFT requirements that apply to this type of [money services business].” (AML/CFT requirements relate to the prevention of money laundering or funding illicit activities like terrorism.)

Such an opinion — of cryptocurrencies as money — contrasts with the Commodities Futures Trading Commission (CFTC).

The CFTC believes cryptocurrencies are commodities. In October 2017, the regulator published a primer stating that bitcoin and other virtual currencies are classified as commodities, and therefore are under its jurisdiction when trading derivatives or futures products on the assets. In March of this year, a federal judge ruled that bitcoin is indeed a commodity.

Regulation is reducing the number of new ICOs, but more established companies are entering the space

Above all, these three different definitions highlight regulatory disagreement and confusion.

Crypto policy organizations (like Coin Center) have been quick to offer educational resources around blockchain technology to legislators and regulators to help them understand the space and put appropriate guard rails in place. Prominent VCs Andreessen Horowitz and Union Square Ventures even privately proposed a token sale “safe harbor” to the SEC.

On the flip side, even the stirrings of regulatory oversight are leading to some key sector shifts. As highlighted above, the SEC’s apparent distinction between which cryptoassets are currencies and which are securities is contributing to two developments.

First, the SEC’s increased regulatory scrutiny has led many crypto companies to take a more cautious approach to financing. Legitimate crypto companies are moving back toward venture funding and avoiding pure-play ICOs, while others are pursuing ICOs but making sure their token launches are compliant.

Other attempts at self-regulation are found in SEC filings; companies are filing them more often. In one analysis, 12 “crypto” and “blockchain” related companies filed documentation with the SEC in 2017, and 23 had already filed by May 2018.

A second effect of the SEC’s stance — and broader regulatory clarity — is that it has emboldened some established companies to make first moves in the sector. Square’s Cash app now allows users to trade bitcoin, while Robinhood offers trading for a number of cryptoassets. In early May, Goldman Sachs announced that it’s opening a bitcoin trading operation.

Ultimately, regulation appears to be a bust for unregulated public ICOs, and a boon for most others. Expect regulators to crack down with increasing regularity on ICOs, with both fines and indictments. At the same time, industry attempts at self-regulation are encouraging. Expect industry actors and regulatory agencies to converge on better-defined legislation and regulation.