Deals to regtech startups have progressively risen over the last 5 years and hit a new high in 2016 with 99 deals (as of 12/31/16). Startups in this space are using technology to simplify and streamline compliance, risk management, reporting, data management, and more.

Corporate investors, including corporate parents and corporate venture capital (CVC) groups, have been actively participating in deals to regtech companies, with 2 corporates on the most list of most active regtech investors. Corporate investors also participated in some of the top deals to the category, including a $51M Series E investment in Q3’16 to Druva that included NTT Finance and a $60M Series F investment in Q3’14 to MetricStream that included Kaiser Permanente Ventures.

Using CB Insights data, we analyzed corporate and CVC participation in deals between 2012 to 2016 in private regtech companies. Regulation technology applies to companies across industries including financial services, healthcare, supply chain and product, cannabis, construction, and even cybersecurity.

Corporate involvement took off in 2014 with deals increasing by 143% and funding by 284%. Corporate participation in deals and funding slipped in 2015, however, while still easily surpassing 2012 and 2013’s combined totals.

Top corporate-backed regtech deals of 2016 include a $51M Series E investment to Druva, mentioned above, a $50M Series F to LogRhythm that included Siemens Venture Capital, and a $30.5M Series C to RiskIQ that included MassMutual Ventures. 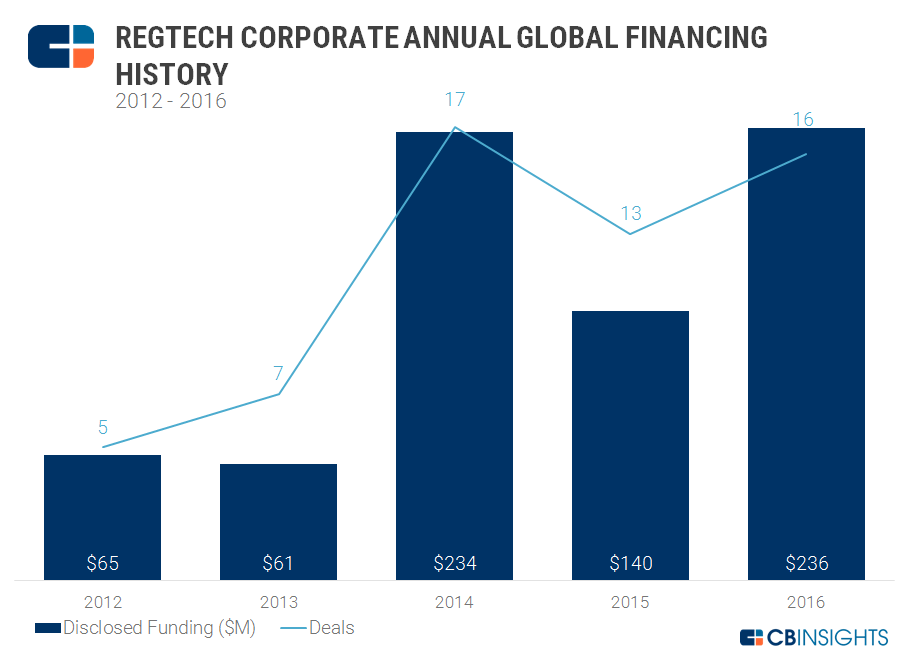 The surge in 2014 was driven largely by Q3’14 activity. Q3’14 saw $121M raised across a record of 8 deals. Participation in deals started to decline in Q2’15 and consistently declined through the end of Q4’15, resulting in an overall decline in deal participation for the year. Deal participation started to recover in Q1’16 and ended the year trending upward. 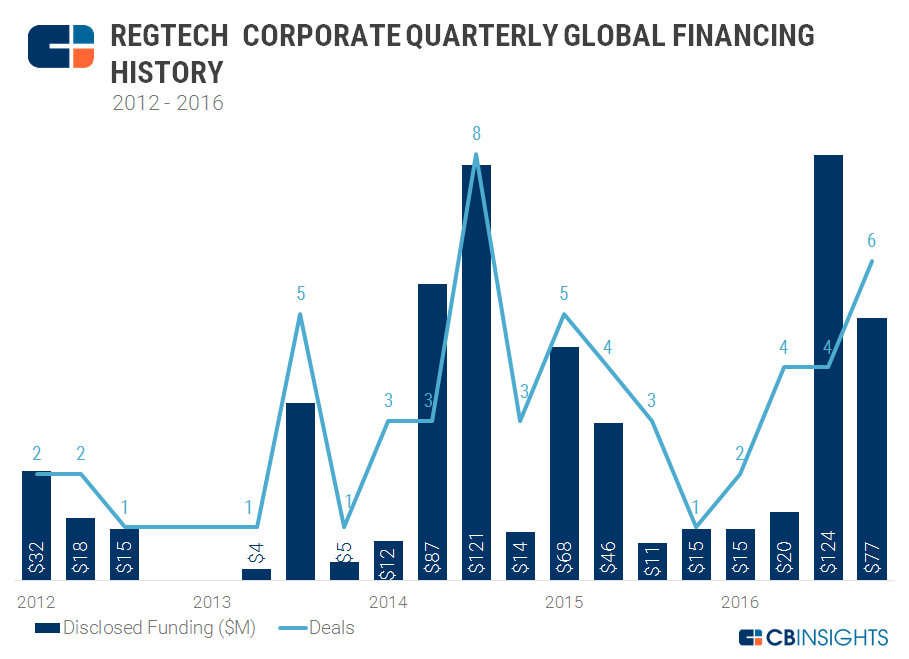 In 2016, the distribution between deal stages was near evenly spread out. Early-stage deals (seed/angel and Series A) accounted for 25% of corporate-backed deal share, mid-stage deals (Series B and C) also made up 25%, late-stage deals (Series D and E) made up 38%, and the remaining 13% went to our “Other” category, which includes minority investments by corporates and convertible notes.

As annual corporate participation in deals increased, the distribution started shifting away from early-stage deals to mid-stage and late-stage deals. In 2013, there were 7 deals total and these were entirely early-stage and mid-stage deals. In 2014 when deals surged, corporates made their first later-stage investments, the largest of which was a $60M Series F investment to risk management software provider MetricStream mentioned above. 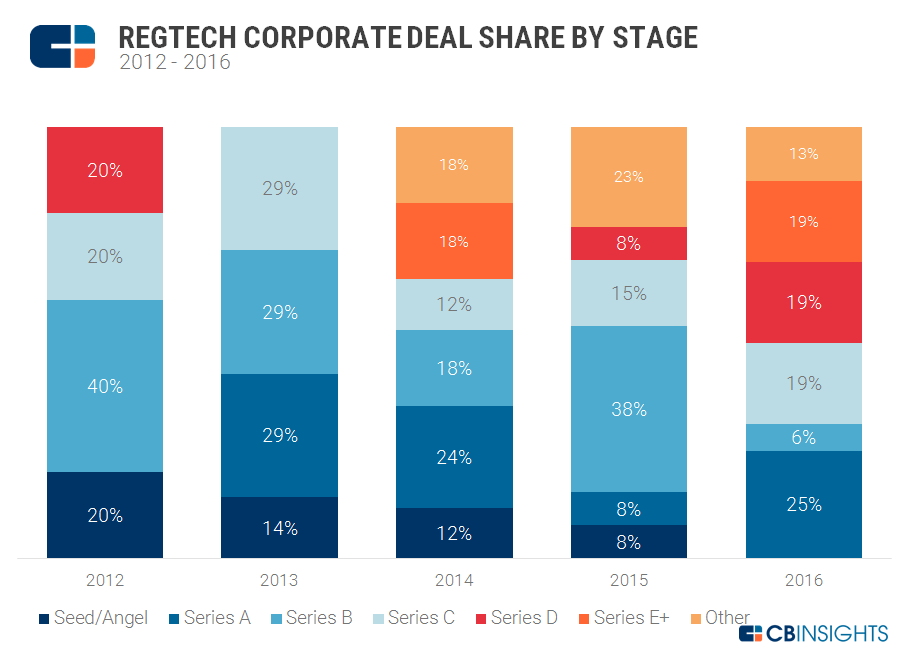 Salesforce Ventures is the most active corporate investor and has participated in deals to more than 5 unique regtech companies. Salesforce Ventures’ top investments include participating in a $40M Series C investment to Skyhigh Networks, a cloud security company that monitors compliance and governance requirements, a $10M Series A investment to nCino, a cloud-based portfolio risk management software for the financial services industry, and a $4.6M Series A to RedOwl Analytics, an information security software company.

The next biggest corporate investor in regtech startups is the CIA’s strategic fund In-Q-Tel. In-Q-Tel’s top investments include participating in a $40M Series F investment to Veracode and a $12.5M Series C investment to HyTrust.

Each of the top 5 investors made investments to at least 2 unique regtech companies.