Research Brief
3088
Despite experiencing record funding levels, its worth noting that Q2'16 real estate tech had the lowest deal count since Q4'14.

In the first half of 2016, real estate tech startups raised more than $1.8B across more than 100 deals. The funding total for the first six months of this year represents an 85% increase when compared to the same period in 2015. Q2’16 saw a series of $50M+ financings including startups like Homelink and Buildium raising large rounds.

As a reminder, real estate technology encompasses all the software tools and platforms used by different participants in the real estate industry, including brokers, investors, real estate-focused lenders, property owners, and managers, as well as buyers. The category includes online real estate rental and buying guides.

While Q2’16 deal activity slowed (-31%) funding levels reached record levels increasing more than 200% over the previous quarter. Q2’16 had 4 deals contribute to the bulk of funding including the enormous $926M Series B to Homelink, $150M Series D to SMS Assist, $65M growth equity round to Buildium, and $55M Series C to VTS.

Despite experiencing record funding levels, its worth noting that Q2’16 real estate tech had the lowest deal count since Q4’14. 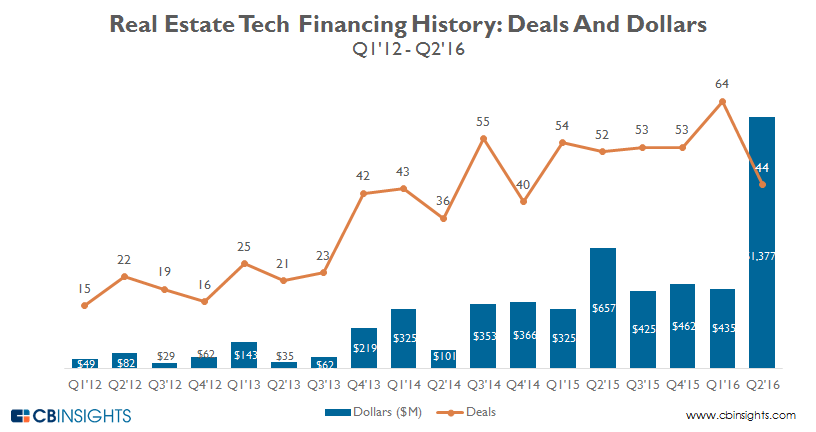 The US still accounts for the majority of deal activity for real estate tech startups.

However, the United Kingdom and India have received an increasing amount of deal activity over the last year. Notable 2016 deals in India include Nestaway Technologies and NoBroker and notable UK 2016 deals include LendInvest and Property Partner.

Germany had some notable deals as well including real estate listing and search companies Lamudi and McMakler raising $31.4M and $9.6M, respectively. 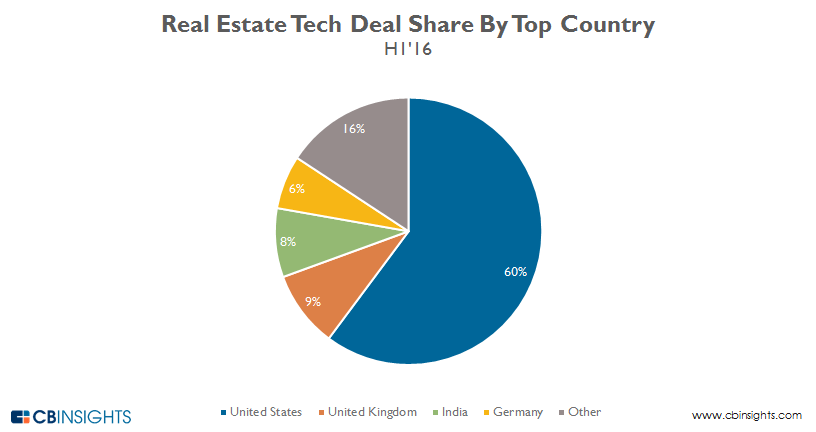 Homelink is by far the most well-funded company on list having raised more funding than the next 3 companies’ total funding combined ($871M).

A number of companies here are based in Asia including PropertyGuru and Aiwujiwu, based in Singapore and China as well as the aforementioned Homelink based in China.

Want more data on real estate tech companies? Login to CB Insights or sign up for free below.