Zoopla's $1.6B IPO and a scattering of other big exits brighten an otherwise gloomy picture for real estate tech exits.

Overall exit activity in venture-backed real estate tech has been slow, despite a spike in activity in 2012 and three IPOs since 2014, including Zoopla’s.

Below is a breakdown of annual and quarterly exits, VCs with the most exits, and the most well-funded companies prior to exiting.

Amid a drought in tech IPOs, real estate tech exits in the 2010 to 2015 period have been led by M&A deals while IPOs account for just 18% of exits. Despite this, the last two years have seen 3 IPOs thus far, which is more IPOs than the previous 4 years combined. The 3 public offerings since 2014 include Zoopla‘s $1.6B IPO, Urbanise‘s $109M IPO, and Appfolio $420M IPO. 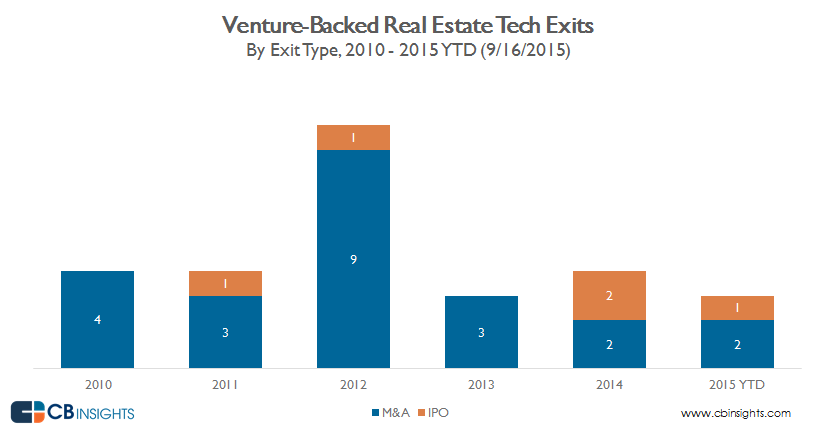 Quarterly exit activity in real estate tech is sporadic as of late: 3 out of the last 5 quarters have seen at least one exit in the form of an IPO, with Q2’14 realizing the second largest amount of exits in the 6-years analyzed below. Since Q1’10, each quarter has seen between 0 and 2 exits, with the exception of highs in Q2’12 and Q2’14 as seen below. 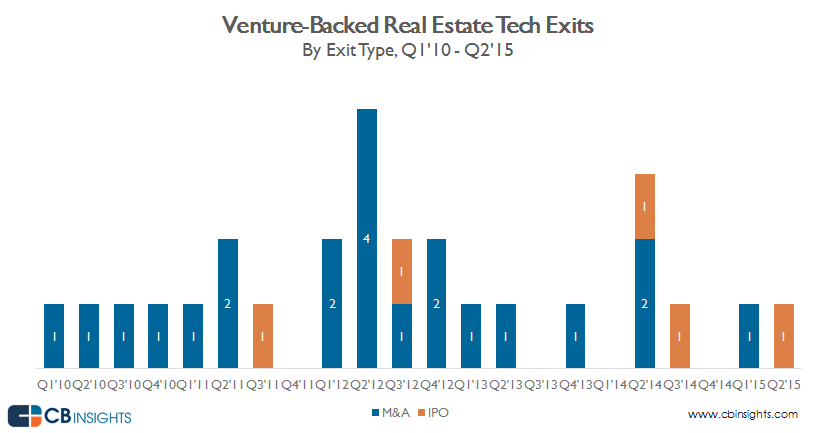 500 Startups was the VC investor with the most real estate tech company exits in their portfolio. The number two spot was a 4-way tie, including smart money VC investor Accel Partners. See the table below for the breakdown.

Most Well-funded Companies Before Exit

The most well-funded companies before exit include Zillow, which raised $81M and China-based Anjuke, the second-ranked company on this list, which raised $60M in total before getting acquired by 58.com.

However, many of these companies received relatively very little funding compared to some of their still-private counterparts.

For example, Fangdd has raised $311M total and PropertyGuru has raised $195M, meaning both have raised more than any exited company on the list below.