Despite its limitations, SMS is the most used feature on today's smartphones. Over 25 years after the first text message, SMS and MMS are finally ready for an upgrade.

Over the last decade, dozens of messaging apps have come to market, with many seeing success — such as WhatsApp‘s $22B acquisition by Facebook, Line‘s $8.8B market cap, or Kik‘s $1B valuation as of 2015.

Even smaller players like GroupMe (acquired by Skype for $85M in 2011) have built successful products in the absence of a universal messaging system.

But in this sea of messaging apps, SMS still reigns supreme.

Despite powerful mobile devices, high-speed wireless internet, and the ubiquity of Wi-Fi, traditional SMS (“short message service”) remains the most widely used feature on smartphones: approximately 97% of smartphone owners use text messaging in a given week, according to Pew Research Center.

However, the next generation of messaging tech is imminent.

Over the next several years, the introduction of rich communication services (RCS) will replace SMS and MMS as the primary messaging system, while offering many of the same features found in today’s most popular messaging apps.

And while consumers will benefit from these advanced messaging features, brands stand to gain the most, as the media-rich capabilities of RCS will allow brands to engage their customers in new and more direct ways.

While we’re still in the early stages of RCS adoption, with only a few key leaders (like Sprint, AT&T, and T-Mobile, discussed below) implementing the technology it requires, RCS is poised to fundamentally change how mobile users engage with each other, brands, and the world around them.

In this explainer, we discuss the history of mobile messaging, the introduction of RCS, what it is, why it matters, and when we can expect to see it widely deployed.

The history of messaging

Despite this accomplishment, it still took another decade for text messaging to become a legitimate commercial success. Until 1999, the UK banned out-of-network messaging, severely limiting consumers’ ability to contact people using other carriers.

And multimedia messaging service (MMS), the companion of SMS that allowed for the messaging of photos and videos, didn’t gain popularity until the widespread adoption of camera phones in the late 2000s.

Today, approximately 8 trillion text messages are sent each year. Though messages today are much larger and more media-rich than messages of the early 21st century, SMS and MMS are still the default messaging systems.

Text messages (SMS) are capped at 160 characters to limit the size of each individual message, while MMS content is often restricted to 1MB. These limitations (and a lack of innovation in the space) contributed to the rise of proprietary mobile messaging platforms like BlackBerry Messenger (BBM) and Google Talk (Gchat) in the mid-2000s. 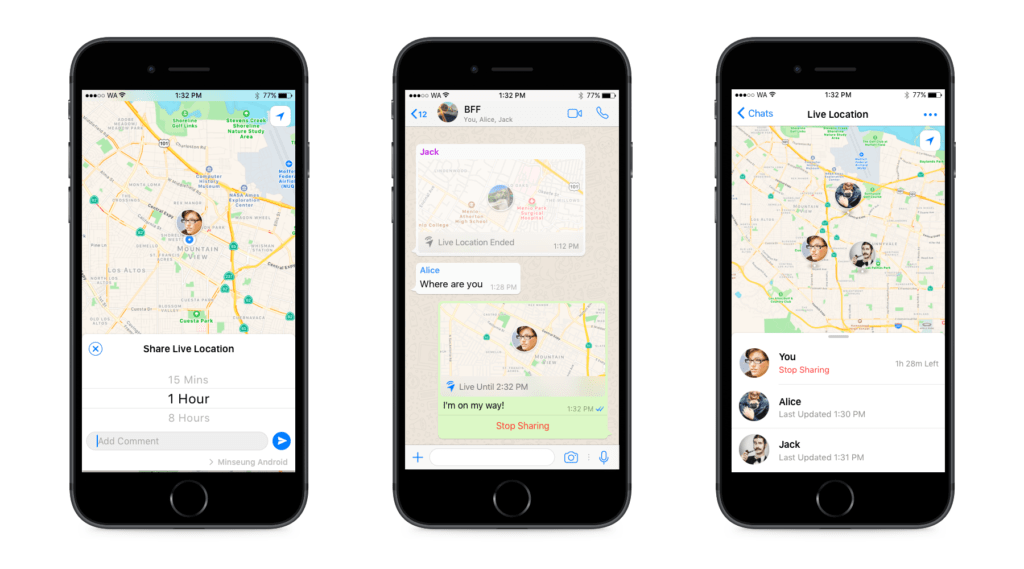 Though these platforms made messaging much more dynamic, the ecosystem became increasingly fragmented. Today, it’s not uncommon for a user to communicate using 5+ mobile messaging applications.

This is precisely why RCS is such a compelling replacement for SMS and MMS: RCS provides an experience similar to that of today’s messaging platforms, without the need for numerous platforms and applications.

Simply, RCS is the next generation of SMS.

More specifically, RCS is a set of next-gen messaging standards that were first established in 2007 by a cohort of telecom professionals. The standards for RCS were adopted by GSMA (the Global System for Mobile Communications Association) in 2008 — 2009 and became the basis for Universal Profile, which was published in 2016.

According to GSMA’s website, “The GSMA’s Universal Profile is a single, industry-agreed set of features and technical enablers developed to simplify the product development and global operator deployment of RCS.”

RCS allows network operators to compete with platforms like WhatsApp, Facebook Messenger, and iMessage, which have gained increasing control of messaging data and revenues. 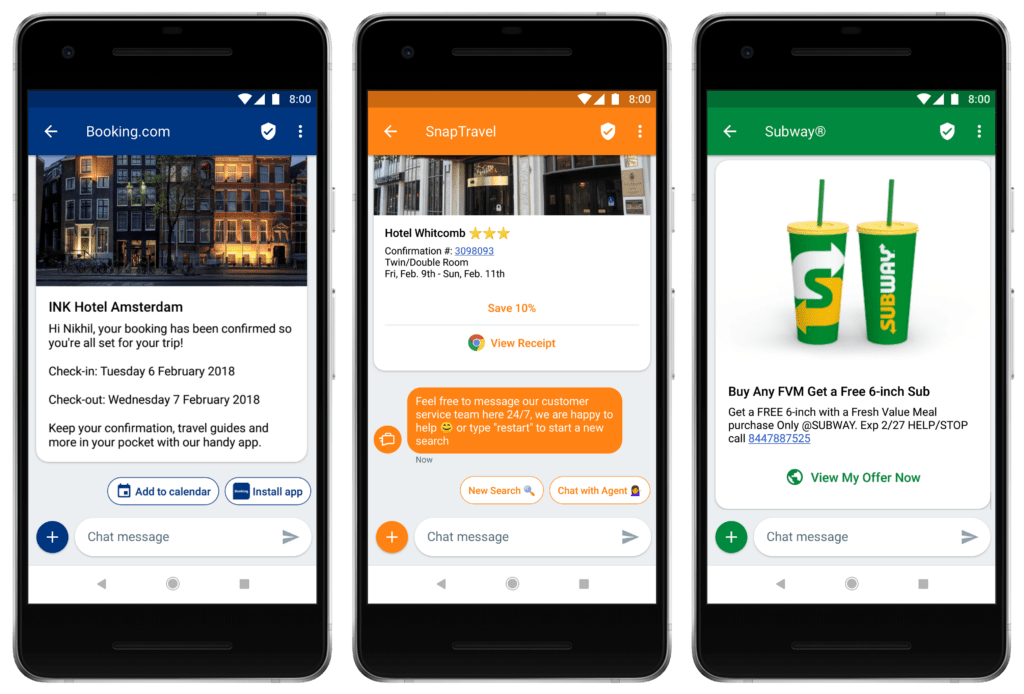 By supporting Universal Profile, wireless network carriers and smartphone manufacturers (OEMs) ensure that they meet the technical standards that support RCS (and incur the costs to do so). The proper implementation of Universal Profile also guarantees RCS interconnection with all supporting networks and devices.

In short, Universal Profile is the blueprint and roadmap for RCS adoption — and the more network operators and OEMs implement Universal Profile, the sooner we’ll have a universal, media-rich SMS replacement.

RCS includes 9 major features that both consumers and brands will be able to utilize. These features will provide consumers with a better messaging experience while also allowing brands to improve customer engagement.

(However, there will be an option to toggle between RCS and SMS/MMS for those looking to avoid additional brand communication.)

Below are the expected features of RCS technology:

How RCS can benefit consumers and brands

If RCS is adopted by all major carriers, OEMs, and operating systems, it will vastly improve the messaging ecosystem, especially between iOS and Android.

But it’s brands that stand to benefit most from the implementation of RCS technology.f

The ability to send high-quality content more directly, receive in-message payments, and better analyze engagement data will give brands a better understanding of their consumers. Moreover, customers will theoretically be more receptive to RCS-based brand communication. According to GSMA, the business RCS messaging market is projected to reach $74B by 2021.

RCS supporters: Where are we now?

Today, the Universal Profile is supported by over 50 wireless network operators, including the big four (AT&T, Verizon, T-Mobile, and Sprint), and more than 10 OEMs including Android manufacturers Huawei, Asus, HTC, LG, and Samsung.

However, while many have expressed “support” for Universal Profile, few of these companies have upgraded their messaging services to implement the technology required for RCS. 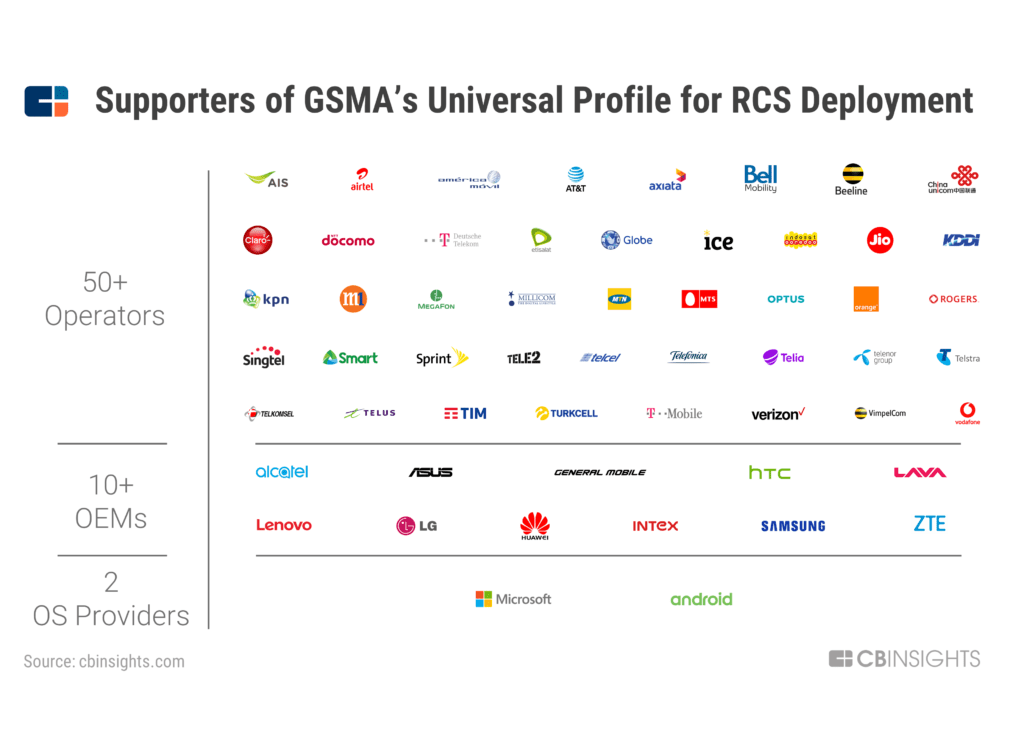 While AT&T and T-Mobile now offer RCS for certain Android phones, communication is limited to other compatible devices within their respective networks — meaning these carriers do not yet support the interconnection standards (between carriers) required by Universal Profile.

To date, Sprint is the only US carrier to fully adopt and meet the standards for Universal Profile. However, its RCS experience is limited by the lack of adoption from the broader industry. 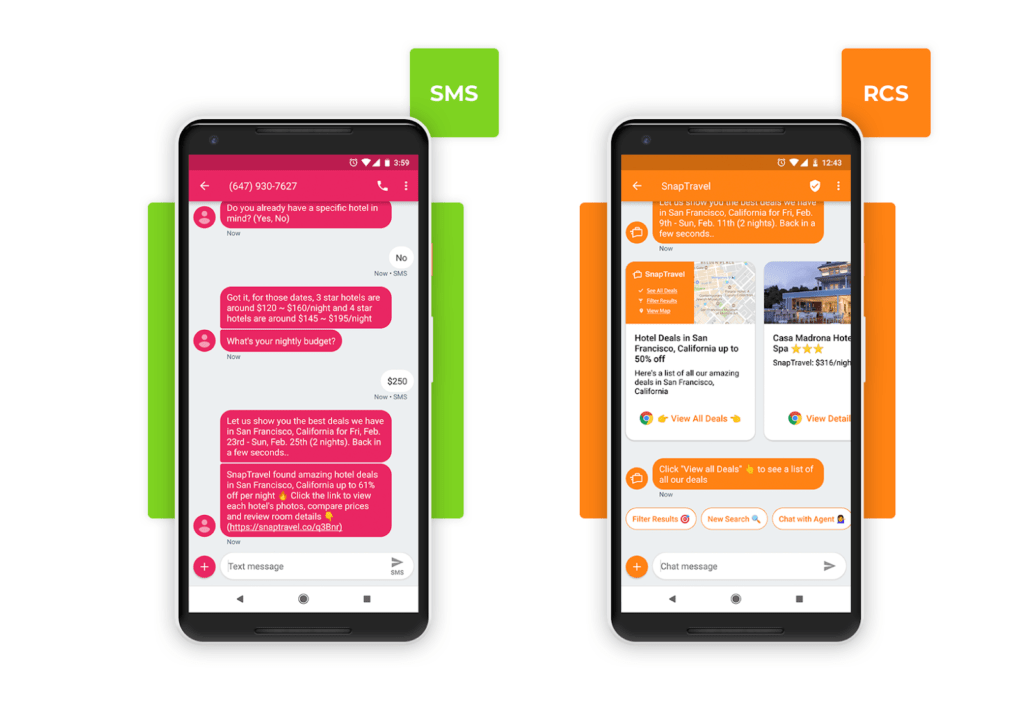 Sprint has worked closely with Google, which is the leading advocate for RCS.

After launching nearly a dozen messaging apps over the last decade, Google hopes that Chat (RCS) will become the universal messaging system to replace SMS and MMS — at least for Android. According to recent sources, the company is even dropping its most recent messaging app, Allo, in favor of its Chat initiative.

Google is so invested in Chat that it now offers a solution to improve the implementation process of Universal Profile for network operators. The company’s Jibe platform offers the necessary tools to launch and manage RCS services across global networks.

More carriers are expected to implement Universal Profile in 2019 (so more Android users can expect Chat around this time). By 2020, GMSA predicts that nearly 86% of smartphones will be RCS-enabled. RCS is also expected to reach the most users in Asia, due to Android’s overwhelming market share in the region.

However, for RCS to become truly universal, every network operator, device manufacturer, and mobile operating system developer will have to implement Universal Profile. While this outcome may be inevitable, it still could take another decade for RCS to fully replace SMS and MMS as the universal default messaging service.

Illustration Sources: WhatsApp, What is RCS?, Features of RCS, RCS for Consumers & Brands