Quantum computing is an increasingly hot area for research and investment, with corporations like IBM, Google, Alibaba, Intel, and Lockheed Martin launching quantum computing projects aimed at bringing the technology — meant to speed up the process of solving complex equations — to commercial viability.

In tandem with company investments, the European Union, US, and Chinese governments, among others, are also backing projects aimed at building commercial quantum computers. In the US, NASA, the NSA, and the Los Alamos National Laboratory are all involved in quantum computing projects. And in August this year, China launched the world’s first quantum satellite in the quest for more secure communications.

However, there are only a  small number of private companies in the industry that have been able to raise over $1M, which suggests that commercial application of quantum computers — for both hardware and software — is nascent at this point, despite the hype. CB Insights data shows that for private quantum computing companies, funding is sparse. The overall ecosystem supporting the development of these companies is still emerging.

To inform our analysis (in Exhibit A), we used the Trends tool on the CBI Platform, which analyzes millions of media articles to understand the rate of adoption of emerging technologies and innovations.

Exhibit A: Quantum computing is emerging — but it’s still niche 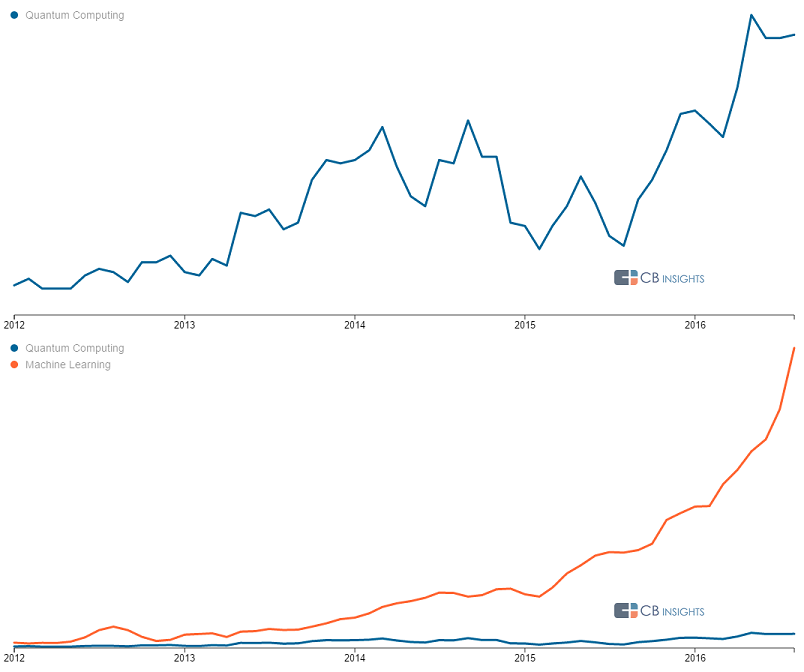 The first graph above for the term “quantum computing” highlights that the technology is an increasingly talked about trend in the media (the upward sloping blue line represents the increase in the number of media mentions beginning in mid-2015). However, when we compare “quantum computing” against a more well-known trend — “machine learning,” in the second graph denoted by the orange line — it’s apparent that “quantum computing” is in fact a young tech trend, which still hasn’t quite emerged from the Discovery Phase. That is, niche scientific journals and enthusiast bloggers are writing about the technology alongside occasional mentions in some major news outlets.

These folks are early adopters or enthusiasts or innovators, and tracking what they are talking about is a great predictor of the next important technology trend.

Exhibit B: Deals and dollars are scarce except for a few private companies doing all the raising 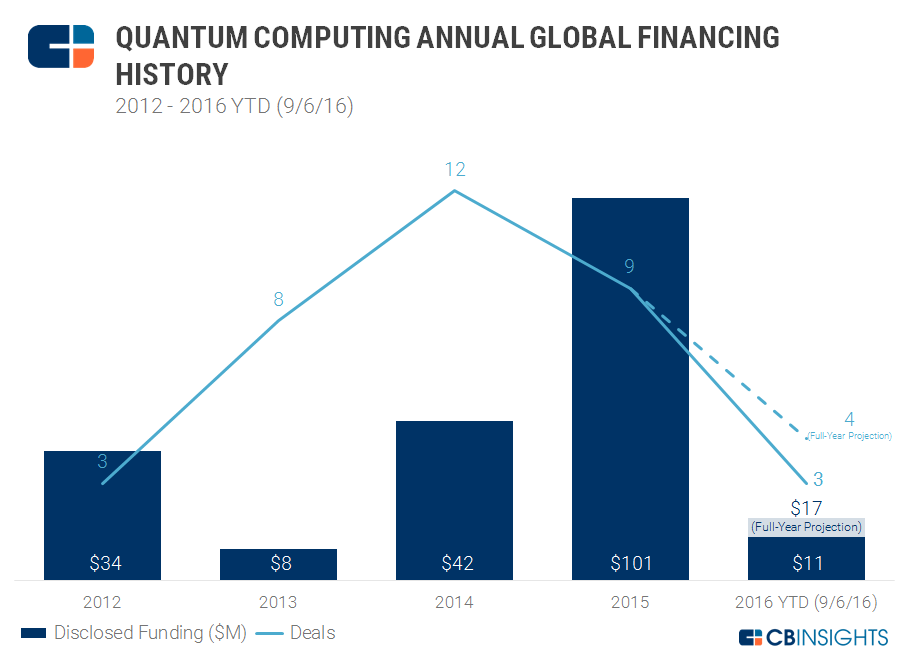 Through the end of this year, quantum computing companies are projected to see far less investment, with roughly $17M put into the category.

It’s important to note that over the 5-year time period, deals to three companies — D-Wave Systems, Cambridge Quantum Computing, and Quantum Biosystems — accounted for 88% of the industry’s total funding. Likewise, in 2015 those three companies took 98% of the total money invested in private quantum computing companies. Therefore, it is possible that one or more mega-round(s) could boost the industry’s funding total through 2016 above the run-rate projection.

Exhibit C: The ecosystem is growing; albeit around a few companies

The data underlying these images comes from CB Insights Business Social Graph —  a tool for analyzing thousands of relationships between companies and their investors to uncover strategies, trends, industry consolidation, etc.

Key takeaways from Exhibit C (above):