2015 is on pace for the fewest VC-backed Seed rounds under $1M in the past four years. A new crop of pre-seed funds could pick up the slack.

In his presentation at 500 Startups’ PreMoney conference, Manu Kumar of K9 Ventures said seed deals have been growing in size and going to relatively advanced startups, leaving a gap that might be filled by pre-seed financing:

“In a way I see the same gap that emerged in 2009 and 2010, which led to the formation of all these seed funds, I see a very similar gap emerging today, mostly around the pre-seed stage.”

The data on Seed-deal size confirms Kumar’s argument. The average Seed round in tech has been above $1M for 8 of the last 9 months. This new normal for Seed rounds means that VCs are investing less and less into Seed rounds of below $1M. In fact, 2015 is on pace to see the fewest tech financings between $150K and $1M in size in the past four years, according to CB Insights’ data.

These $150k to $1M rounds from institutional VCs are what can be considered pre-seed, and they’re increasingly on the decline. 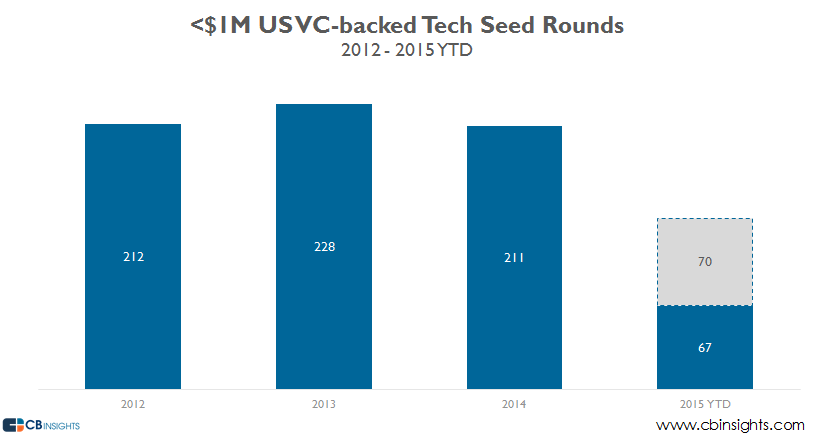 This trend isn’t restricted to a single region: when we look at top VC states California, New York, and Massachusetts, all three are on pace for four-year lows for sub-$1M seed deals, with New York decreasing every year since 2012. 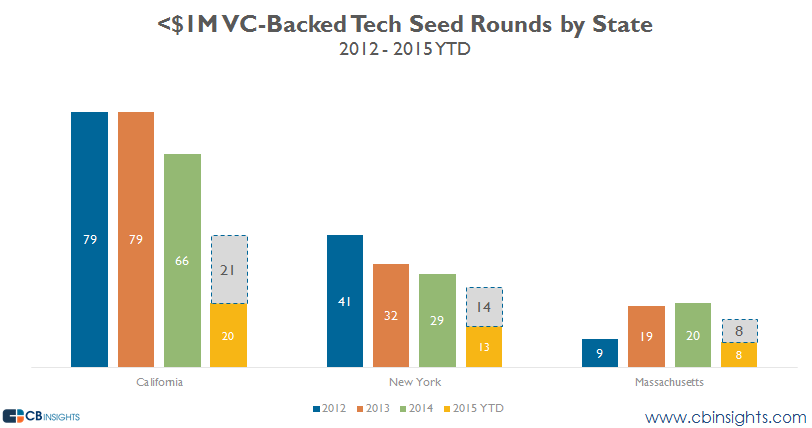 The most active VCs in <$1M tech Seed rounds since 2013 are below. 500 startups and Social Starts are among the most active in both California and New York, while CommonAngels Ventures, a $27M Seed fund, has been the most active in Massachusetts. But overall, the number of VCs participating in and focusing on <$1M Tech Seed rounds is fairly low, with fewer than 20 unique VCs each in New York and Massachusetts doing deals since 2013 and less than 55 in California over the same time period.  While the list is mostly dominated by smaller micro-VCs, there remain a few larger funds like Google Ventures and Qualcomm Ventures who’ve maintained a presence in the pre-seed area.

Want more data on Seed financings? Login to CB Insights or sign up for free below.