Research Brief
2346
As The New York Times analysis of once high-flying unicorn Good Technology showed, some exits are busts. And they're happening a bit more frequently these days.

Not all exits are good. As The New York Times showed in its recent analysis of mobile security unicorn Good Technology, some startups end up selling for less money than they raise. We’ll call this a down exit.

We used CB Insights acquisitions data to identify startups that sold for less than they raised. Our analysis doesn’t include companies that died outright.

Going back to 2010, we identified 214 VC-backed companies that had exits which were for less than the company raised.

If we look at the cohort similar to Good Technology, i.e. those who’d raised at least $50M in disclosed equity funding, we found that there were at least 13 of these significant flame-outs each year since 2011.

There was an uptick last year and in 2015 (through 12/22/2015) with these types of large down exits coming in at double of the level seen in 2010. Some of the high-profile “down exits” include Color Labs and Rdio as well as others which got a bit less attention: 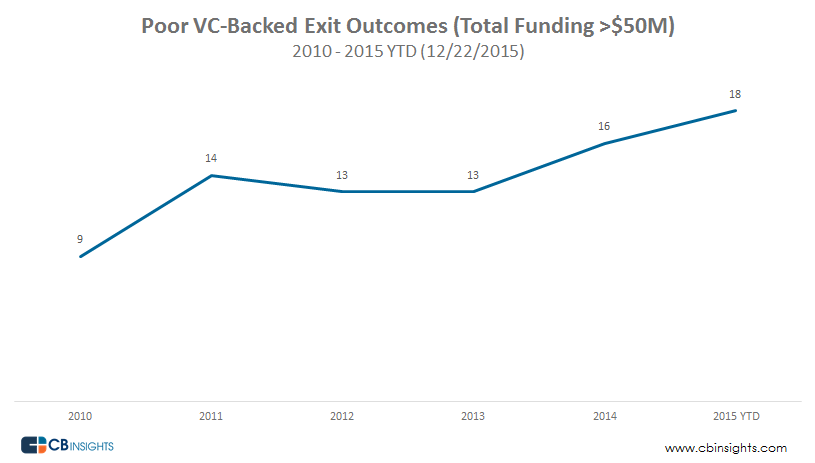 Want to identify companies that might be struggling for M&A or talent poaching purposes? Check out our venture capital database below.