Startups are now building everything from waterless toilets to wearables that predict bowel movements.

“There’s a lot of movement in the bowel space recently,” says Satya Patel, General Partner at VC firm Homebrew, whose fund is hoping to squeeze out a few more deals in what’s quickly becoming their number two market.

But can these “entrepooneurs” really give the bum’s rush to the current market leaders?

CB Insights analyzed a massive data dump on the subject to see which startup will sit atop the throne of the poop tech market.

“Deals have been steaming ahead. More cautious investors worry about a logjam but a couple of solid exits will open up the deal pipeline,” said CB Insights CEO Anand Sanwal.

In their first-ever PoopTech market map, CB Insights identified 41 leading startups in the sector ranging from companies working on microbiomes to toilet accessories that reimagine the poo experience. While securing VC money is always a crapshoot, these companies have raised $690M from 116 investors, floating to the top of VCs’ lists after a brutal process of elimination.

In Season 6 of Shark Tank, toilet tech startup Squatty Potty went home with $350K from Lauri Greiner in exchange for 10% of the company. Then, on March 24th of this year, the company secured $15.7M from Sachs Capital. This got us thinking.

Are other startups innovating in fecal tech? Are they being funded? Where is all the money going? It turns out investors such as Pfizer, Lux Capital, and Morgenthaler Ventures have all made investments in the human waste ecosystem. We are now seeing consumer products such as raised platforms that mimic the squatting position and startups such as Loowat, backed by the Bill & Melinda Gates Foundation, which is developing waterless, energy-generating toilets in Madagascar.

Below, we used the CB Insights database to map out 40+ startups working in poop tech in areas from microbiome therapeutics to bidet development.

This market map is not meant to be exhaustive of companies in the space. Graphic includes private, active companies only. Click to enlarge. 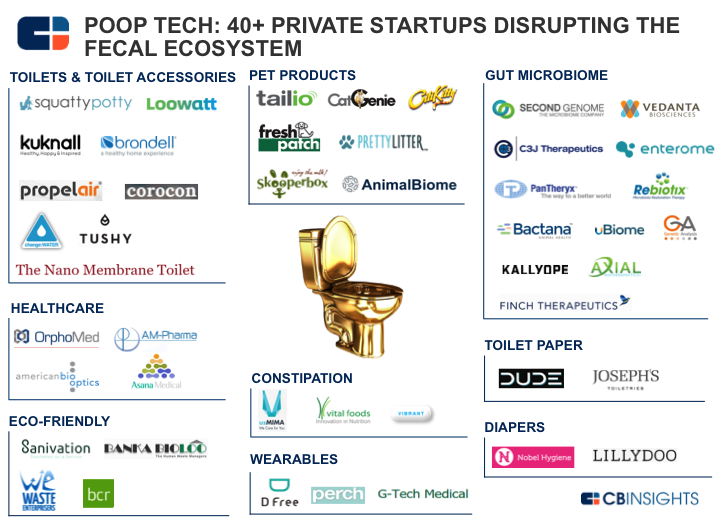 Startups building everything from wearables to new-age toilets have the potential to upend the industry. Look for Poop Tech Startups in the Collections tab.

Toilets & Toilet Accessories: These companies are developing revolutionary new toilets and toilet attachments to change the way we sit, flush, and do everything in between. For example, Tushy has developed a modern bidet attachment while change: Water Labs has built a low-cost, compact, waterless toilet for communities lacking proper plumbing infrastructure.

Healthcare: These startups are developing therapeutics and diagnostics aimed at diseases affecting the colon. OrphoMed is developing pharmaceuticals that act on opioid receptors in the gastrointestinal tract to modulate motility and abdominal pain associated with irritable bowel syndrome with diarrhea (IBS-D).

Eco-Friendly: Startups such as Sanivation,which installs container-based toilets in people’s homes for free and charges a monthly fee to service them, turning the waste into a clean burning alternative to charcoal.

Constipation: These companies are developing innovative solutions to the problem of constipation, which, according to the National Institutes of Health, affects nearly 42 million people in the United States alone. The Sequoia Capital-backed Vibrant provides a capsule that vibrates on the large intestinal wall, hence generating spontaneous bowel movement. The capsule is then washed out of the body during a bowel movement.

Wearables: These companies are developing wearable products that do everything from tracking dirty diapers, such as Perch Baby, to predicting bowel movements, such as D Free.

Gut Microbiome: Companies in this category develop therapeutics, diagnostics, and other products that specifically target the gut microbiome. Andreessen Horowitz and Y Combinator-backed uBiome is developing a comprehensive screening test that identifies specific disease-causing pathogens and other microbes in the gut. For example, the test detects microorganisms associated with symptoms such as constipation, bloating, diarrhea, irritable bowel syndrome (IBS), and ulcerative colitis.

Want more data on poop tech startups? Log in to CB Insights or sign up for free below.