Notable exits of 2017 so far include the acquisition of Delinia by Celgene and the IPO of Jounce Therapeutics.

Over 800 private pharmaceutical companies have had their first exit since 2012. Total exit activity saw annual increases each year from 2012 through 2015, reaching a peak of 201 exits that year. In parallel, dealflow to private pharma companies also reached a high in 2015 with startups seeing nearly $11B in funding spread over 633 deals.

While IPOs quieted down since seeing a rush of activity in 2014, there has been significant growth in M&As over the past 4 years. Recently, the pharma sector saw the IPO of India-based Eris Lifesciences and the $775M acquisition of California-based Delinia by Celgene.

IPOs continued to drop last year, down 27% in 2016. But this year is off to a stronger start with 2017 seeing 33 IPOs year-to-date. A few notable deals this year include the $1.5B IPO of Switzerland-based Idorsia in June, the $968M IPO of Tiansheng Pharma in May, the $607M IPO of Athenex in June, and the $482M IPO of Jounce Therapeutics in January. 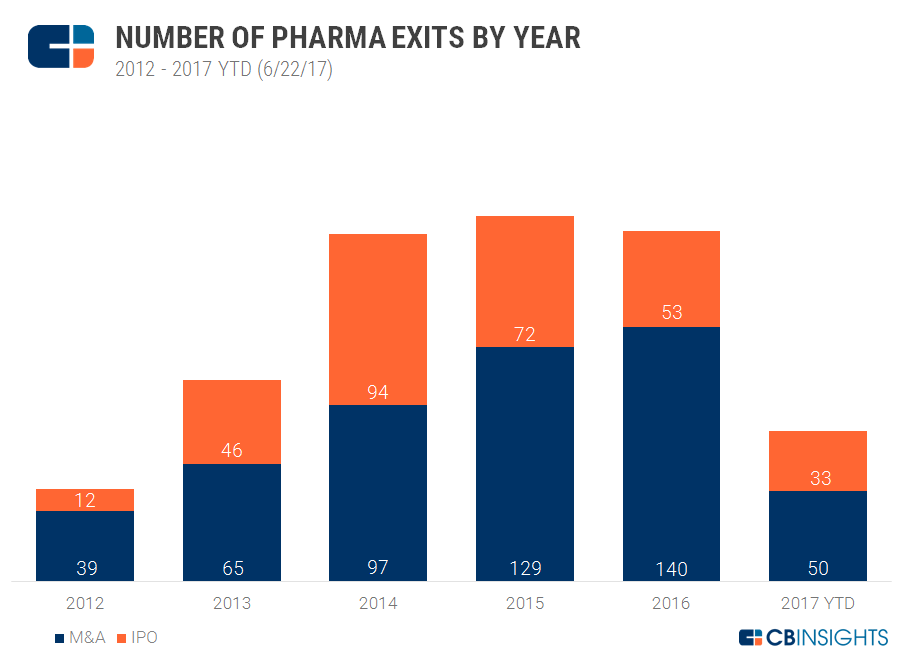