The majority of deals to pharma companies are seed, angel, and Series A rounds.

Pharmaceutical startups are now not only developing new approaches to specific conditions but are building novel platforms capable of treating a host of diseases. For example, CRISPR Therapeutics, Editas Medicine, and Intellia Therapeutics are pioneering the field of genomic medicine by using the gene editing technique CRISPR to treat genetic conditions such as Cystic Fibrosis and Duchenne Muscular Dystrophy.

Below we used CB Insights data to analyze yearly and quarterly equity investment trends to private pharmaceutical companies as well as funding by deal stage.

We define pharma startups as those working across drug delivery, drug development, and drug manufacturing. Medical devices, digital health companies, and diagnostics are not included.

The 3 largest equity deals since 2013 were all to Massachusetts-based companies. These include the $600M equity round to Boston Pharmaceuticals in November 2015, the $543M raise of Akcea Therapeutics in January 2016, and the $474 Series F of Moderna Therapeutics in August 2016. 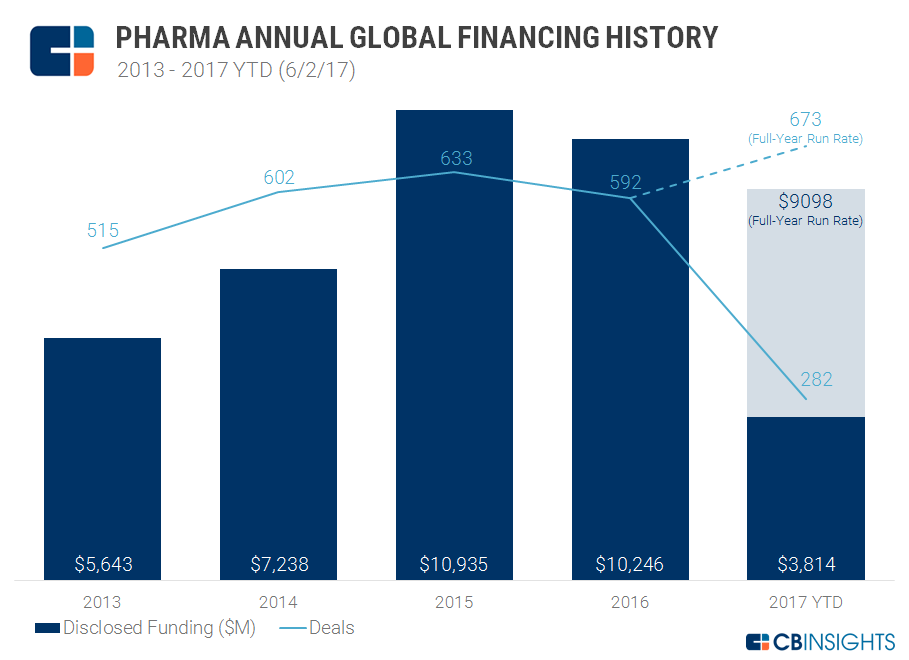 Q1’17 saw large $100M+ deals to Vir Biotechnology, with investment from ARCH Venture Partners and the Bill & Melinda Gates Foundation, and to Ascletis, with investment from Goldman Sachs and C-Bridge Capital, among others. Launched in January, Vir Biotechnology raised a $150M Series A to apply breakthroughs in immune cell re-programming to viral and infectious diseases. The company will be developing its own internal pipeline in addition to in-licensing technology platforms and other biotech assets. China-based Ascletis raised a $100M Series B in January and is working on anti-viral combination therapies for hepatitis C, its lead product, as well as treatments for HIV and liver cancer. 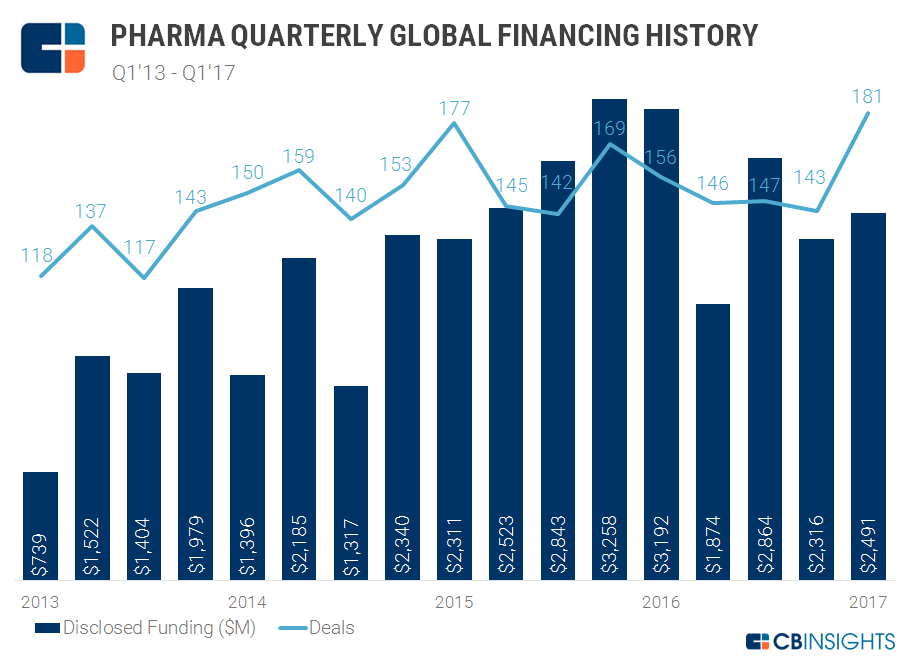 Overall, deal share remained relatively static between 2015 and 2016 with only slight percentage shifts. Broken down by stage, deals to early-stage companies (seed/angel and Series A) represented 39% of all deals in 2016, roughly equal to 2015 but still down from 45% in 2013. So far this year, early-stage deals have occupied 36% of all deals.

Two notable early-stage deals completed this year include the $62M Series A of Genoa Pharmaceuticals from investors including Novo A/S (holding company of Novo Nordisk), TPG Biotech, and F-Prime Capital, and the $50M Series A of Vividion Therapeutics from Cardinal Partners, Versant Ventures, and ARCH Venture Partners.

Startups working in oncology, infectious disease, genomic medicine, and many other sectors are transforming the industry. Sign up for a free trial and look for Pharma Startups in the Collections tab.

Mid-stage (Series B & C) deals fell slightly last year from 22% in 2015 to 19% in 2016. In 2017 YTD mid-stage deals have taken 20% of total deal share. Late-stage (Series D/E+) deals, down from a 5-year high of 9% in 2014, represent 5% of all deals to pharma companies in 2017 YTD. One notable late-stage deal recently completed in April was the $45.5M Series D of Arsanis from investors including the Bill & Melinda Gates Foundation, Google Ventures, OrbiMed Advisors, and SV Health Investors. Arsanis is developing monoclonal antibodies for the prevention and treatment of bacterial infections such as Staphyloccous aureus. 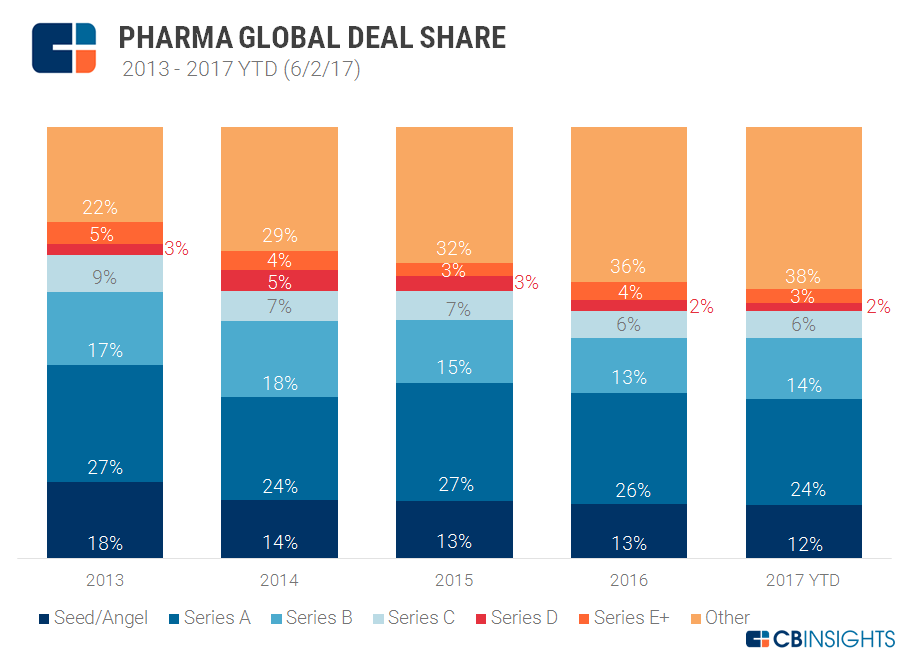