While biotech/pharma is set to reach a high in investment dollars this year, the exits and growth of digital health are trumping traditional life science deals.

Are biotech and pharma losing steam to tech-infused investments into digital health and healthcare IT? We used CB Insights data to analyze both areas to understand the health and momentum of each sector.

The biotech/pharma industry continues to grow with 2013 posting $4.8B+ in investment. $4.6B+ has already been deployed this year which suggests that biotech/pharma is poised to hit a 6-year high by the end of 2014. While biotech/pharma may win in absolute numbers, the digital health industry has had explosive growth since 2009, already breaking $3B this year. At the current rate of investment, digital health is on track to exceed $4B in funding, which represents a 987% increase since 2009, and a 91% increase since last year. 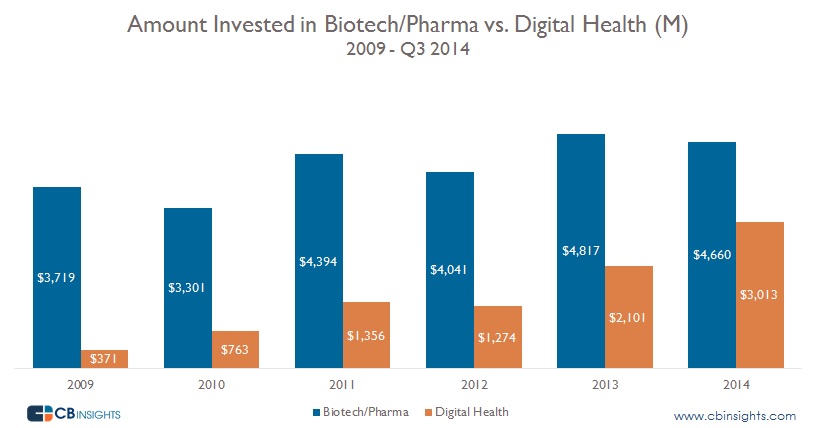 Digital health deaflow significantly increased between 2009 and 2013, even passing biotech/pharma last year with 492 deals which represented 51% growth from 2012. However, the industry hit a bit of speedbump in 2014 with deal activity falling fairly significantly.  Biotech/pharma, on the other hand, has maintained consistent growth year-over-year since 2009, with 2014 scheduled to hit a high of 600+ deals assuming current deal run-rate. (data through Q3’14) 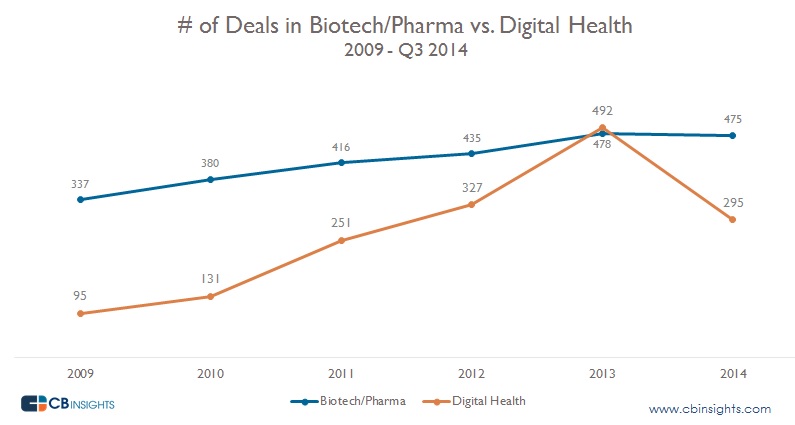 Exits in the biotech/pharma industry continue to increase, with 2014 already reaching a high of 157 by Q3. Digital health on the other hand, has lost steam on the exit front similar to financing deal activity. 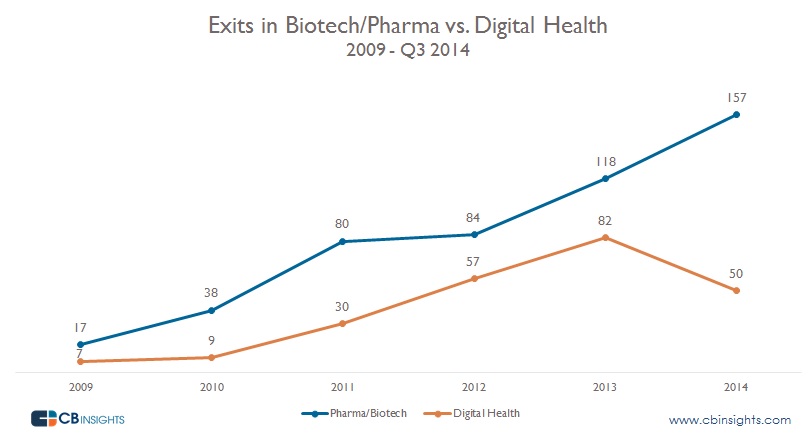 The biotech/pharma and digital health industries have both had quite a few successful billion dollar exits. Veeva Systems had an incredibly successful exit in 2013 that gave the company a market cap of $4.5B and has made it the most capital efficient exit of a VC-backed company in the last 2 years (ahead of WhatsApp, in fact). On the other hand Castlight Health, which had a multi-billion dollar opening valuation has fallen on harder times as the stock currently trades significantly lower than the approximately $40 price it had on its opening day.

Intrexon, a synthetic biology and genetics company, had the most successful IPO on the biotech/pharma side and was valued at over $2.3B by the end of its first day of trading. Though both sectors have successful exit records, the digital health companies amassed a valuation of more than $10B compared to the $6.3B on the pharma/biotech side.

*Analysis did not include debt or grant rounds

Which sector holds more promise for future growth? Leave your comments below

Want more healthcare investment and exit data? Sign up for a free account to the CB Insights venture capital database below