Both deals and funding to payment tech startups increased in Q2'16 with funding rising 59%. The quarter saw Affirm raise a $100M Series C.

After seeing funding plunge at the end of Q4’15, payments startups have made a strong recovery raising $912M across nearly 150 deals in the first half of 2016. The category has now seen two-straight quarters of funding growth, and 70+ deals in five of the last seven quarters.

Using CB Insights data and analytics, we highlight quarterly financing trends as well as the markets that have seen the most deal activity in the first half of 2016.

In Q2’16, payments startups raised more than $560M across 75 deals, representing a 59% increase in funding over the previous quarter.

Funding is trending upward. The last two quarters have seen growth in dollars deployed after funding plummeted in Q4’15. Q2’16 included some large notable deals including a $100M Series C to Affirm and $50M Series C to MobiKwik.

In terms of deal count, the last 7 quarters notched 65+ deals with Q2’16 reaching the 4th-highest deal count on record. 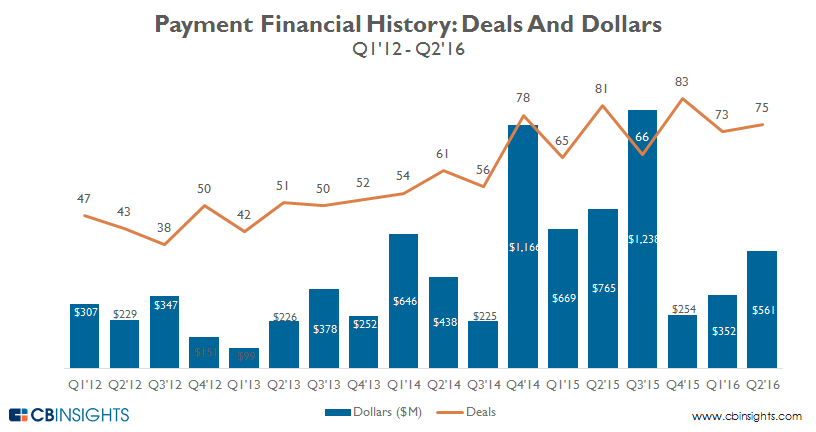 Unsurprisingly, the US market took accounted for the most deals to payments startups in the first half of 2016.

The United Kingdom ranks second, and is the home to well-funded startups like Transferwise and Azimo, among many others. The third spot is tied by Germany (home to Number26 and Payleven) and India (home to MobiKwik and Juspay) followed by Canada, Singapore, and Denmark. 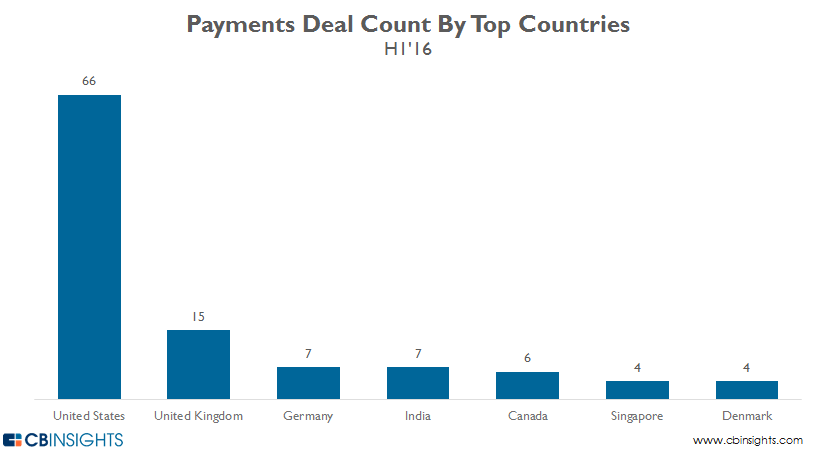