While many well-known payments startups (Square being one example) are staying private much longer, payments exits have been exploding. These exits have overwhelmingly come in the form of acquisitions, including Paypal’s acquisitions of Braintree and Paydiant.

Until very recently, there were rarely more than 5 exits of a venture-backed payments company in a quarter. But Q4’14 and Q1’15 broke the pattern, with 11 and 8 exits, respectively. Notable recent exits include Yodlee’s $75M IPO in Q4’14 and Mozido’s $675M acquisition of PayEase in Q1’15. 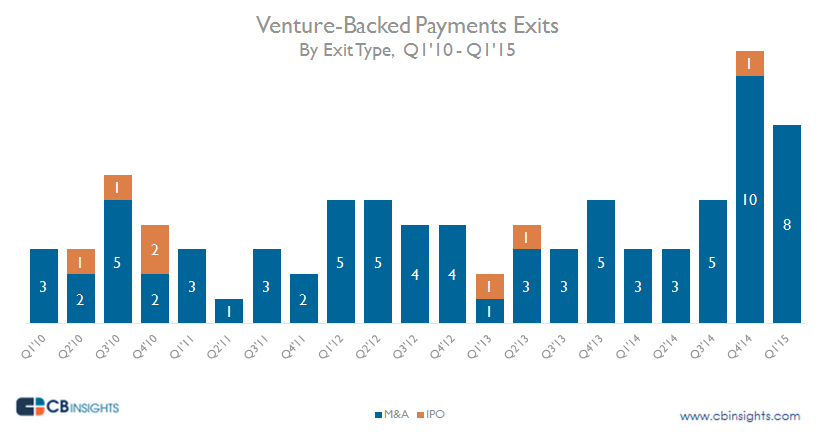 As expected, given the relative recent scarcity of IPOs among venture-backed companies, very few payments exits have taken the IPO route. Over the 5 years analyzed, there were only 7 IPOs among 87 venture-backed payments startup exits. However, the few payment-startup IPOs did account for some of the high-value exits. Some recent IPOs include QIWI’s $884M IPO in Q2’13 and Xoom Corporation’s $509M IPO in Q1’13. 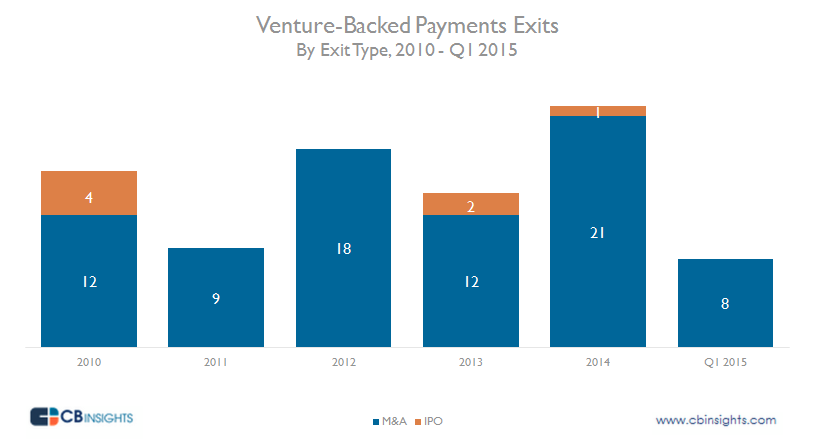 Accel Partners and Sequoia Capital were among the investors with the most payment-company exits in their portfolios. Looking at Accel Partners’ portfolio companies, exits included Venmo and Braintree (both were first financed by Accel in a Series A round). Sequoia’s portfolio also saw noteworthy exits from payment companies, including those of Yodle and Green Dot.

The most well-funded companies before exit included Fleetcor, Yodlee, and Clear2Pay, all of which received more than $100M in funding each before exiting. However, many of these companies received relatively very little funding compared to many of their still-private counterparts. For example, Square has raised more than $700M and has yet to exit. That’s more than 10 times the amount of funding we saw for any of the well-funded exited companies in the list below.

Want more data on payments startups? Check out our venture capital database below.