Driven by payment companies like MasterCard, MercadoLibre, and Tencent, QR codes reached an all-time high in mentions on Q3'18 earnings callings. Here is what they're talking about, and why QR codes are becoming a primary digital payment service around the world.

QR codes are a versatile technology that merge the physical and digital world — essentially creating digital hyperlinks in the physical world.

Although QR codes are not a new technology — the highest number of granted patents were filed in 2012 — adoption as a form of payment continues to intensify around the world.

This is particularly true in emerging markets that have previously relied heavily on paper transactions.

In China, Ant Financial and Tencent are leveraging QR codes to transition the country to a cash-less mobile-based economy. For example, in 2015 Chinese citizens transacted an estimated $1 trillion through mobile payments using QR codes. In 2017, this figure grew to $15.5 trillion. In 2020, mobile transactions are forecasted to grow to $45 trillion, according to reports — essentially making China cashless.

This shift toward QR codes is increasingly evident in both quarterly earnings call and news articles mentions. According to CB Insights data, the term “QR codes” was mentioned a record 41 times by executives on Q3’18 earnings calls. 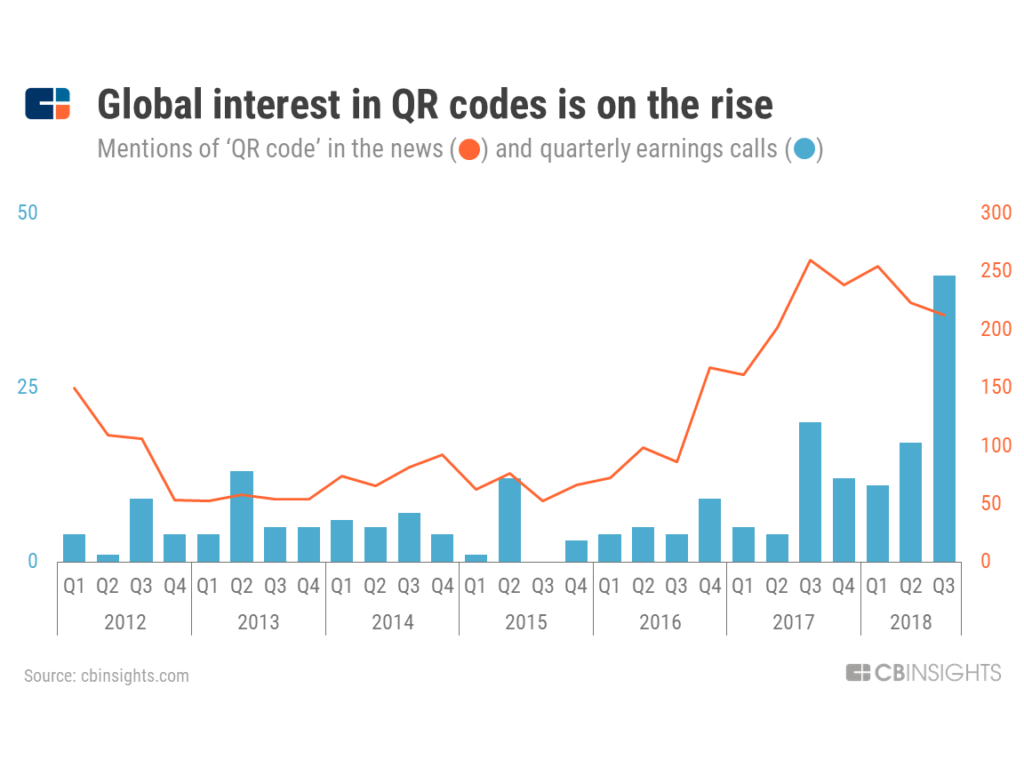 Why are QR codes becoming more of a focus?

QR codes as a form of payment are becoming more popular for a few reasons, including:

As regions shift away from cash, QR codes are looking like the most economic method for digitizing transactions.

Adoption is evident in many large payment companies’ current strategies, and discussions on earning calls.

For example, on MasterCard’s Q1’18 earnings call, CEO Ajay Banga said, “we are developing new ways for consumers to pay and for merchants to get paid through QR codes and particularly in emerging markets.”

Also, Visa has similar plans to scale innovation and digital payments via QR code acceptance, as discussed on its Q3’18 earnings call.

In China, Tencent’s WeChat and Ant Financial’s AliPay have proven QR codes can be a wide-scale method of payment. Driven by innovative fintech companies, low credit card penetration, and the spike in mobile phones, China has established itself as the world leader in mobile payments — and the model for all emerging markets.