Research Brief
2595
Funding to payments startups recovered a bit in Q1'16, but is still way off the quarterly funding levels seen in 2015.

However, the bulk of funding occurred during the first 3 quarters of 2015, and the category saw a dramatic plunge in funding terms in Q4’15 as the mega-deals dried up (even as deals continued trending up).

In Q1’16 payments startups saw a slight drop in deals but an increase in funding after a huge dropoff in dollars in Q4’15.

Some notable deals in Q1’16 include a $76M growth equity round to StoneEagle, a $55M Series A to Blockstream, and a $50M Series E to Aria Systems.

Its worth noting the enormous spike in payments funding in Q3’15 is attributable to 3 deals: the $680M corporate minority to One97 Communications, $400M Series A to Ant Financial Services Group, and a $90M Series D to Stripe. Together, these three rounds accounted for 72% of funding in Q3’15.

Check out the quarterly trends below. 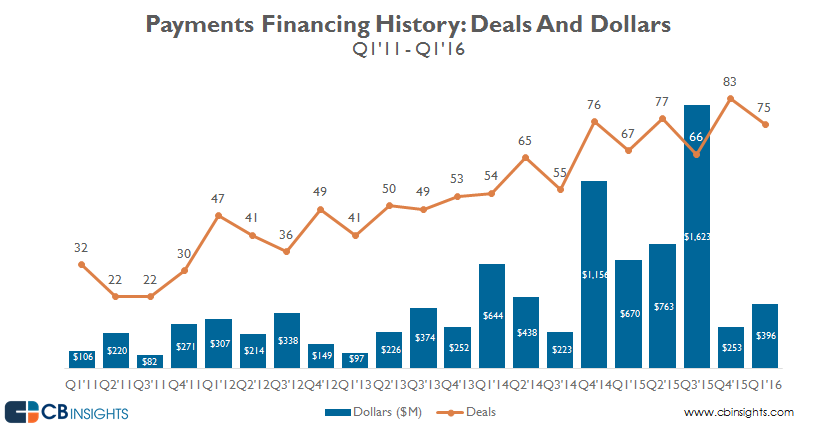 Of note, Powa Technology, which made our list of well-funded companies in 2015, was forced into an asset sale after raising $227M and running into financial difficulties. It is one of 59 entries in our Downround Tracker.