David Tisch’s newest company Spring officially launched last week. The company raised a $7.5M Series A that can be described as a party round (or perhaps block party round) as it had participation from 45 total investors.

When looking at all Seed/Series A tech deals since 2009, we found that Spring’s 45 investors made it the largest party round in the time frame, characterized as rounds in which the investor syndicate has 10 or more investors. The average Seed/Series A tech rounds averages 2.58 investors so 45 is just a tad bigger than the norm.

Interestingly, the 20 largest party rounds (by # of investors irregardless of a lead) raised $3.18M which is higher than the overall Seed/Series A tech average of $2.9M. Spring’s $7.5M round was the 3rd largest party round behind Rally.org’s $7.9M Series A, and Keith Rabois’ OpenDoor Labs’ $9.95M Series A (Interestingly, OpenDoor’s notoriety helped another eponymously named app).

Also of note, since 2009 there have been a total of 378 Seed/Series A tech rounds with 10 or more investors highlighting the growing number of early stage investors participating in tech investments.

Of course, it’s worth remembering that contrary to conventional wisdom, companies that raise party rounds actually raise follow-on financing at a higher rate.

The full list of the largest party rounds by deal size below. 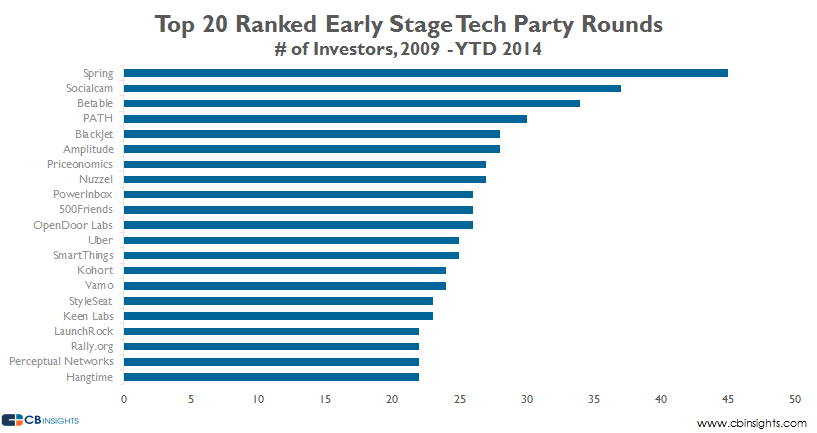