Mirantis has raised big money, has signed notable partnerships and has a lofty valuation. Are investors getting more bullish on OpenStack companies?

We recently released some data about the growing number of $100 million+ financing rounds and while the Ubers, Snapchats and Airbnbs of the world get a lot of attention, one of the more interesting enterprise Tech IPO pipeline companies to  recently raise a $100 million round was OpenStack company, Mirantis.  OpenStack is an open-source cloud platform started by NASA and Rackspace in 2010.

The company’s mega-financing was dubbed by the company as the largest Series B to an open source company ever (yes – seriously) and came from August Capital and Insight Venture Partners and many returning investors including Sapphire Ventures, Intel Capital, Ericsson and WestSummit.

Mirantis, valued at $800 million at the time of the last financing, began as an OpenStack systems integrator and now offers an array of data center & cloud infrastructure/management products has seen a great deal of partner & customer momentum. CB Insights partnership data shows them cozying up with a number of tech heavyweights including Oracle, VMWare, Juniper Networks and Google among others.

This screenshot from the CB Insights Business Social Graph highlights their customer/partner relationships (blue) along with investor (green) and competitor (red) connections. 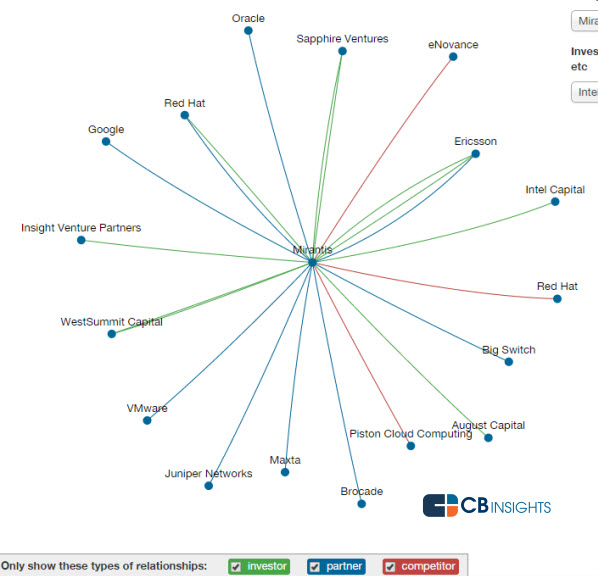 The interesting one here is Red Hat which invested in the company’s June 2013 $10 million financing and with whom Mirantis also had a partnership. That relationship, however, soured, according to reports, due to Red Hat’s acquisition of Mirantis competitor, eNovance and Mirantis moving into product (from consulting).

And so as the extract from Social Graph above highlights, Red Hat is an investor, partner and competitor to Mirantis – definitely not the typical type of relationship you’d usually find on the graph.

Ben Kepes reported that Red Hat tech chief Paul Cormier had this to say about Mirantis at the time of the souring relationship:

We took an investment in Mirantis under the pretense that was going to be a consulting [partnership]. We were looking for a consulting partner and they decided to get into the product space. That’s their prerogative

Interestingly, VMWare and Mirantis who signed a partnership in November 2013 “to develop and deliver solutions that help customers accelerate large-scale cloud deployments based on the Mirantis OpenStack distribution and VMware technologies” also appear to be on a collision course given Mirantis recently cozying up with Juniper Networks.

With its near unicorn level valuation and reports that the company was booking $1 million in bookings per week in 2014 and the aforementioned investor and partner momentum, Mirantis is a company worth watching.

But is Mirantis’ momentum also carrying over to the larger OpenStack industry?

A quick basic search on CB Insights for companies with “OpenStack” in their description shows that in terms of deal size, Mirantis is clearly the largest deal to the space.

Using Industry Analytics on the set of OpenStack companies, we see the funding trend to companies in the OpenStack space. As the graph below highlights, despite the momentum of Mirantis, financing and deal activity to OpenStack companies has been lukewarm. Q1 2015 has not seen a ton of activity either. Solinea is the latest deal in the space and raised a small financing round yesterday. 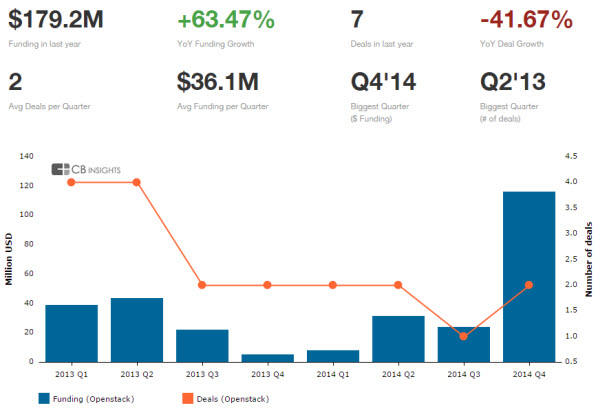 With rumors of a Mirantis IPO, it will be interesting to see if OpenStack companies garner more attention and funding in the coming quarters.

Want to track VC investment into enterprise tech companies? Login to CB Insights or create a free account below.