Within the on-demand category, the valuations of certain startups have reached incredible heights. Ride-hailing companies Uber and Didi Chuxing rank as the highest-valued private startups in the world.

In this brief, we examine the quarterly valuation history from 2013 through 2017 YTD (5/3/2017) of 9 notable startups in the on-demand category. We divide the startups into two categories, ride-hailing startups, and food delivery and logistics services startups. We define the on-demand category more broadly as private companies that aggregate demand on mobile devices and applications, enabling near-instant access to a wide variety of offline services.

Note: Valuation history for each startup is mapped on a quarterly basis, using the latest available valuation in each quarter. This smooths out in-quarter valuation fluctuations in a few instances. 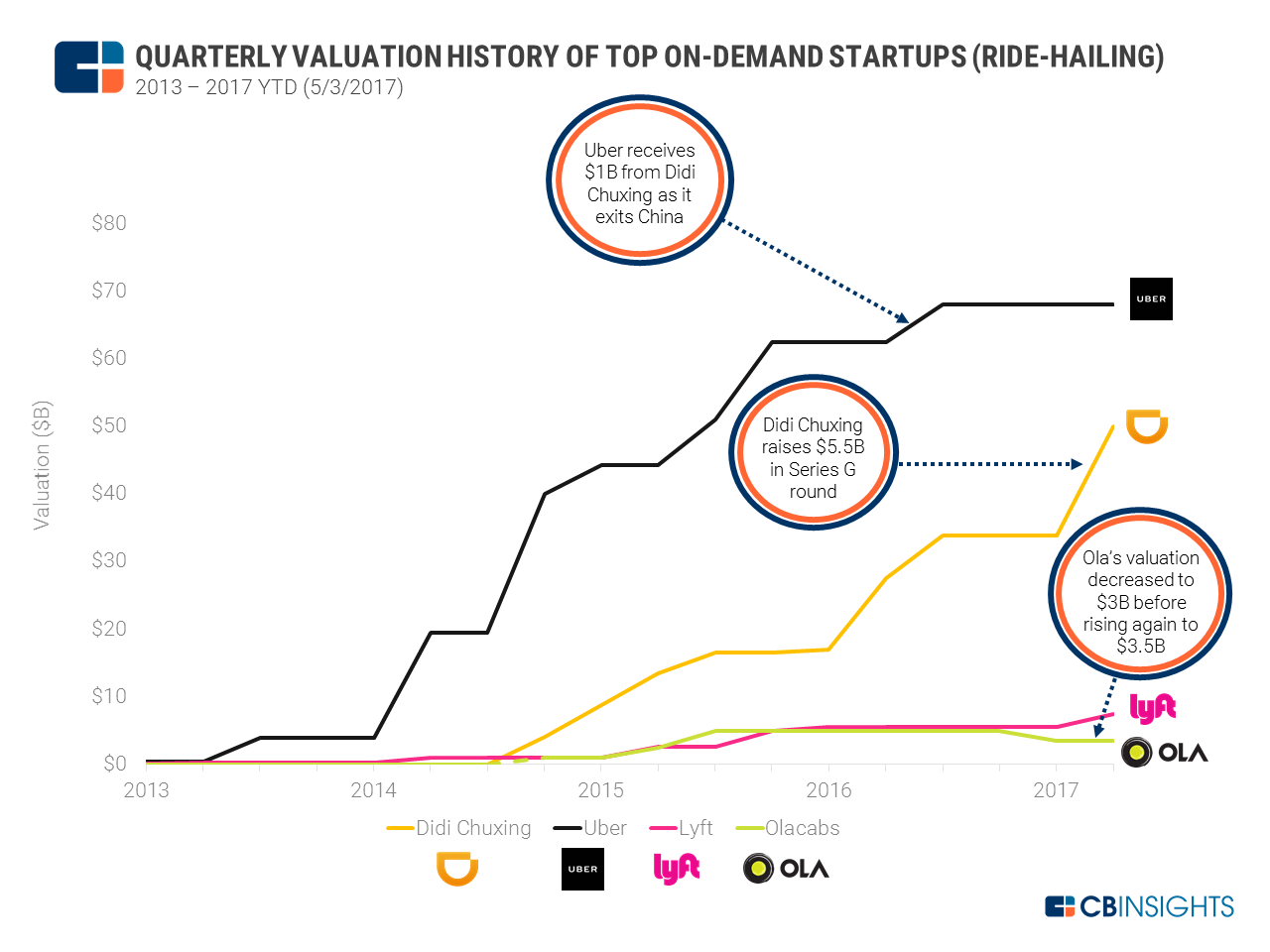 Uber, Didi Chuxing, Lyft, and Ola are among the most well-funded ride-hailing companies in the world. Uber has transformed itself into a well-known international brand; Didi Chuxing has remained the top player in China; and Lyft and Ola have both made their names as strong regional players. However, upon closer analysis, each of these companies’ valuation histories offers a more nuanced understanding of their health and trajectory.

Although Uber remains the most highly-valued startup, it has encountered its fair share of well-reported PR nightmares. But, since Uber has not raised a significant new round of funding since Q3’16, it is not yet clear whether the most recent revelations will affect the company’s valuation, and if so to what extent.

Operationally, Uber also saw a high-profile retreat from China after several years of costly competition against rival Didi Chuxing, which took over Uber’s operations in China in exchange for a minority stake and a $1B investment in Uber.

Didi Chuxing, for its part, recently received a massive $5.5B Series G round of funding in late April. The mega-round included investors such as Softbank Group and Silver Lake Partners, and propelled Didi Chuxing’s valuation from $33.8B to $50B. With this new funding, the company is looking to expand internationally and fund self-driving tech development, potentially setting off further competition with Uber.

Although on a much smaller scale, Lyft saw an up round (from $5.5B to $7.5B) when it received a fresh $600M Series G round of funding from investors including KKR and Rakuten.

Ola, on the other hand, raised $580M from SoftBank as part of a Series H down round in Q1’17, in which the company’s value dropped from $5B to $3.5B. The company subsequently received another down round in April 2017 which further pushed its valuation down to $3B. Ola was then, however, able to raise an additional $104.4M as part of a Series I – II round on 5/3/2017 in which its valuation increased back to $3.5B. This highlights the cutthroat and volatile battle Ola is waging against Uber on its home turf of India.

On-demand startups in the ride-hailing, food delivery, and services industries are creating fresh competition across sectors. Sign up for a free trial and look for On-Demand in the Collections tab. 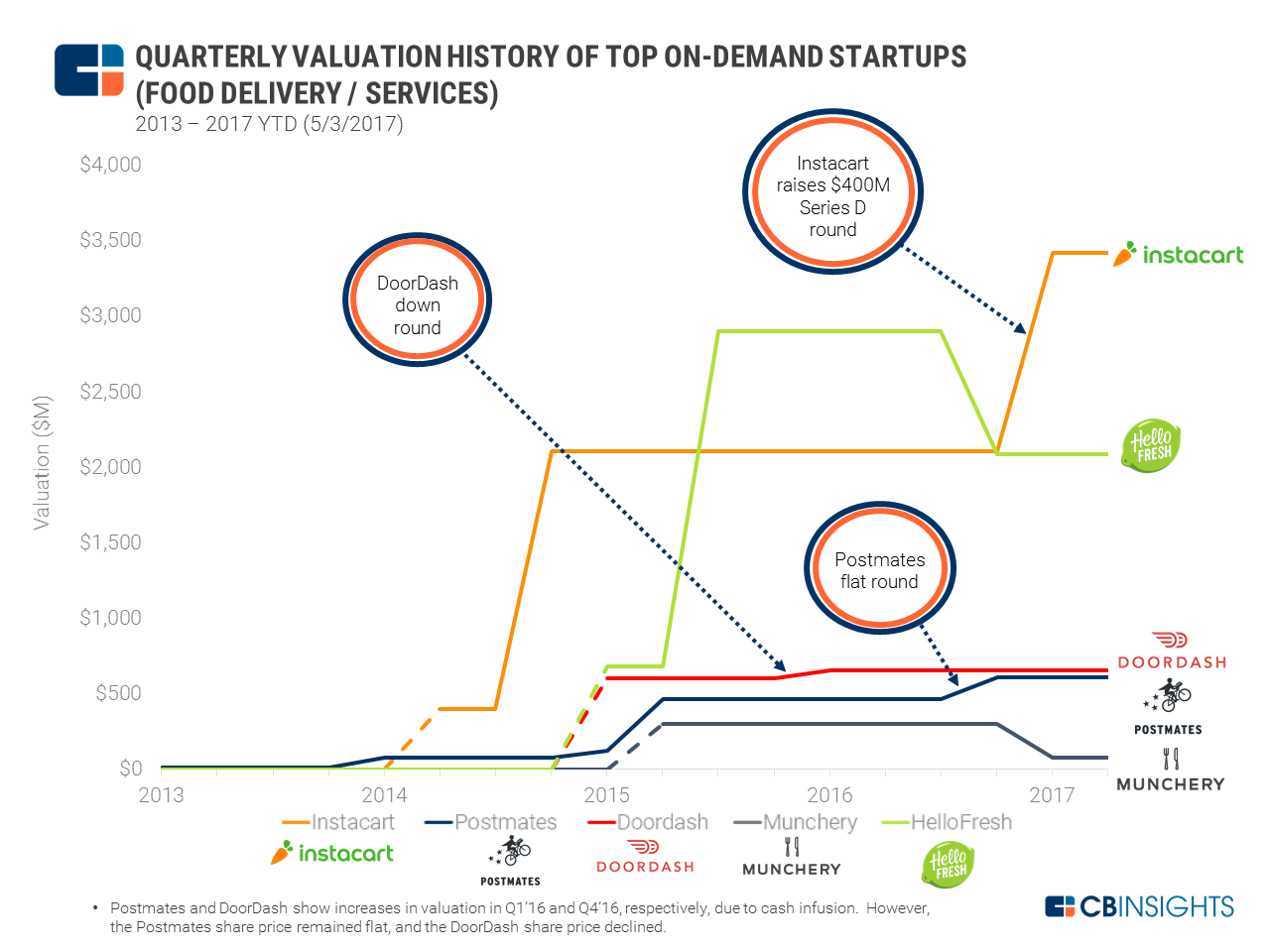 On-demand startups outside of the ride-hailing arena generally command much lower valuations, at least in comparison to Uber and Didi Chuxing. Some of the most well-funded on-demand startups in the areas of food delivery and general services include Instacart, Postmates, DoorDash, Munchery, and HelloFresh, whose valuation histories are highlighted above. Food delivery, in particular, has been a notoriously tough space in which to compete. This sector of on-demand has seen high levels of consolidation, and lower numbers of new entrants, as existing players struggle to maintain traction in a sphere that has otherwise lost investor interest.

Although Instacart is not immune to the problems plaguing food delivery startups, it was able to secure a $400M Series D round of funding in Q1’17 from investors including Andreessen Horowitz and Y Combinator with a healthy valuation jump. This new round of funding boosted the company’s valuation from $2.1B to $3.4B. While Instacart’s recent funding is one bright spot, the valuation histories of other competitors in the on-demand food delivery and logistics space provide a different picture.

Postmates received a $141M Series E round of funding in Q4’16, which kept the startup’s price per share stagnant. However, there was slight bump in the company’s post-money valuation due to the company’s cash infusion.

Similarly, while Doordash’s post-money valuation increased due to an infusion of cash after its Series C funding round in March 2016 , the startup actually saw a decline in its share price.

HelloFresh, which at one point was the highest-valued startup of this cohort, raised $88.5M in a Series G down round in Q4’16, in which the company’s valuation fell from $2.9B to $2.09B. Munchery, which was originally valued at $300M, went through a recapitalization in Q1’17 in which the startup’s value plummeted to only $80M as its co-founders departed the struggling company.

Want more data on the on-demand startup space? Log in to CB Insights or sign up for free below.