Research Brief
2839
There were less first fundings of private on-demand companies in the US in 2015 than the year before.

Funding is crashing to on-demand companies globally with two quarters straight of declines. But that trend has been driven by a decline in mega-deal fundings, and does not necessarily reflect trends at the very early stages.

Are investors still backing new companies in this space? Are they still on the hunt for the next Uber or Postmates, or have they pulled back from doing first financings to fledgling companies?

We used CB Insights data on first fundings as a proxy for investor interest in new on-demand companies, and tracked the data year-by-year to determine whether the overall rush into young companies in the on-demand space has cooled.

The data shows that there was a significant increase in first rounds to on-demand companies that were previously unfunded, both in the US and globally between 2013 and 2014. But while growth continued at the global level in 2014, there was a downturn in the US in 2015 with 33 first funding deals compared to 36 the year before.

This trend may mean that investors still perceive an opportunity in on-demand outside of the US, but have begun to scale back within the US market where some areas like food delivery seem relatively mature or crowded. 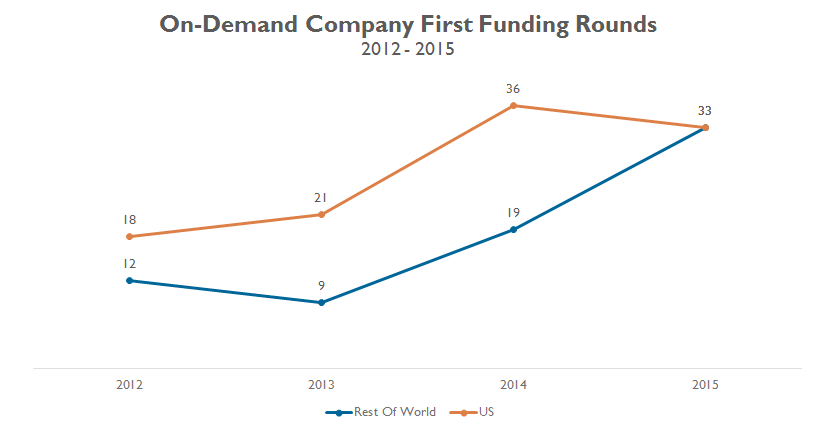 Note: We included angel, convertible note, crowdfunding, incubator/accelerator, seed, and Series A deals as first fundings in our analysis but excluded private equity and growth equity and other types of financings that are associated with more mature companies receiving funding.