The latest quarter marked a dramatic three months for the on-demand category.

However, amidst the excitement surrounding top players in Q2’16, the sector as a whole saw deal activity decrease slightly from the prior quarter, marking the third-straight quarter of deal activity below 70 deals when at its peak in Q3’15 the on-demand category saw 90 deals.

Scroll down to view data on quarterly and annual funding trends, deal share by stage, and the most well-funded on-demand companies. Our on-demand category includes private companies that aggregate demand on mobile devices and applications, enabling near-instant access to a wide variety of offline services.

Deals to on-demand startups dropped to 55 in Q2’16, down from 66 the prior quarter, but maintaining the sector’s streak of 50+ deals for the seventh-consecutive quarter. Funding dollars grew more than 3.5x from Q1’16, driven by Uber’s $3.5B private equity round and Didi Chuxing’s $1B Series F financing from Apple. Without those two rounds though, funding would still have grown 23%.

Deals and funding both peaked in Q3’15 with $8.3B in funding over 90 deals. Uber and Didi bolstered their war chests with two $1B+ deals each in that quarter, while Chinese food delivery giant Ele.me raised a $630M Series F, and Ucar Group raised a $550M Series B. 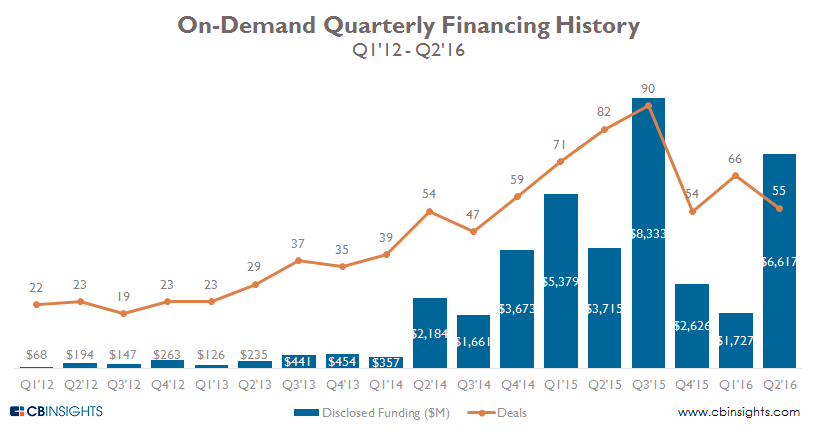 Uber, Didi, and AirBnB vs. the rest of on-demand 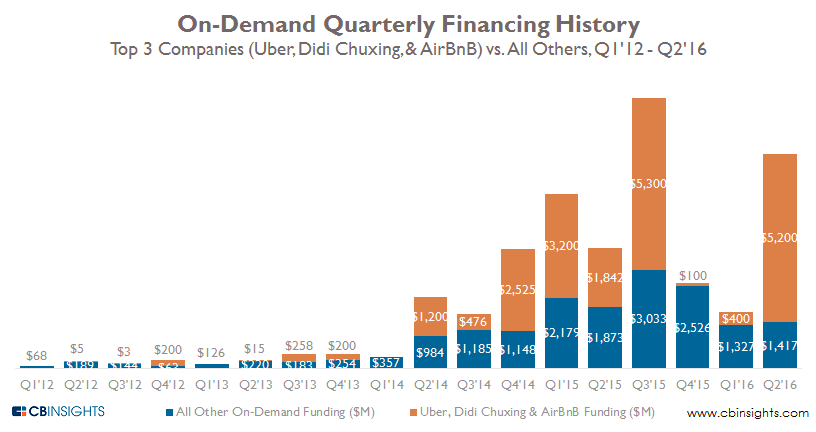 If funding rounds continue at their current rate and size, full-year deals and dollars in the on-demand sector may both fall by roughly 20%. However, as mentioned above, the 2015 funding peak was bolstered by a flurry of large $1B+ equity deals to Uber and Didi. 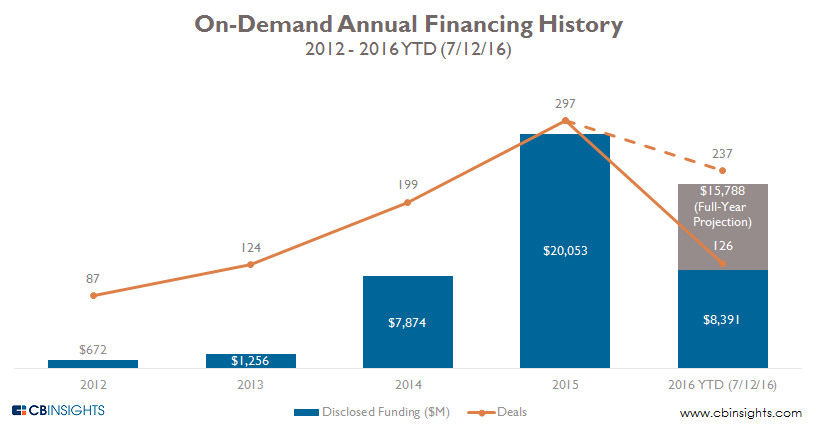 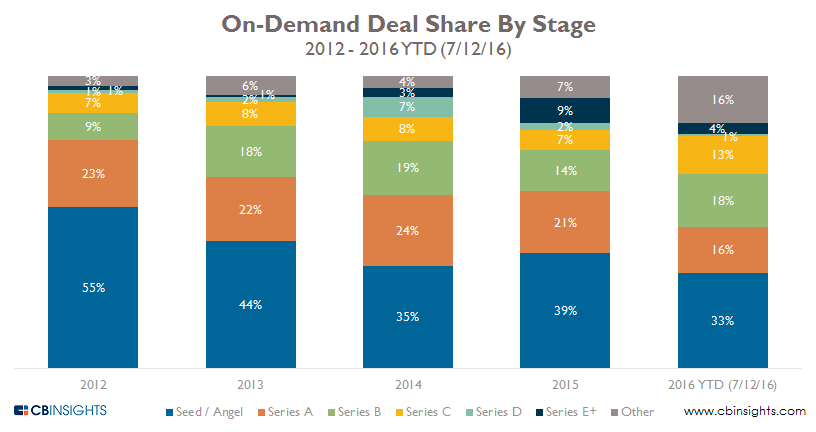 Unsurprisingly, Uber tops our list of most well-funded on-demand companies, with a whopping $12.7B in disclosed funding. Most notably, its $3.5B round in June 2016, has been followed by a $1.15B  loan in July from Barclays, Citigroup, Goldman Sachs, and Morgan Stanley. This milestone marks a departure from the company’s largely equity-based financing to date. Uber also has multiple corporate shareholders including Toyota and China Life Insurance.

Following Uber is Didi Chuxing, with $8.4B. Didi, like Uber, raised more than a billion dollars in the first half of 2016 alone, including a $1B investment by Apple in May and a $400M corporate minority from Poly Group in June. Uber’s valuation is currently more than twice that of Didi’s — you can check out our comparison of the ride-hailing giants’ valuations over time here.

Our list includes other ride-hailing startups such as Lyft, Grab, Olacabs, Ucar Group, and Gett. Many investors have made multiple ride-hailing bets; we previously tracked overlapping investments in the biggest names using our business social graph.

Want more data about on-demand funding trends? Login to CB Insights or sign up for free below.