Research Brief
1862
Over $9 billion in funding has gone to the on-demand economy. Here are 9 charts to get you up to speed on the biggest financing trends and investors.

VC dollars are pouring into the on-demand economy, the world of apps enabling shipping, food delivery, home cleaning, car rides, laundry and a host of other offline services.  We break down what’s been happening in on-demand mobile services in 9 charts.

In 2013, on-demand mobile startups raised $672M across 54 deals. Just a year later, funding ballooned to $4.12B in 2014. The funding explosion has continued into 2015 as giant funding rounds including to Uber and Lyft have lifted funding in just the first four months of 2015 to $3.78B across just under half the deals tracked in 2014. 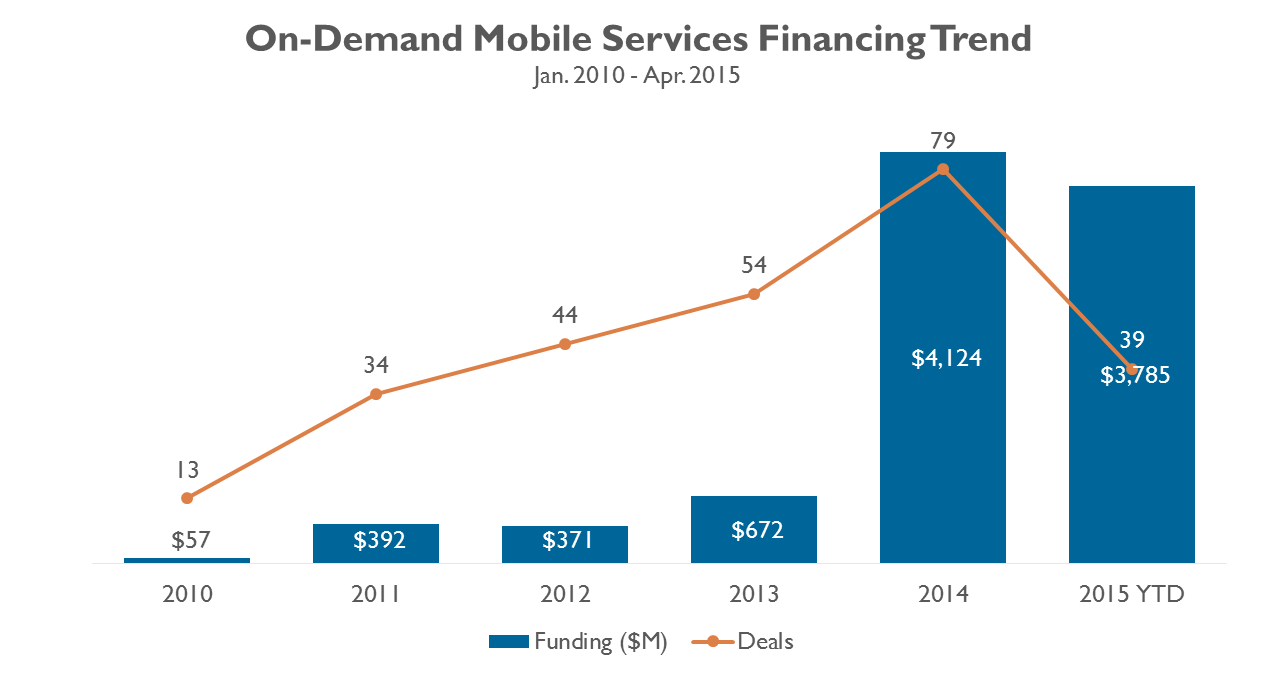 Even without Uber, funding on track to double 2014’s total

Not including Uber’s gargantuan funding rounds, on-demand startups have raised $3.89B across more than 250 deals since the start of 2010. Year over year funding to on-demand startups (minus Uber) rose 316% in 2014 and is on pace for another funding record that could more than double 2014’s total. Huge rounds in the past couple months include deals to Shyp, Sprig, DoorDash and Munchery. 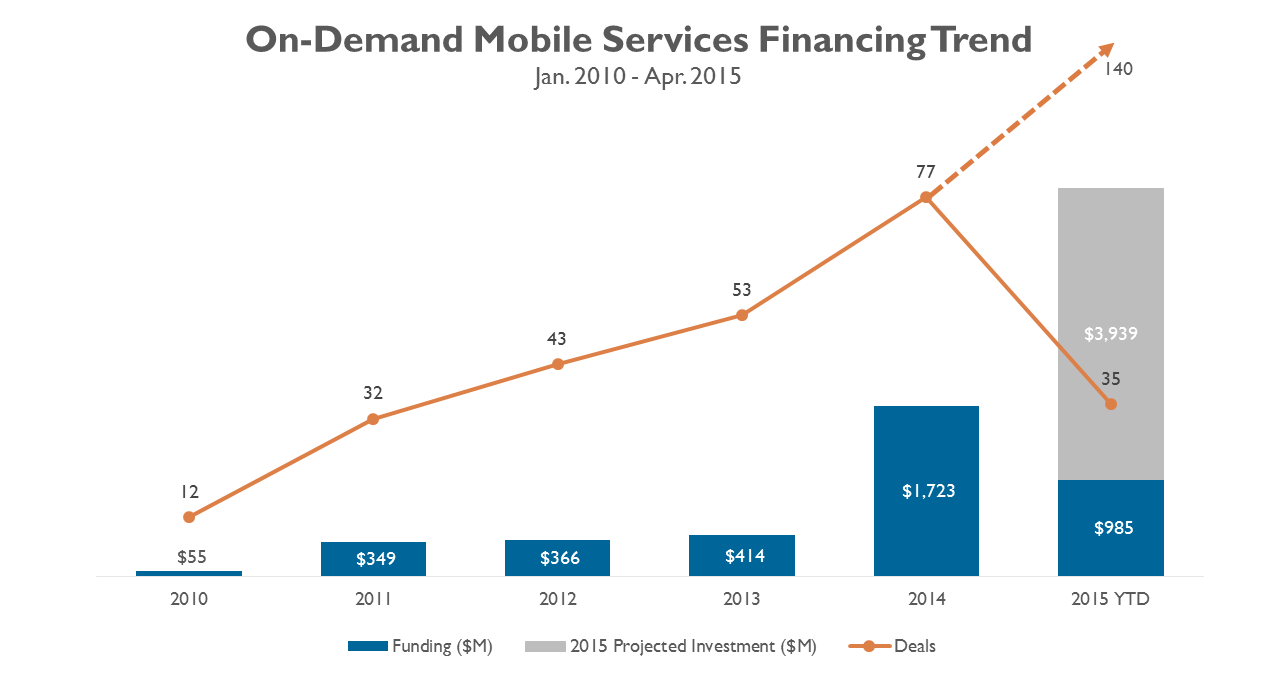 Just how much on-demand funding has gone to Uber?

When it comes to funding, Uber really is a juggernaut. SInce 2010, Uber raised 39% more funding than all other on-demand mobile startups combined in 2014. It has raised a whopping 184% more than on-demand startups in 2015 through April. 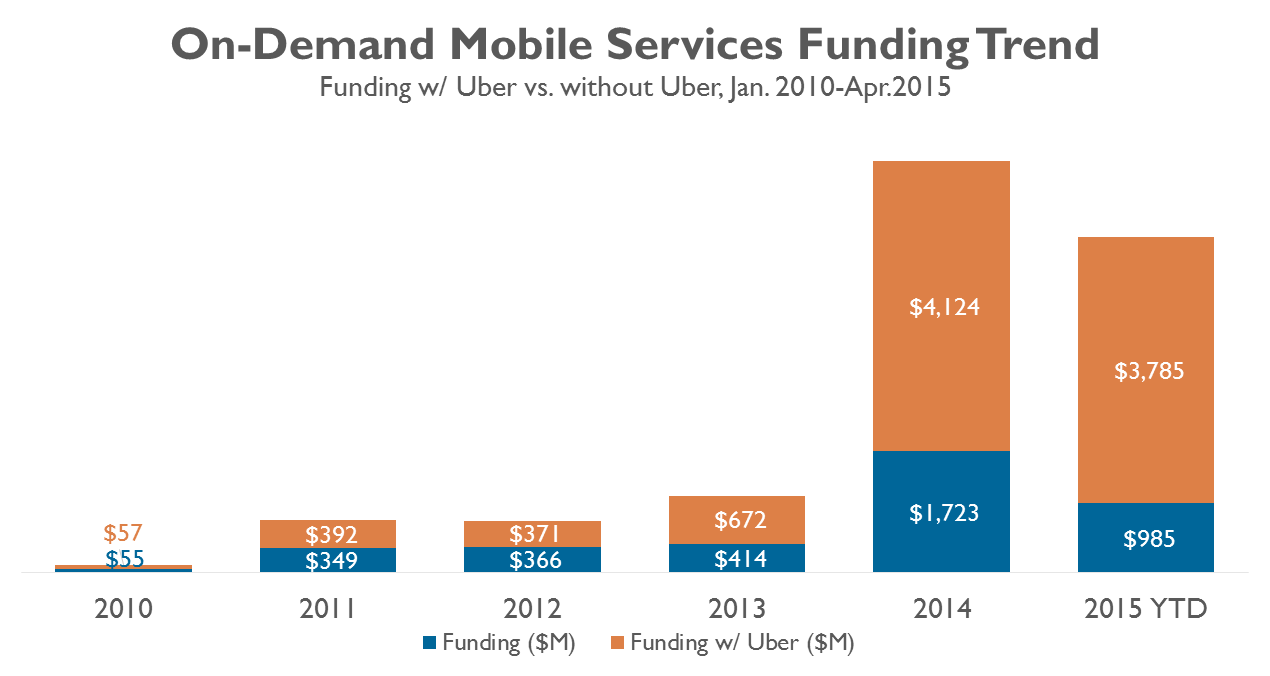 In 2014, seed/angel deal share took 31% of on-demand deals. That’s a huge difference from 2010 when 69% of deals in the on-demand economy were at the seed/angel stage. As more on-demand startups receive follow-on deals, Series B deal share hit a five-year high in 2014 and has taken similar deal share in 2015 YTD. 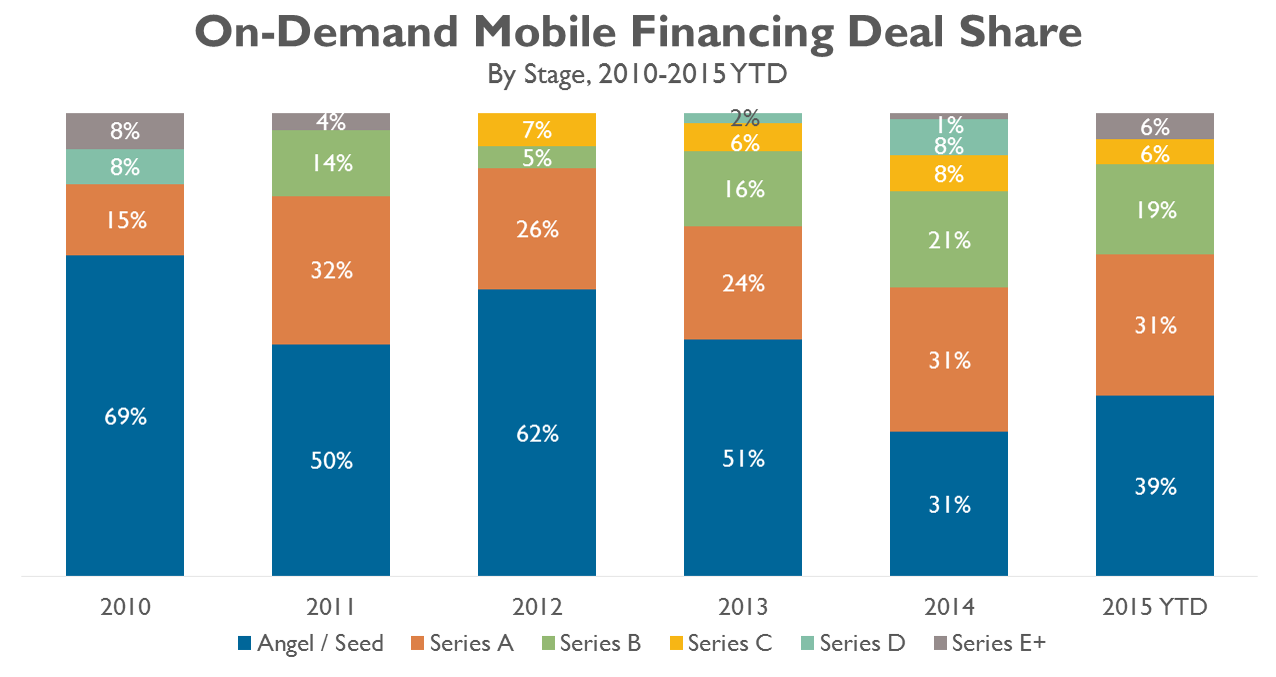 San Francisco has been a testing ground for on-demand apps and it’s not hard to see why. Since 2010, 65% of on-demand mobile financing deals in the U.S. went to California-based startups. New York companies took just under 1/5th of deals. 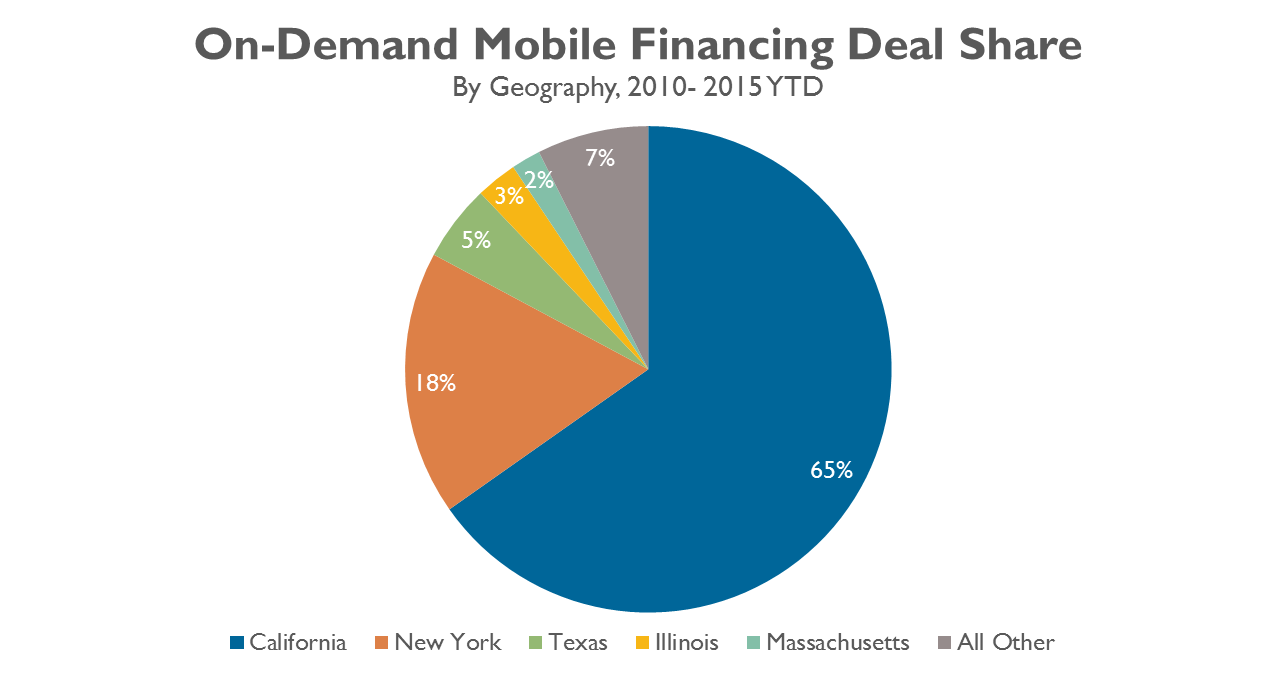 On-demand startups aren’t just raising bigger deals, they’re also raising at a faster velocity. Since the start of 2010, there are over 10 startups that have raised three VC funding rounds (seed VC through Series E+) in the span of 1.5 years or less. 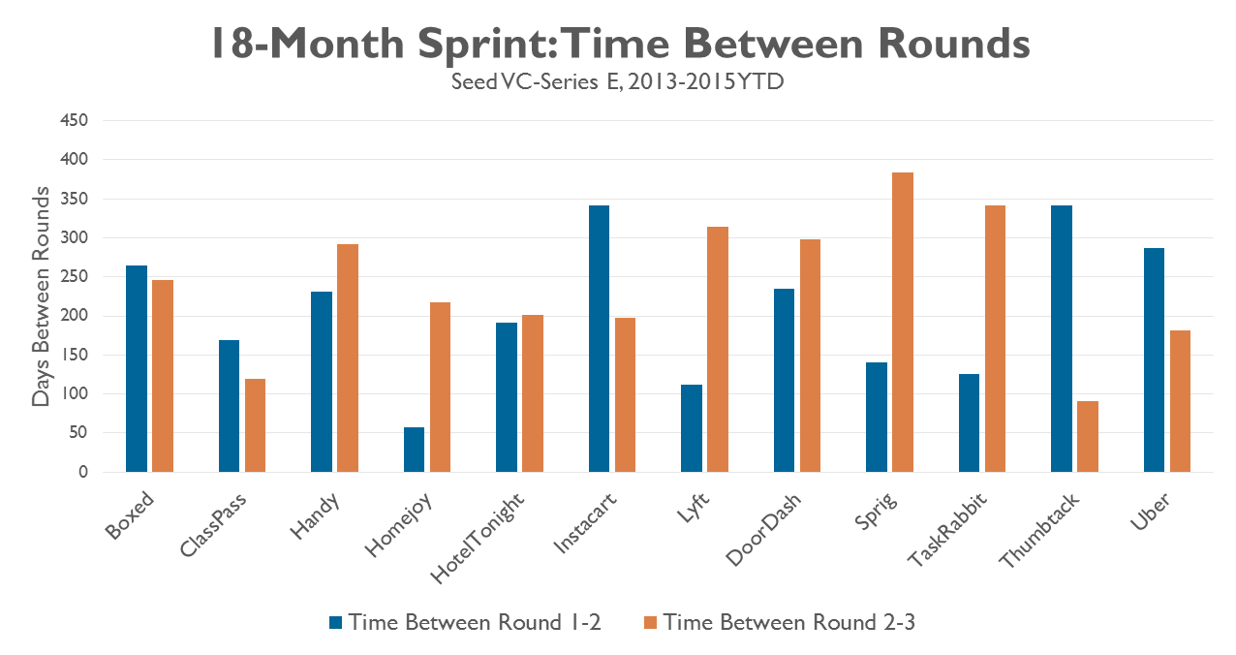 Between 2010 and April 2015, nearly 200 VC investors had invested in an on-demand mobile startup. At the end of 2010, just under 20 investors had done a deal in the space. The business social graph below highlights the explosive investor growth. 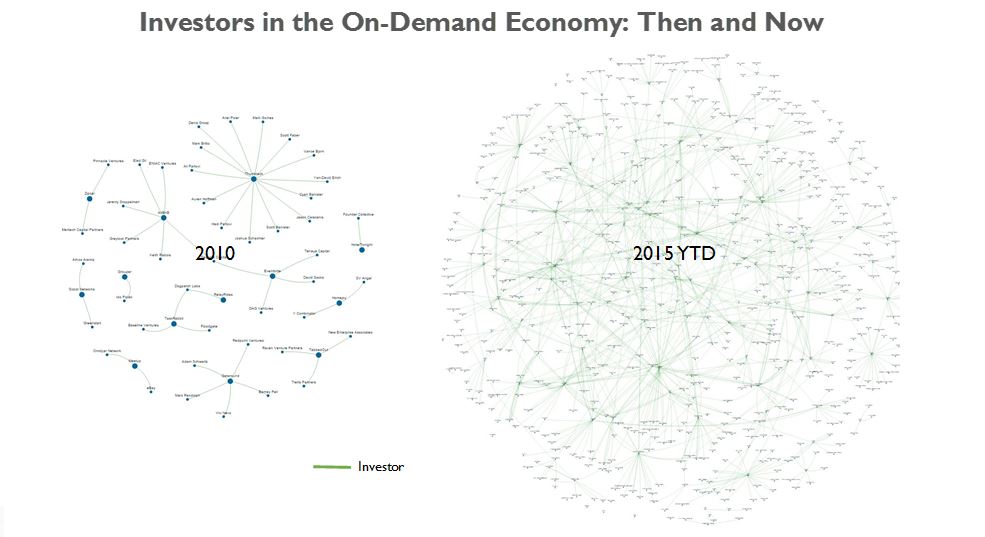 The most active VC investors in the on-demand economy

SV Angel has been the most active VC in on-demand startups over the past five years while Andreessen Horowitz is the second most active. First Round Capital rounded out the top 3. The most active investors in on-demand mobile startups span both micro VC funds including Slow Ventures and CrunchFund to the largest multi-stage VC funds in tech including Greylock Partners, Kleiner Perkins and NEA. 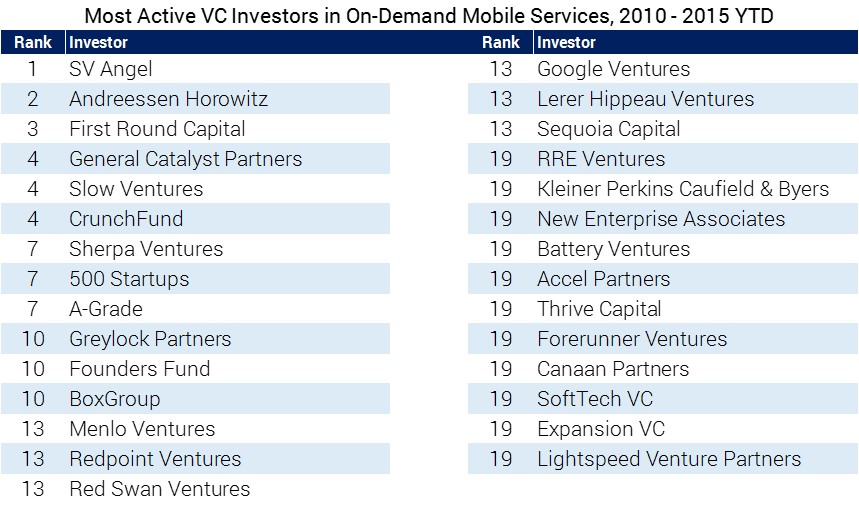 Want more data on on-demand mobile companies? Check out our full On-Demand Report or sign up for our venture capital database below.