Funding to on-demand companies continues to collapse, though there is a bright spot: deals ticked back up in Q1'16.

Excitement around on-demand startups rose to a fever pitch in 2015, as investors bought into the promise of disrupting established players in food delivery, home cleaning, transportation, and many other fields. However, the on-demand space has come under fire recently, with investors casting a more critical eye on the category’s difficult unit economics and narrow margins, especially as the funding environment tightens.

2015 represented a banner year for the on-demand category as a whole, with investors deploying a hefty $17.9B of funding across 244 deals. However, as overall sentiment began to shift towards the close of the year, on-demand funding pulled back sharply. In Q4’15, deals and funding dollars tumbled to their lowest quarterly total since Q3’14.

Q1’16 funding to the category slipped further to $1.3B, falling to a level not seen since on-demand financings first took off in early 2014. However, after plummeting in Q4’15, deal activity ticked back up to 56, though this deal volume remains below the peak levels seem from Q1’15 to Q3’15. 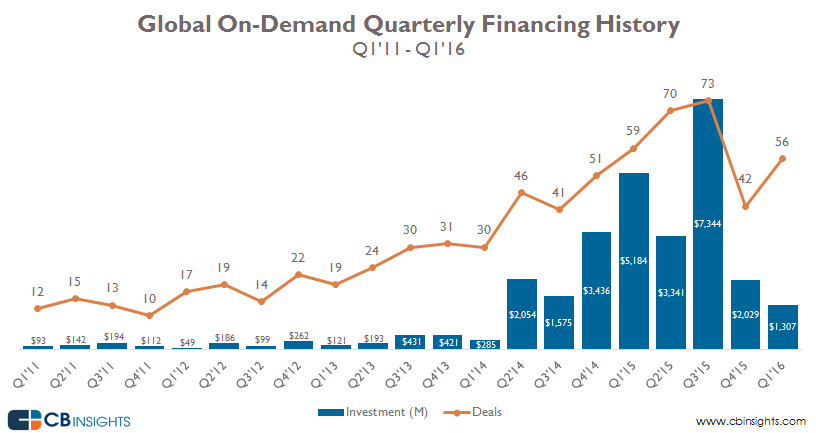 Though overall funding numbers skyrocketed through most of 2015, the three most well-capitalized on-demand companies (Uber, Didi Kuaidi, and AirBnB) accounted for much of this explosive dollar growth.

With several $1B financings from Q1’15 to Q3’15, these juggernauts received a staggering 65% of all on-demand funding during that 9-month period, bankrolling over $10.3B in the three quarters.

Since then, these top 3 companies have been quiet from a fundraising standpoint, and the rest of the on-demand market has seen funding decline for two consecutive quarters.

Even outside of the top 3, the funding picture has been dominated by large deals. For example, in Q1’16, the largest round was General Motors’ January $500M corporate minority investment in Lyft, which accounted for ~45% of the quarterly figure.

The second-largest deal of the quarter went to DoorDash, which saw its share price decline in a $127M Series C round. 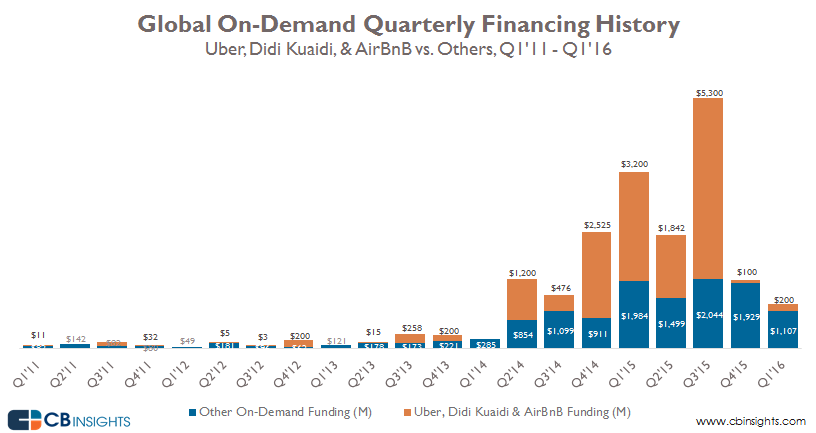