Despite a dramatic funding chill for the on-demand economy at the end of the year, investors poured a record-breaking $17.8B into on-demand startups in 2015.

However, using CB Insights data we see that funding in this category is lopsidedly focused on the three most well-capitalized on-demand companies (Uber, Didi Kuaidi, and AirBnB), who alone captured the majority of funding flowing to the space in 2015.

Excluding the “big three” the rest of the on-demand companies (over 200 in all) received $7.4B in 2015, rising $4.2B on a year-over-year basis. These figures pale in comparison to the big three, who received $10.4B of financings on their own, representing a $6.2B year-over-year increase.

The on-demand juggernauts drew multiple $1B+ funding rounds in 2015, including AirBnB’s $1.5B Series E in June, Didi Kuaidi’s $2B Series F in July, and Uber’s $1.2B private equity round in August.

However, the dearth of such deals in Q4’15 accounts for the steep decline in overall on-demand funding towards year-end. Some notable rounds to companies outside the big three in 2015 include Lyft’s $530M Series E in March, GrabTaxi’s $350M Series E in August, and Deliveroo’s $100M Series D in November. 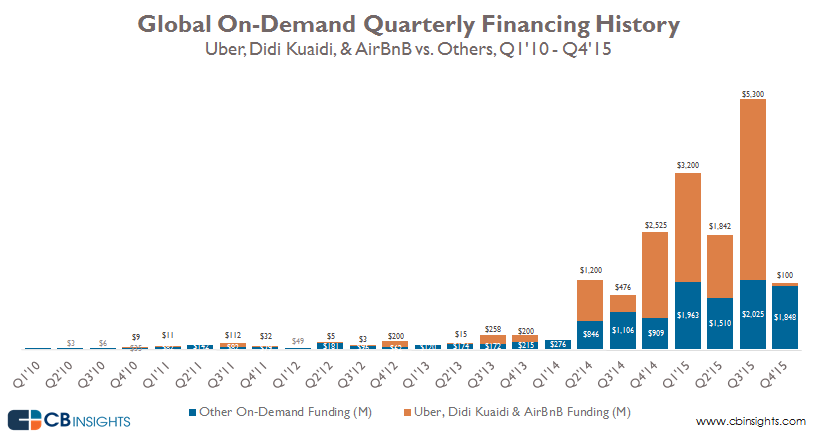