On-demand investment activity continues to decline in Q1'17, even amongst several large deals.

Despite several recent and large deals to companies such as Instacart, Olacabs, and Airbnb, the on-demand category has continued to face strong headwinds in Q1’17 after a sluggish end to 2016.

For the second quarter in a row, both deal and dollar funding activity to the sector has declined. The on-demand sector raised approximately $1.6B over 50 deals in Q1’17, which amounted to the lowest quarter in both funding and deal terms since Q1’14.

In comparison, less than a year ago, on-demand startups raised $6.6B over 72 deals (albeit due to mega-rounds to Uber and Didi Chuxing). That’s a far cry from Q3’15, when the space raised $9.1B across 120 deals, at the height of investor interest into on-demand startups.

Using CB Insights data, we analyzed funding trends from 2012 through Q1’17 in the on-demand space. We define the on-demand category as private companies that aggregate demand on mobile devices and applications, enabling near-instant access to a wide variety of offline services.

Q1’17 represented second quarter of consecutive decline in deal activity, and the third-consecutive quarter of decline in overall funding to the on-demand space. Despite a disappointing level of investor activity in the most recent quarter, several companies such as Instacart, Olacabs, and Airbnb (as mentioned above) raised considerable levels of funding this quarter.

Taking a closer look, Instacart raised $400M  as part of a Series D round in March 2017 from prominent investors such as Sequoia Capital, Andreessen Horowitz, Khosla Ventures, and Y Combinator. The new round increased Instacart’s valuation to $3.42B. This round of funding comes more than two years after the company’s Series C round of funding, in which the startup received $220M at a valuation of $2.11B. With a decline in new entrants, and an increase in consolidation in the food delivery space (among the biggest segments for on-demand), it would not be unusual to see more well-funded players such as Instacart acquire smaller food delivery startups with less funding. 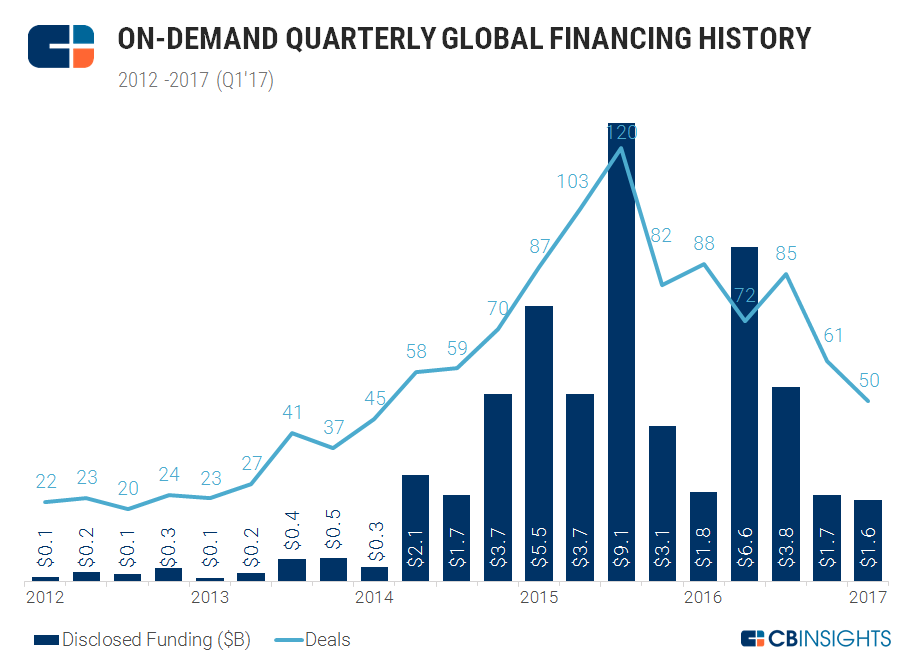 Taking a look at on-demand global deal share by quarter, we can see a general decline of seed and angel deals to the space, decreasing from 49% of all deals in Q1’16 to only 38% of deals in Q1’17. That points to less new entrants entering the space as startups die, and some spaces, like food delivery, see consolidation.

Although the percentage of later-stage deal share (Series D and Series E+) remained stagnant between Q4’16 and Q1’17, we know that later-stage deals comprised the majority of dollar share for the quarter, given the deals to Airbnb, Ola, and Instacart. Interestingly, the proportion of Series A deals in the space increased from 7% of deals in Q4’16, to 20% of deals in Q1’17. Some of the largest Q1’17 Series A deals in the on-demand space included a $27M round of funding to Japan-based food-delivery startup Dely, as well as a $13M round of funding to US-based restaurant reservation platform Resy. 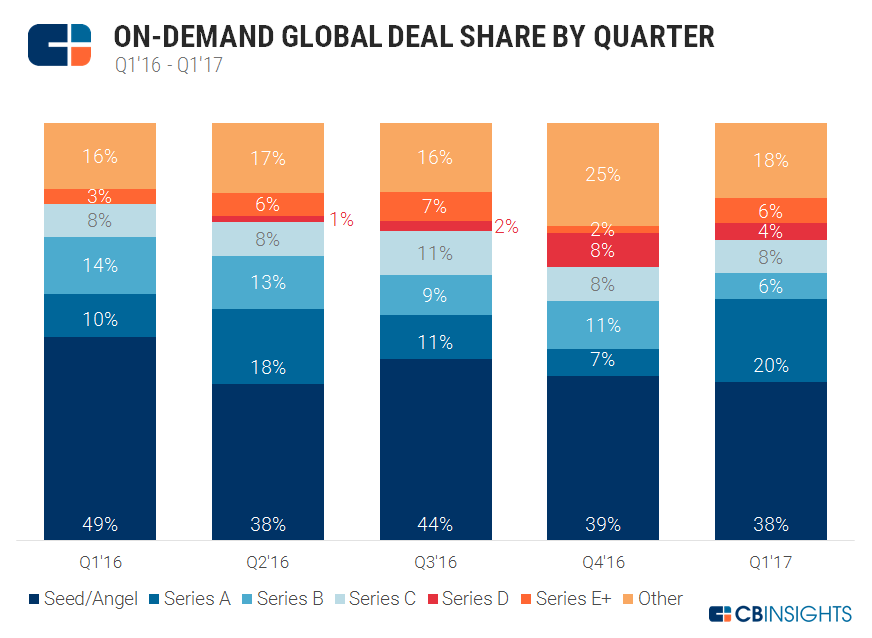 Want more data on the on-demand startup space? Log in to CB Insights or sign up for free below.