As prominent on-demand startups like Postmates seek fresh financings, a look at how fast on-demand valuations have grown.

This year, a host of high-profile on-demand startups have made headlines as they sought fresh rounds of funding, including:

Given the spate of news, we took a look at CB Insights’ valuation data to examine where valuations stand for US-based on-demand companies, and some of the largest valuation step-ups in the space (excluding Uber and Airbnb) during the funding boom of 2015.

Many of these valuations were not publicly disclosed and were uncovered by digging into state filings, a new feature on the CB Insights platform. These filings include franchise tax statements, certificates of incorporations, annual reports, LOENs, EPENs, etc.

This data, along with the associated filings, is currently available on CB Insights to Expert level plan subscribers.

According to the CB Insights Trends tool, which mines millions of media articles to track tech trends, buzz surrounding the on-demand economy began picking up in the middle of 2014 before hitting an apex in August of 2015. Media interest in the on-demand economy rebounded in March, but has seen a decline since. 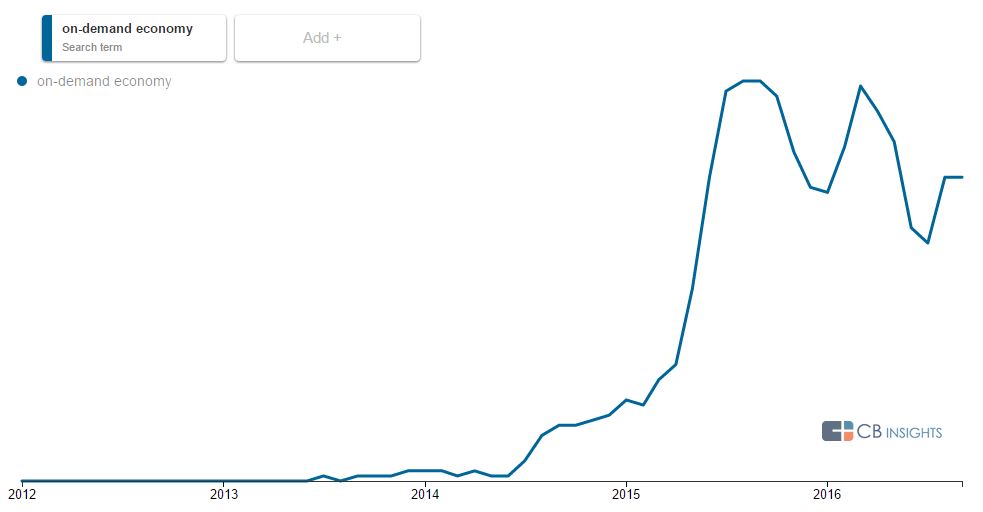 The pattern of chatter around the ”on-demand economy,” with its big run-up in 2015, corresponds with funding trends in the space, which saw dollars peak in Q2’15 at nearly $9B across more than 100 deals globally. Funding to on-demand startups excluding Uber, Didi Chuxing, and Airbnb rebounded 53% on a quarterly basis in Q3’16 to hit $2.16B. 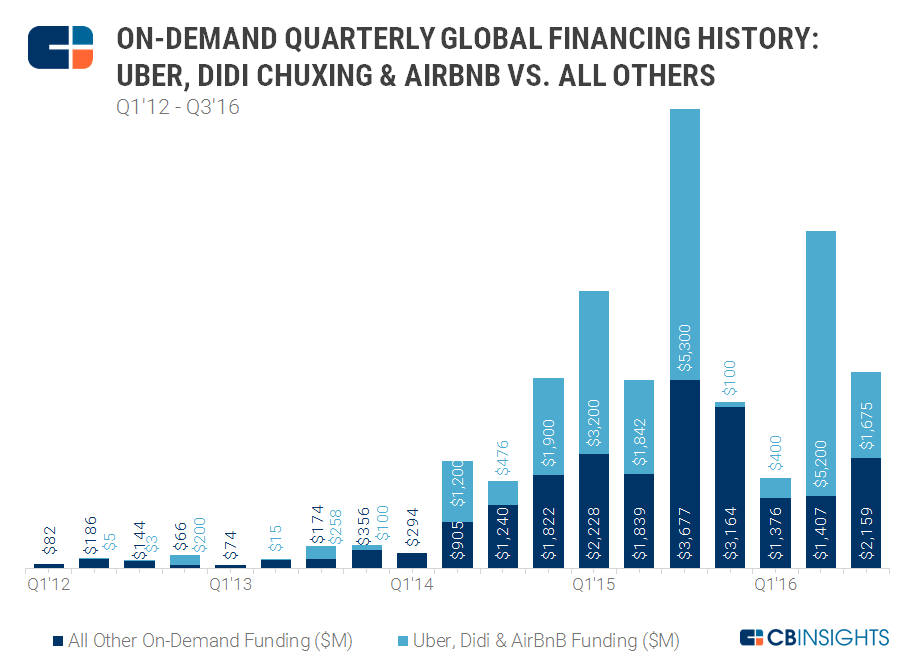 A look at valuations in the on-demand economy

While the on-demand economy is made up of a host of different mobile-focused, services marketplaces in areas ranging from valet parking to food delivery to home cleaning, Uber and Airbnb are the juggernauts when it comes to valuations (and fundraising). The chart below highlights the latest round valuations of 12 different US-based on-demand startups, including these two on-demand category leaders. 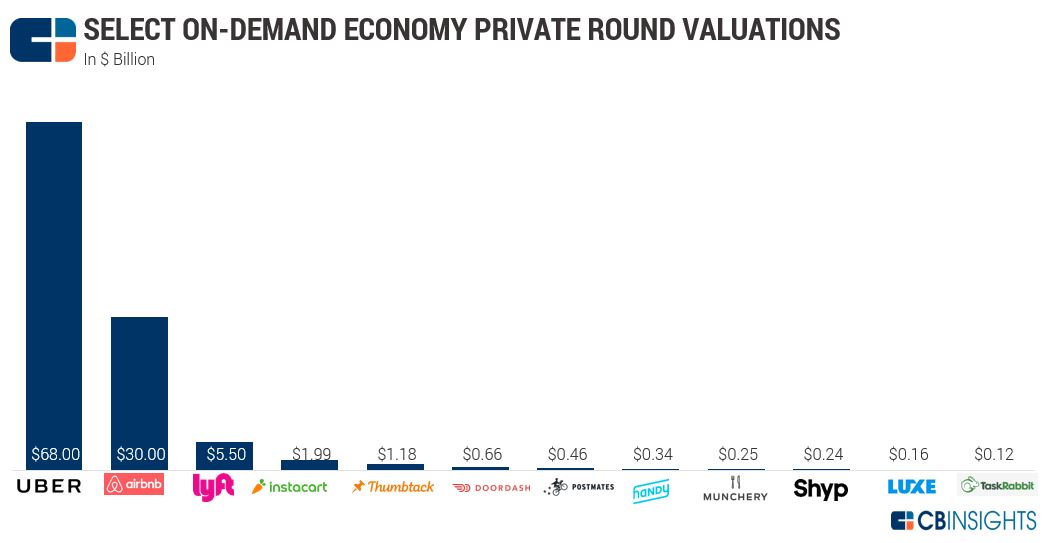 Uber and Aibnb are on a different scale. Separating Uber, Airbnb, and the 10 other on-demand startups listed above, we see the valuation of Uber and Airbnb currently stands at over 6x and 2.5x higher than the other 10 companies combined. We previously highlighted a similar power law dynamic among unicorns overall.

Here’s how the other 10 on-demand startups’ valuations look compared against one another. 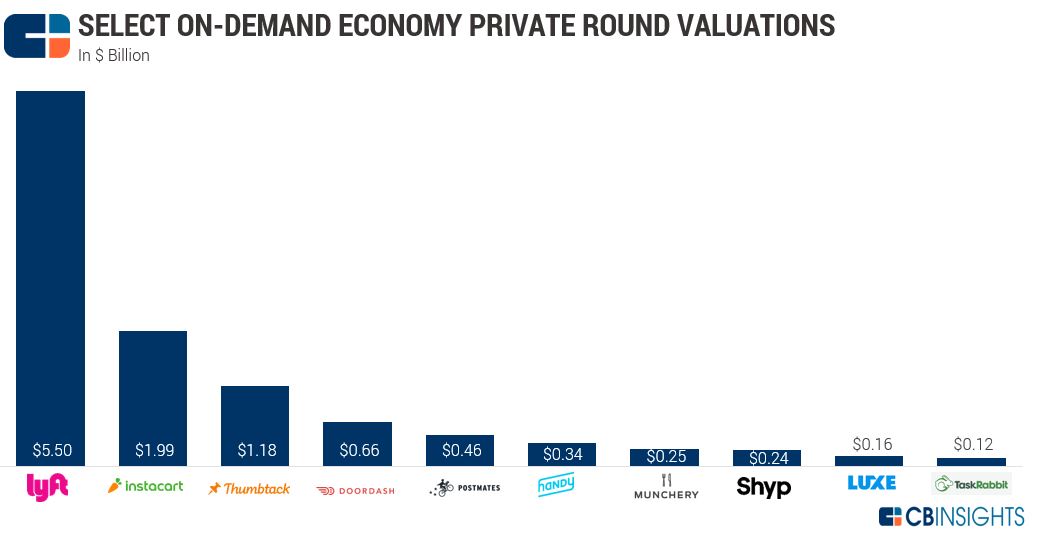 A look at valuation step-ups

Another way to look at these companies is not only their current valuations, but how fast those valuations have grown. Looking at valuation data over the past couple years, we analyzed some of the largest valuation step-ups in the on-demand economy during the investment boom in 2015.

Valuation step-up: From seed to Series B rounds, Shyp’s valuation rose 3883% or 40x. 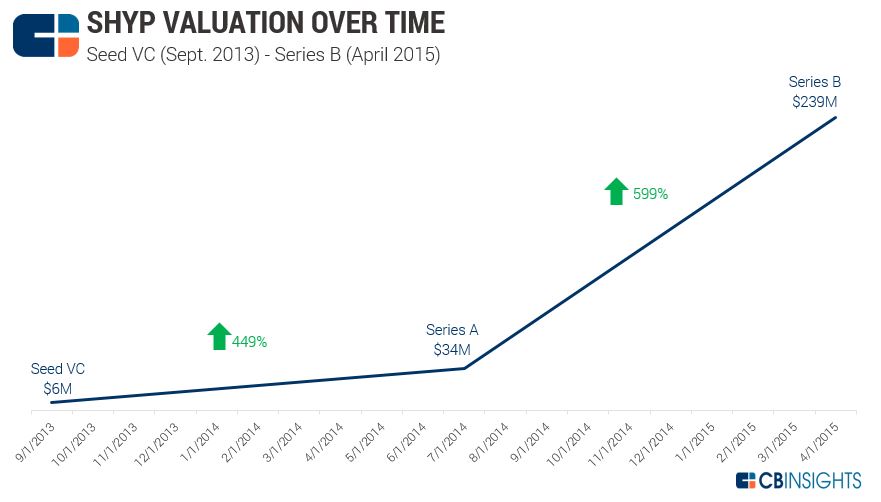 Shyp, which provides an on-demand shipping service, saw a rapid rise in valuation between its 2014 Series A and its $50M Series B in April 2015 led by Kleiner Perkins Caufield & Byers. Within that nine-month span, Shyp’s valuation rose 7x. In October 2016, Shyp launched a new tool that allows online businesses to compare carrier shipping rates and print labels at home, as it looks to shift its focus from consumers to online merchants. 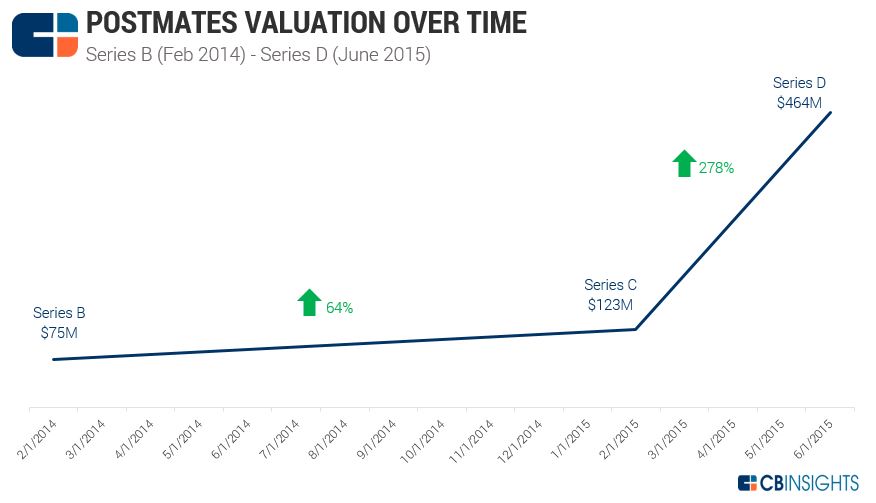 Postmates saw a particularly notable valuation step-up in 2015, rising over 2.75x from its Series C in February of last year to its $80M Series D led by Tiger Global Management in June 2015. As mentioned above, Postmates has reportedly been in talks since last month to raise a Series E round of at least $100M at a valuation nearly at par with its Series D valuation. 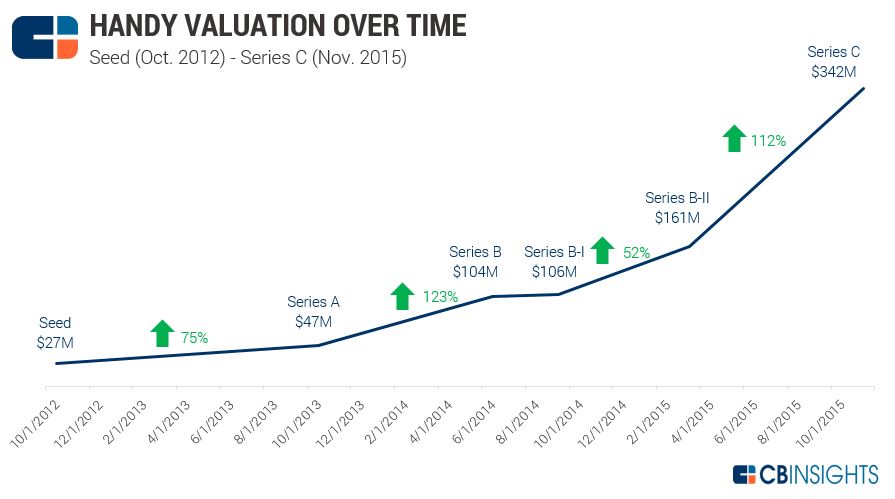 Handy, an on-demand marketplace for booking household service providers launched in 2012, also saw a valuation increase of over 100% in 2015 during its $50M Series C round led by Fidelity Investments last November, despite being plagued by a number of payments and service complaints. While the media largely pegged its last round valuation around $500M, CB Insights data shows a post-money valuation of $342M. At the time, Handy was operating in 28 US cities and 3 internationally. 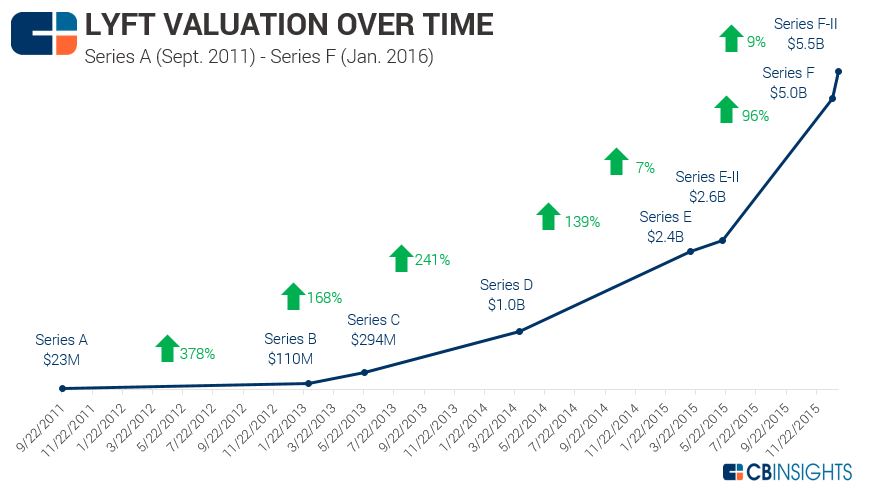 Looking back at Lyft‘s valuation over time, we see that the ride-hailing app saw a 139% increase in valuation between its April 2014 and March 2015 rounds and another 100%+ increase in valuation between its Series E and Series F rounds, the latter of which was announced in December 2015. Lyft’s valuation grew 9% from $5B to $5.5B in its most recent $500M strategic investment from General Motors. In June, Lyft reportedly hired Qatalyst Partners, the Frank Quattrone-founded investment bank known for its role in technology M&A, prompting speculation that the ride-hailing company was gauging acquirer interest in the ride-hailing company.

While a number of startups in the on-demand economy saw significant valuation step-ups in 2014 and 2015, we’ve also seen a wave of consolidation in certain overcrowded segments including food delivery, as well as some downrounds. A snapshot of DoorDash’s financing history from the CB Insights database gives us a view into some of the terms and deal numbers in the company’s latest $127M Series C financing. In total, DoorDash has raised $186.7M from many notable investors including Sequoia Capital, Kleiner Perkins, and Khosla Ventures as it expands its food delivery service nationally.

In DoorDash’s case, though, we see its price per share fell 16% to $23.94, but retained a 1x liquidation multiple between its Series B and Series C rounds (even though the valuation increased from $604M to $659M). In spite of that, DoorDash did reportedly give its investors the ability to block a potential IPO if the company can’t at least triple their money from the latest round price. 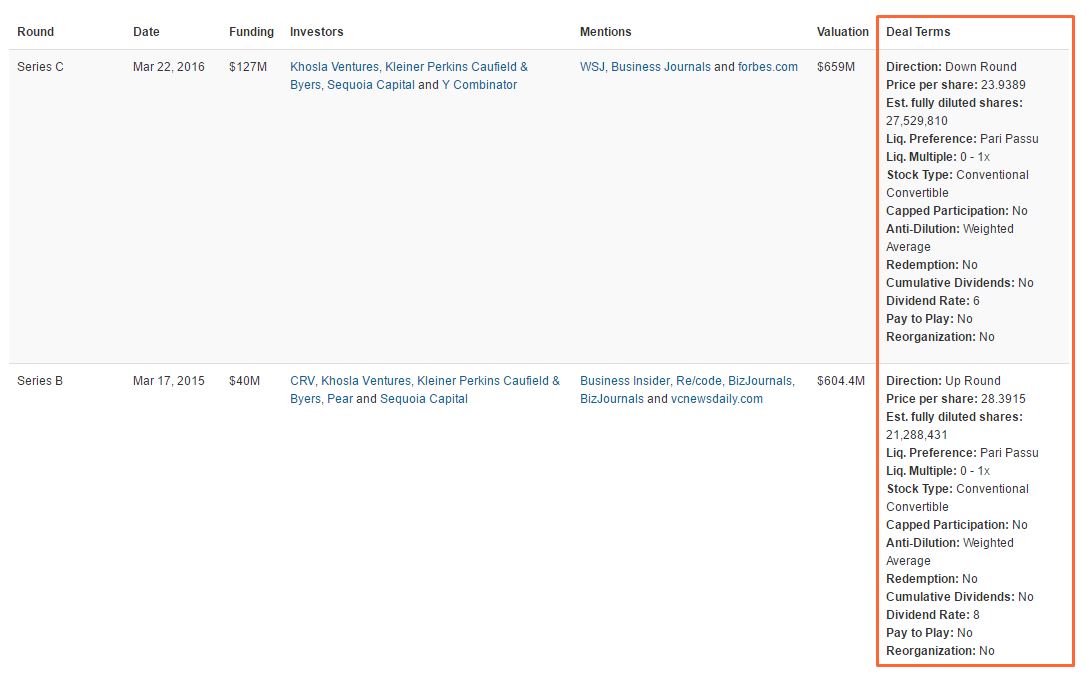