Research Brief
2136
Mega-rounds have previously dominated funding to oil and gas tech companies. But in 2015, funding looks to top $120M across a range of smaller deals.

Tech has proliferated into a slew of asset-heavy industries as of late, and the oil and gas industry is no different.

Since 2012, oil and gas tech startups have seen over 100 equity financings raising a total of $782M.

Oil and gas tech is defined as any tech company serving these industries. This includes companies like Tachyus, an oil data startup which raised $13M in Series A financing from Founders Fund in June 2015; and Seven Lakes Technologies, an analytics and business-process management tool for upstream oil and gas, which raised $20M from Carrick Capital Partners in February 2015.

Overall deal activity has remained relatively range-bound in the space, with 34 deals in each of the past two years. While the overall funding trend shows 2015 to be on pace for a slowdown, the annual numbers are somewhat skewed by a few large rounds in each of the past few years.

In 2012, DrillingInfo raised $165M in private equity financing, while in 2014 Surveying and Mapping raised $122.5M. If these two large financings are excluded, funding totals fall to below $131M in both years, putting 2015 on pace to top those funding figures despite the largest round being the $20M financing to Seven Lakes.

See below for the full trend. 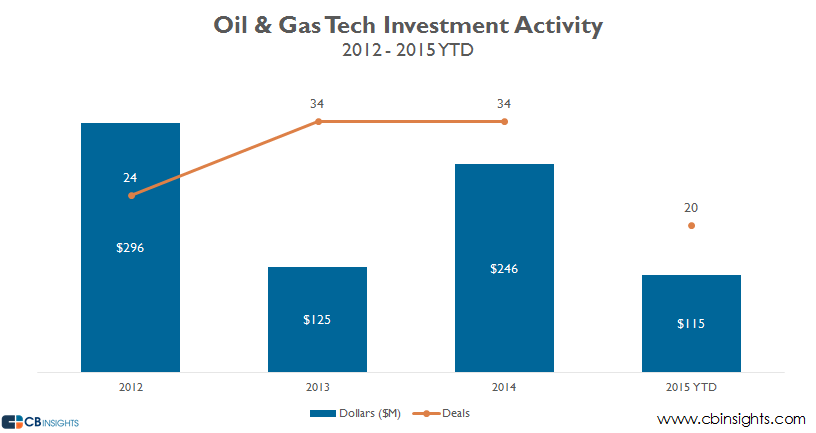 Want more oil and gas tech data? Login to CB Insights or sign up for free below.