Research Brief
2443
There were also no IPOs in Q3'15 and Q4'15. Despite this, there has been one New York-based, VC-backed tech exit at a $1B+ valuation in each of the past three years.

Overall in 2015, New York investor-backed tech companies saw record highs in funding, reaching $7B in equity funding for the year. But the year ended with a whimper: funding dropped 35% in Q4’15 on a quarterly basis. And exits also fared poorly in Q4’15: there were only 8 VC-backed tech exits.

New York-based investor-backed tech companies received more than $1B in funding in 6 of the last 7 quarters. But the 2015 results were largely driven by outstanding quarters in Q2’15 and Q3’15. The spike in Q3’15 is partially attributable to three $100M+ mega-deals, including a $275M Series E in FanDuel, $200M corporate minority in Buzzfeed, and $130M Series D in ZocDoc. 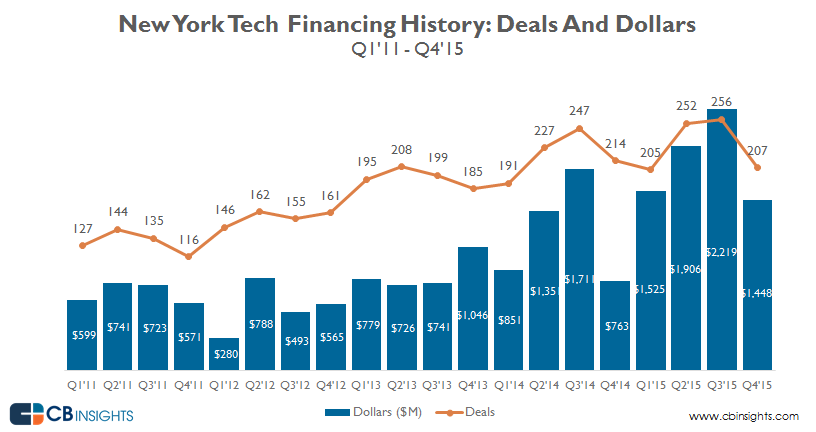 New York tech exit activity trended sharply downwards through Q4’15, with just 8 VC-backed exits realized, the lowest total for quarterly exits since at least Q1’11. Q4’15 exits are down almost half when compared to Q3’15, which had 15 exits. 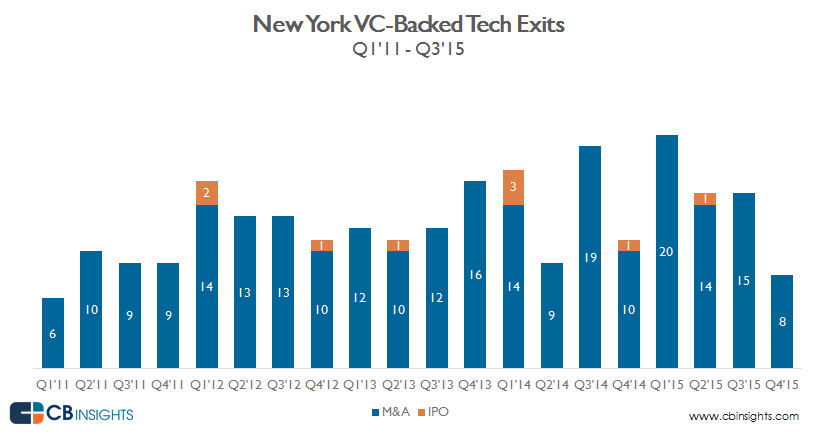 There has been at least one New York-based, VC-backed tech exit at a $1B+ valuation in each of the past three years. However, with prominent New York startups Gilt Groupe and several others recently exiting for fractions of their valuations, its unclear if this at least $1B+ exit/per year trend will continue.

Want more NY data? Login to CB Insights, or sign up for free below.