Research Brief
1584
Johnson & Johnson and Novartis are prominent corporate healthcare investors. How does their investment and exit activity stack up?

Johnson & Johnson and Novartis have well-established corporate venture groups that have been investing in a range biotechnology, pharma, devices and digital health companies over time. We used CB Insights data to analyze the activity of both corporate venture funds since 2010 to see how they stack up.

With the exception of 2011, Novartis been a more active investor and saw a large activity increase in 2014. Compared to 2013, Novartis saw a large yoy increase in deals and more than doubled the number of deals that J&J was involved with in 2014. Overall, Novartis has made 26% more deals than J & J since 2010. 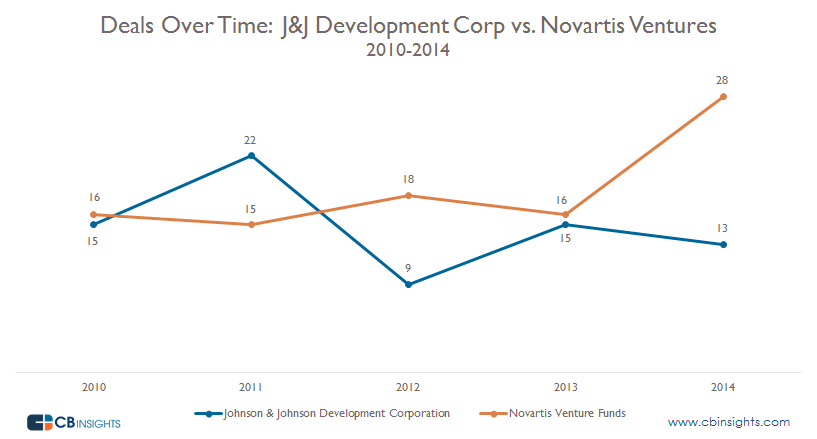 Both venture arms have been neck in neck in terms of exit activity with the exception of 2013 where Johnson & Johnson saw 6 exits including Bluebird Bio and Syntaxin. However, both firms saw good exit activity in the last year, with a combined 15 exits. This makes sense given that 2014 was also a strong year for venture capital healthcare exits. 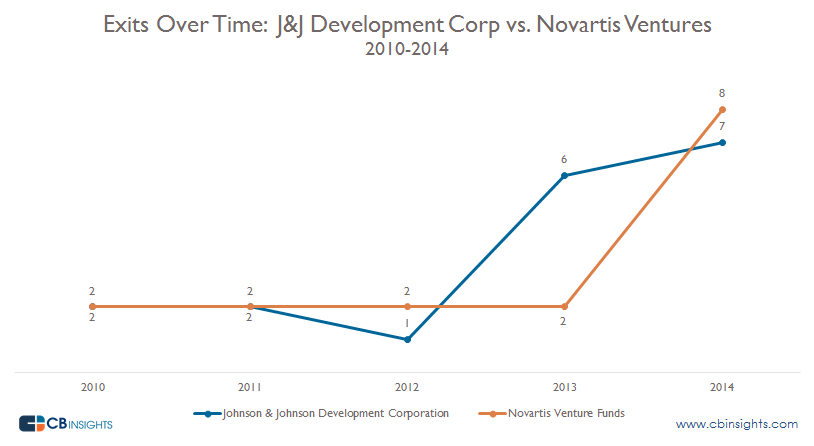 While the majority of exits were acquisitions without disclosed valuations, the Novartis portfolio has fared relatively better than J&J’s corporate venture capital unit when comparing exit valuations. Overall, the top 3 exits in Novartis’ portfolio had an aggregate value of $3B+ compared to J&J which was near $1.2B. Novartis is also an investor in Proteus Digital Health, which is expected to IPO in the near future and currently valued above $1 billion.

Want to track the investment and exit activity of healthcare’s corporate VC investors? Check out the CB Insights’ venture capital database by creating a free account below.