While some retailers have been hurt by e-commerce, Nordstrom has leapt in. We looked at the retailer's partnerships, investments, and acquisitions.

In 1998 Nordstrom launched Nordstrom.com in an effort to expand into the physical goods e-commerce space. Fast-forward 17 years and the high-end retailer has continued to innovate and invest in its e-commerce strategy through a variety of investments, acquisitions, and partnerships. Let’s take a look.

In 2009 Nordstrom made the move to integrate their e-commerce and store inventory systems so that those shopping online could see what was available in a given store, and vice-versa. Jamie Nordstrom, president of stores, noted the advantages when he said:

We can sell more without having to buy more inventory. That plays through to margins and, ultimately, earnings.

Starting in 2011, Nordstrom has made multiple investments and acquisitions in the physical goods e-commerce space. On the acquisition side, Nordstrom acquired HauteLook, a flash sales website, for $270M in February 2011, as well as more recently Trunk Club, a company which offers a curated selection of casual clothing via mail, for $350M in August 2014. Both of these acquisitions show Nordstrom’s willingness to adapt to changing consumer behavior. This was exhibited when Blake Nordstrom, Co-President of Nordstrom said this:

While our focus on providing a superior in-store shopping experience is our roots, continuing to find ways to use technology to serve customers the way they want to be served is critical. This partnership gives Nordstrom and HauteLook shared growth opportunities as online shopping evolves. 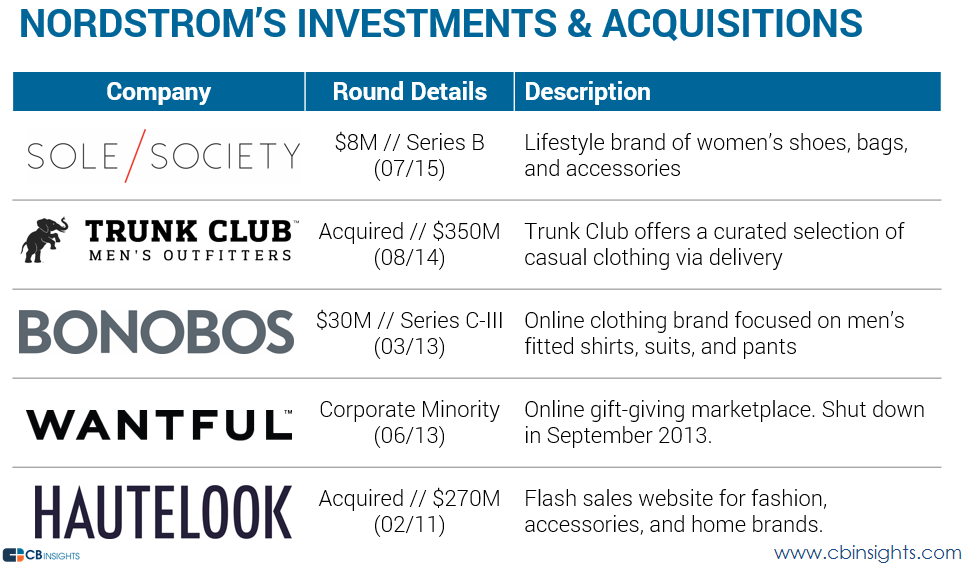 In addition to investments, Nordstrom has struck up multiple partnerships with startups and other brands. Most recently the company agreed to a “pop-in” test with Warby Parker, which allows the glasses brand to sell select frames in Nordstrom. The company has also previously partnered with Madewell (a brand owned by J.Crew), Baublebar, Wanelo, Etsy, and Bonobos, all in similar deals to integrate these product offerings in-store, in some cases enabling online-only brands to establish physical distribution in mass retail. The timeline of these partnerships is featured below. 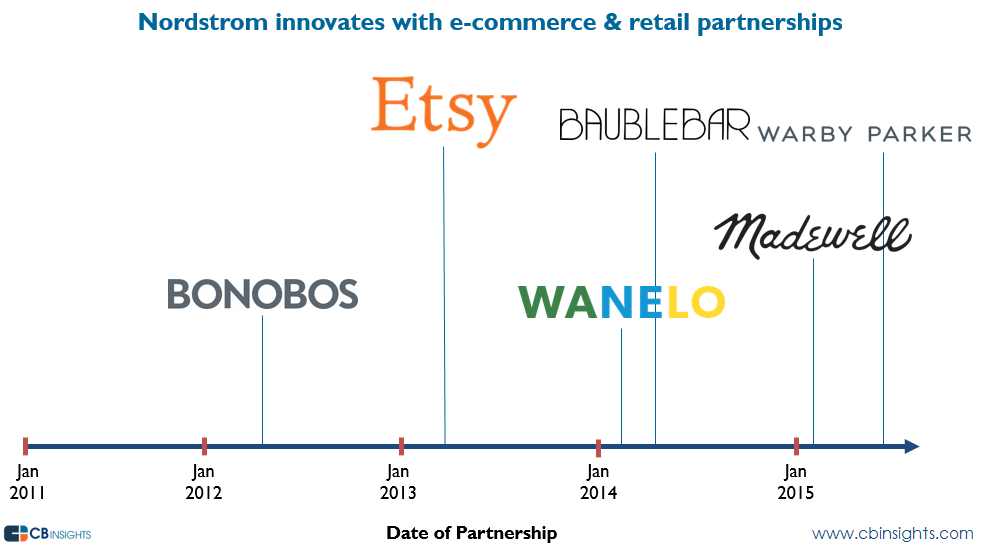 Want more data around Nordstrom’s strategy and physical goods e-commerce? Check out our e-commerce webinar, login to CB Insights, or sign up for free below.