Record funding and the rise of remote work have put a number of US cities on the VC map. While reports of Silicon Valley’s demise are exaggerated, these cities are actively courting the region’s tech talent and smart money.

Silicon Valley is still the startup capital of the US by a mile.

The region had a mammoth funding year in 2021, doubling year-over-year to top $106B. And in Q1’22, despite a funding decline of 2% quarter-over-quarter (QoQ), the region’s share of total US funding grew 9 percentage points to 41%.

However, Silicon Valley has a sky-high cost of living and an ultra-competitive environment among startups vying for VCs’ attention. Buoyed by the rise of remote work, many in tech are leaving in favor of cheaper, less competitive cities.

In particular, Sun Belt cities have beckoned a wide range of tech workers, founders, and investors. For instance, compared to California, Florida and Texas have no income tax — a boon for workers — and a cheaper cost of living. The pandemic also drove many residents out of densely populated urban centers toward smaller, midsize ones.

Below, we explore investment trends in 3 up-and-coming tech hubs — Austin, Miami, and Dallas — that have seen some of the strongest levels of funding and population growth in recent years. 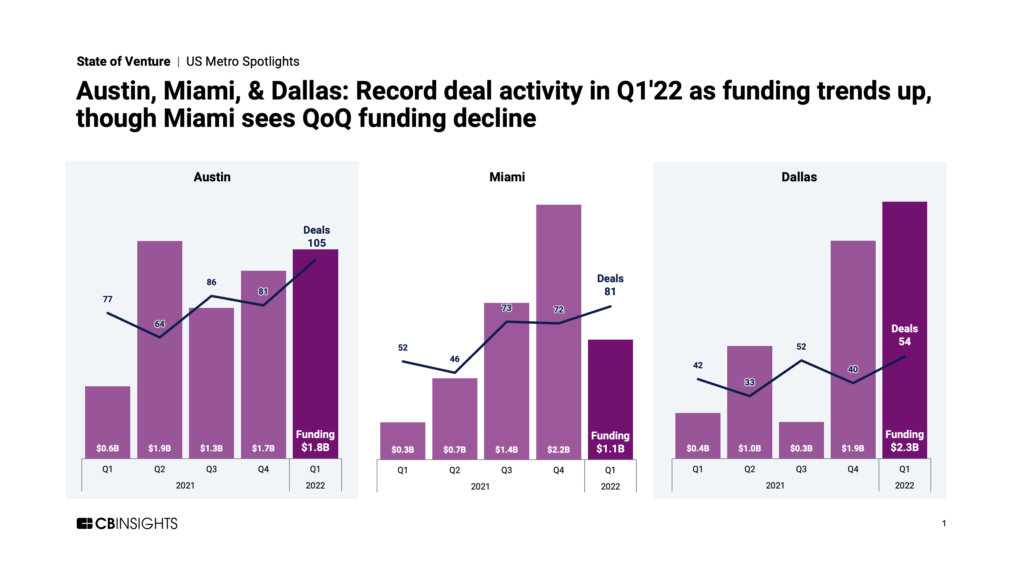 Austin is on a roll.

Austin is now the fastest-growing major metro area in the US, with an estimated 184 new residents each day. Austin’s tech scene is also growing at a rapid clip: From May 2020 to April 2021, Austin gained tech workers at a higher rate than any other US metro by far, according to LinkedIn data.

Many of these workers are coming straight from Silicon Valley, discouraged by the area’s high taxes and cost of living. According to a Bloomberg analysis of USPS data, during the pandemic, more of Austin’s new residents moved from San Francisco than from anywhere else outside of Texas.

Top tech companies are also moving: Tesla and Oracle both relocated their headquarters from Silicon Valley to Austin during the pandemic.

As Austin’s tech scene has developed, the city has seen significant funding growth. Funding more than tripled QoQ in Q2’21, and has since held at $1B+ levels every quarter — it even grew in Q1’22 despite the venture market’s downturn. 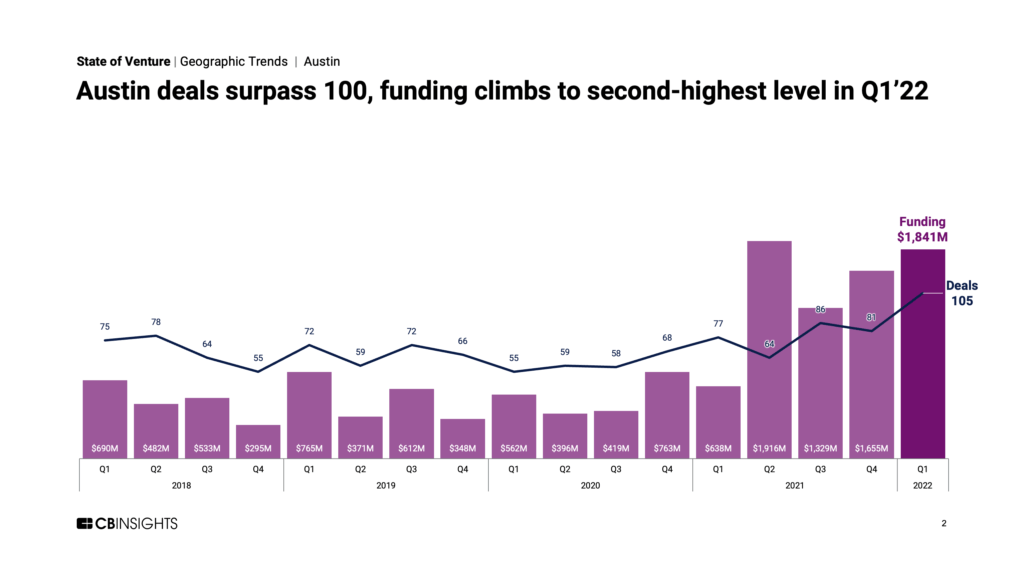 Austin’s tech scene represents a range of sectors. For instance, while some of the largest rounds in Q1’22 went to smart city and infrastructure startups — including parking software firm FLASH and 3D-printed building developer ICON 3D — the city is also home to digital health unicorns such as Wheel, Everly Health, and Iodine Software.

Funding and investor highlights in Austin:

Investors are also looking to Miami as the next big US tech hub. These include Founders Fund general partner Keith Rabois, as well as Blumberg Capital’s David Blumberg, whose reasons for moving include the ease of being “on the phone to Israel and New York without any time zone-related problems” and the city’s proximity to Latin America for deal-making.

Meanwhile, in January 2021, Japan’s SoftBank Group pledged to invest $100M in tech startups in the region — only to blow past this goal, investing over $250M within 9 months of the announcement.

After a bonkers Q4’21, funding to Miami-based startups fell 50% in Q1’22 to $1.1B. However, deals ticked up to a new high of 81 from a record 149 disclosed investors, signaling broad and growing interest in startups in the region. 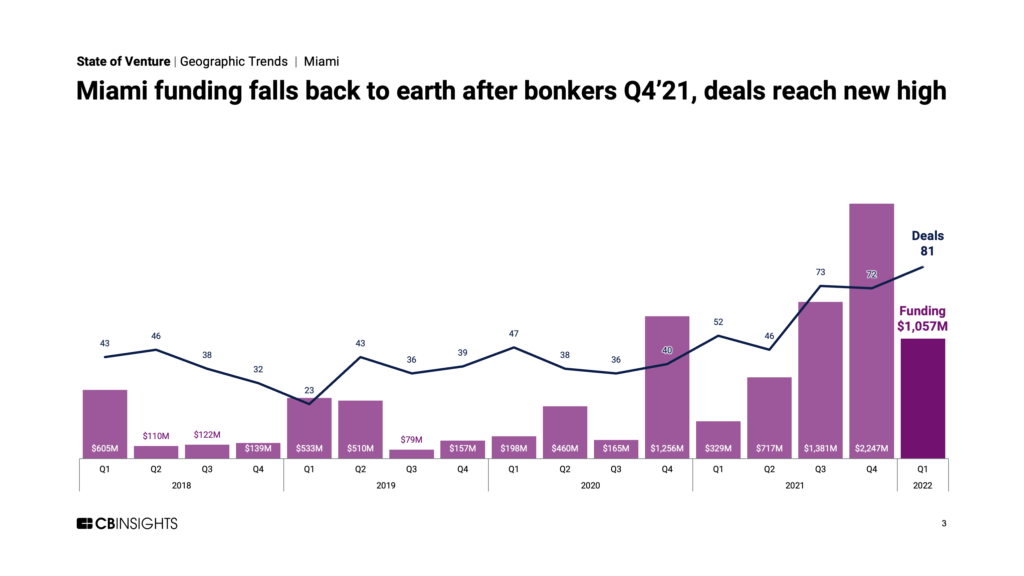 Blockchain tech has become an increasing focus in Miami, which has hosted the international Bitcoin Conference for 2 years running. Blockchain.com recently moved its US headquarters to the city, while eToro opened a US hub there. Mayor Francis Suarez has vocally supported the influx of crypto business.

In Q1’22, Miami took the #4 spot — after New York, Silicon Valley, and LA — for blockchain & crypto funding, with over $500M. Despite representing just 1.5% of all US venture funding in the quarter, the city accounted for nearly 9% of all US blockchain funding.

Funding and investor highlights in Miami:

Dallas’ tech scene has been quietly — but rapidly — growing. Investors, founders, and big tech companies have not been as vocal about the city as Austin or Miami, but the numbers speak for themselves.

Like Austin, Dallas was one of just 4 US metros to see funding grow QoQ in Q1’22, amid a pullback across venture as a whole.

Dallas’ tech workforce is also growing: It’s now the #3 metro area in the country, after NYC and LA, for number of tech job openings. 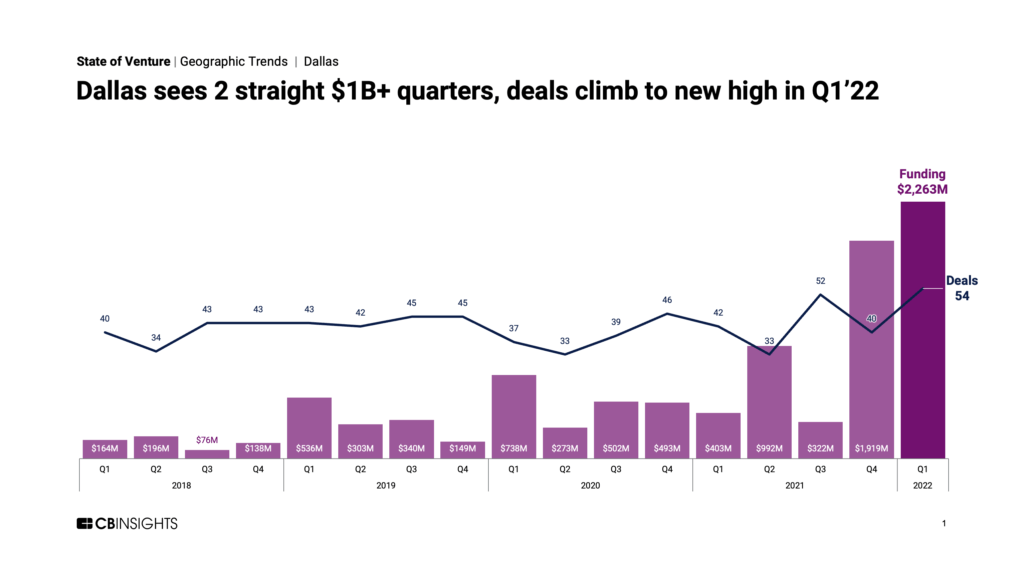 Funding and investor highlights in Dallas:

For more insights on the top regions, startups, and investors in VC, download the full State of Venture Q1’22 Report.