Research Brief
2132
Ozy, Refinery29, Business Insider, Vox, and Buzzfeed are among the news and media startups valued over $100M.

Venture capital and strategic investors ranging from Comcast to Time Warner to Bertelsmann poured nearly $800M into digital news and media startups last year. The huge fundings are leading to some very robust valuations in the content business.

Notably, Buzzfeed and Vox Media each took investments of $200M from NBC Universal earlier this year, placing them in the now 139-member strong unicorn club. Now, Axel Springer has acquired Business Insider, valuing the company at $442M just 7 years after launch. It’s all a far cry from when Buzzfeed CEO Jonah Perretti once complained:

Tech companies won’t hire reporters, most VCs won’t fund companies that employ them, and both say tech is the key to saving journalism. Ha!

Using CB Insights valuation data, we compiled the recent M&A valuations of old-guard media companies (the FT, The Economist, Boston Globe, Forbes, and The Washington Post) compared with the valuations of some of the most valuable digital news and media startups today. Other less publicized notable acquisitions of verticalized digital business news sites include McGraw-Hill’s $2.23B acquisition of SNL Financial and BC Partners’ buyout of Mergermarket from Pearson for $624M in 2013.

Of note, Business Insider’s rumored sale price would be a 121% step-up from its valuation in its January 2015 financing round led by Axel Springer and 77% larger than the price paid by Amazon’s Jeff Bezos for The Washington Post. Other startups in the digital news and media realm valued at $100M or more include Refinery29 and Ozy Media (Ozy is also backed by Axel Springer). 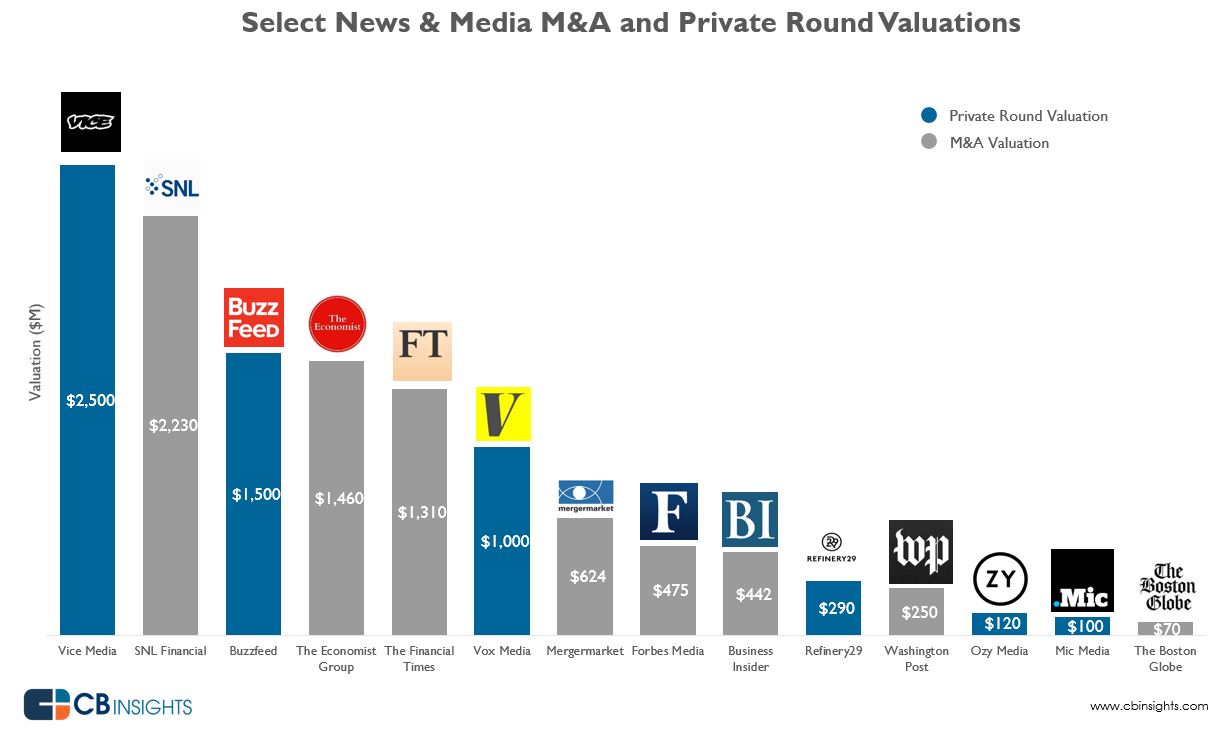