New York and Massachusetts are known as the two top tech hubs in the eastern United States, and have each produced unicorn companies and well-known exits like Etsy (New York), OnDeck Capital (New York), Wayfair (Massachusetts) and many more.

Massachusetts has on some quarters eclipsed New York for funding VC-backed companies (Q4’14 and Q1’15 were cases in point). We used CB Insights data to see the trend for all equity funding to private tech companies

When looking at tech, the data shows that New York has consistently eclipsed Massachusetts funding and deal count figures by a significant margin in recent years.

In 2015, New York-based tech companies raised nearly $7B in funding compared to Massachusetts-based tech companies which raised $4.3B. A significant part of the $7B going to New York is attributable to the mega-rounds raised by FanDuel ($275M), Karhoo ($250M), Vice Media ($200M), and Buzzfeed ($200M). 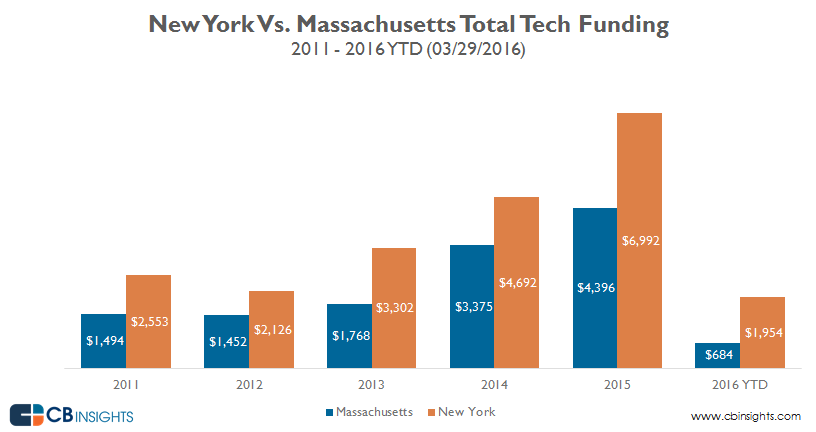 In 2015, New York-based tech companies had more than double the amount of deals completed compared to Massachusetts-based companies.

Despite having less deal volume, Massachusetts’ deal activity has grown at a quicker rate. In 2015, New York deal count grew just 3% over the previous year compared to Massachusetts which grew 15%. 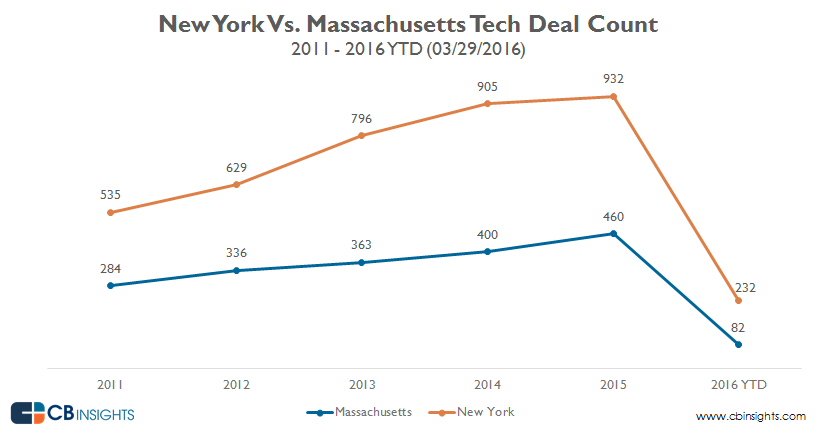 Most well-funded company by state

To date, New York-based Vice Media is the most well-funded startup between the two states raising $770M in funding. Fantasy sports startups DraftKings and FanDuel rank in the top 5 for each state, both raking in large amounts of funding to date.

*Note: The data above and the list below exclude debt funding.