Research Brief
1421
While NY beats its northern neighbor Massachusetts in VC financing and deals, Mass holds a solid edge when it comes to VC-backed exits.

Of course, Primack’s post elicited responses. Via Twitter, Shai Goldman of Silicon Valley Bank made a fair comment pointing out that NY’s tech scene is still relatively nascent so it’s hard to judge it yet especially versus Massachusetts with its longer history. He commented:

So naturally, we wanted to to dig into the financing and exit data for the east coast tech ecosystems to compare them side-by-side. Now, those on both sides of the argument have data to help make their case.  We dig into the following VC stats for each market:

[Tweet “Based on the size of VC-backed exits, NY doesn’t compare to Massachusetts”]

The money isn’t drying up in New York. In fact, it’s established a firm lead over Massachusetts after jumping out ahead for the first time in 2010. So far, in 2014, NY has increased its overall funding in the state by 29% versus all of 2013. Both Massachusetts and NY are up vs 2013 already through just the first 9 months of 2014. NY’s 2014 VC tally has clocked in at $3.5B.  2013 saw NY VC-backed companies raise 197% more than their Massachusetts counterparts. 2014 has seen the gap persist but shrink a bit with 143% more funding to NY companies versus Massachusetts. 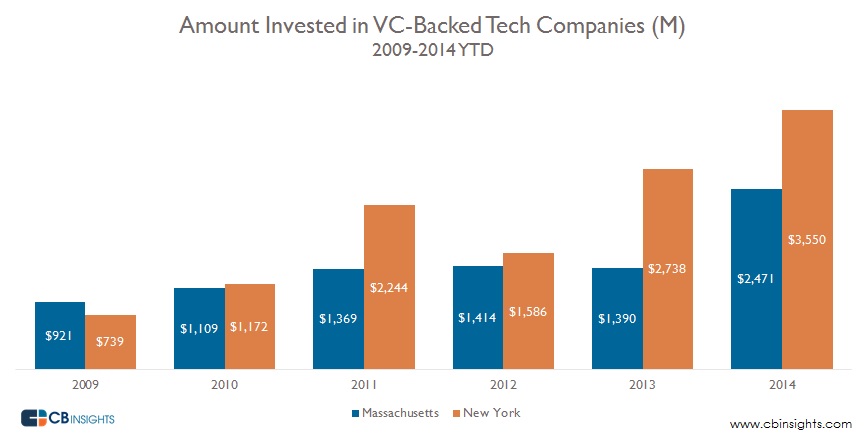 Number of deals – NY wins (but Massachusetts is growing faster)

If we assume that the pace of deals through the first 9 months continues through the end of the year, NY’s deal run rate for the year is 451 deals while Massachusetts would hit 272. So NY retains its lead on absolute deal counts, but if the run-rate holds, Massachusetts will have grown 16.7% YoY vs NY at 8.3%.

Of course, NY is growing off a much larger base so the disparity in growth rates might be expected.

Most well funded companies – NY wins but with a big asterisk

Vice recently locked down $250M from Technology Crossover Ventures and a stake of the same amount from A&E Networks to secure its top spot as the most well funded company in New York. This is more than double the funding of Actifio, the most well-funded company in Massachusetts. Even Gilt, which rounds out the New York list, has raised more money than Actifio.

But, it is worth noting a few things about this list: 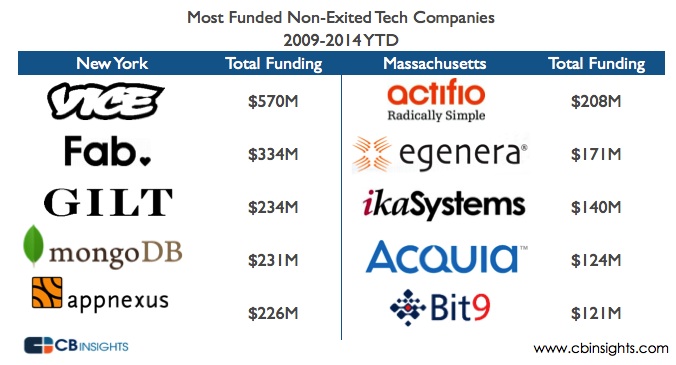 Number of Exits – Tie but Massachusetts is winning in 2014

The two states seem to be in a constant flux when it comes to who has more exits.  In 2012 and 2013, New York took the top spot by a considerable margin. However, Massachusetts has retaken the lead by a slight margin in 2014 with 47 exits this year. 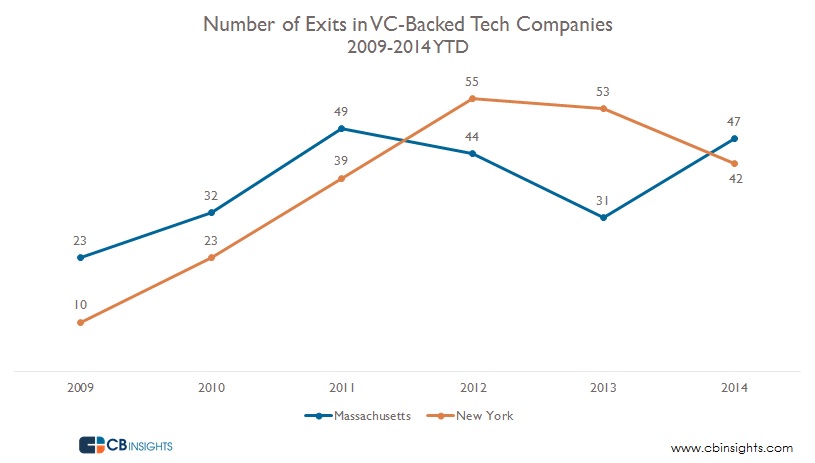 We examined the five largest exits in the past two years for each market to understand the size of more recent VC-backed exits. Wayfair, with its $3B+ valuation, is bigger than all of NY’s top 5 exits combined. Tumblr’s acquisition was a big exit for the New York tech scene as it was the first NY exit above a billion dollars, but the next largest acquisition is less than half of the size.

On the other hand, Massachusetts has 4 companies with $500M+ exit valuations.

Of course, post-IPO performance varies significantly among these players. Tremor Video has plummeted and is worth a fraction of it’s IPO day valuation and might be trending towards delisting unless it can right the ship.

What do you think?  Is NY overhyped given its lack of massive exits or is this just a function of NY’s relative immaturity as a tech ecosystem? Leave a comment and let us know what you think.