Research Brief
3514
Boston meanwhile, where healthcare is strong, sees the most IPOs.

Outside of Silicon Valley, New York has seen the most venture-backed companies exit since 2012, over Boston and Los Angeles.

In fact, nearly half, 44%, of all the exits in the three cities over the last five years were for companies in the New York area. Boston and environs took 30% of the total, and Los Angeles came in a close third with 26%.

But LA saw a greater proportion of the biggest winners among the three metro areas. Of the top 12 exits, all $1B or larger, six were from the LA area, five were from New York, and just one was from the Boston metro area.

Legendary Entertainment, based in Burbank, California, about 10 miles north of LA proper, had the most valuable exit of any company in the three metropolises since 2012. The company was acquired by Chinese conglomerate Wanda Group in January 2016, at a valuation of $3.5B.

Using CB Insights data we looked at all of the exits that occurred in the three areas over the last five years. Our analysis considers companies that are based (at the time of exit) in locations within the greater metro areas of Boston, Los Angeles, and New York.

Our analysis focuses on the following areas:

The New York metro area has seen over 40 venture-backed companies exit annually since 2012. Last year, the Big Apple and surroundings saw 56 exits, the highest year on record. Boston overtook New York in 2014, with 51 exits but lost the lead thereafter. So far this year, LA has been beating out Boston with 27 exits through 10/11/2016. 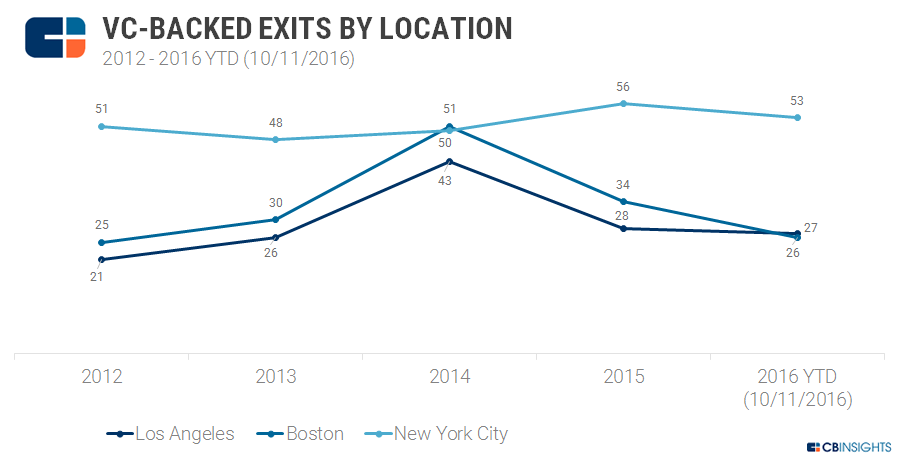 Boston has seen at least four companies go public annually since 2012, and has the most IPOs overall. In 2014, Beantown and its surroundings saw 13 IPOs, the same year it briefly overtook New York for the most exits overall. IPO activity in Boston has since trended downwards with nine in 2015, and seven so far this year through 10/11/2016. In 2014, Los Angeles nearly tied with New York, at 5 IPOs, and has seen 3 IPOs so far this year.

New York has seen the most M&A activity over the time period with over 40 companies acquired annually since 2012, and over 50 since 2015. Also, LA and Boston tied for M&A activity in three out of the five years examined. So far this year, LA has seen the second-most M&As, with 25. 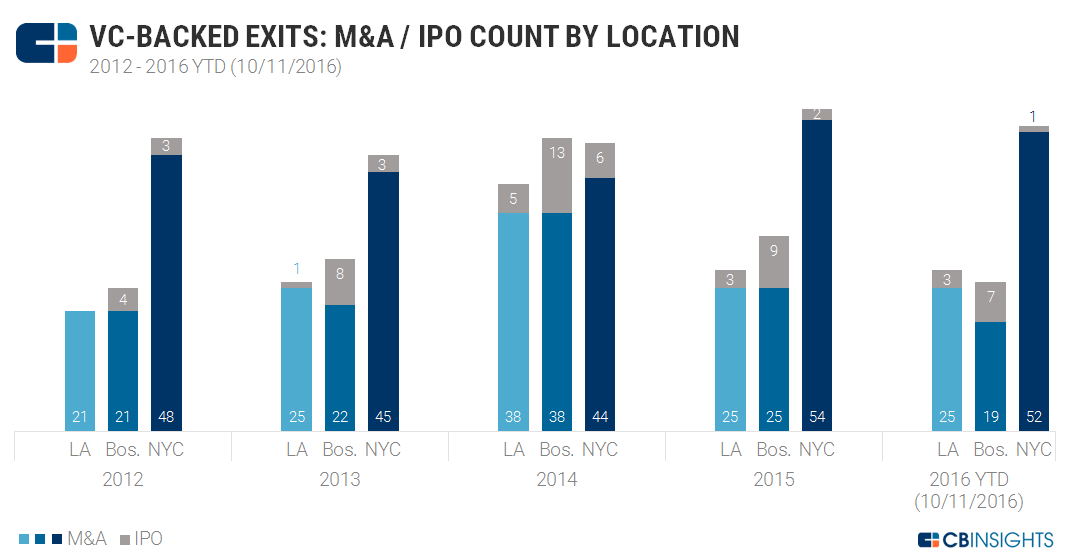 Since 2012, New York has seen more internet-focused companies exit over any other sector. Fewer companies that exited were in the mobile and telecommunications sector, and not many healthcare companies exited in New York. 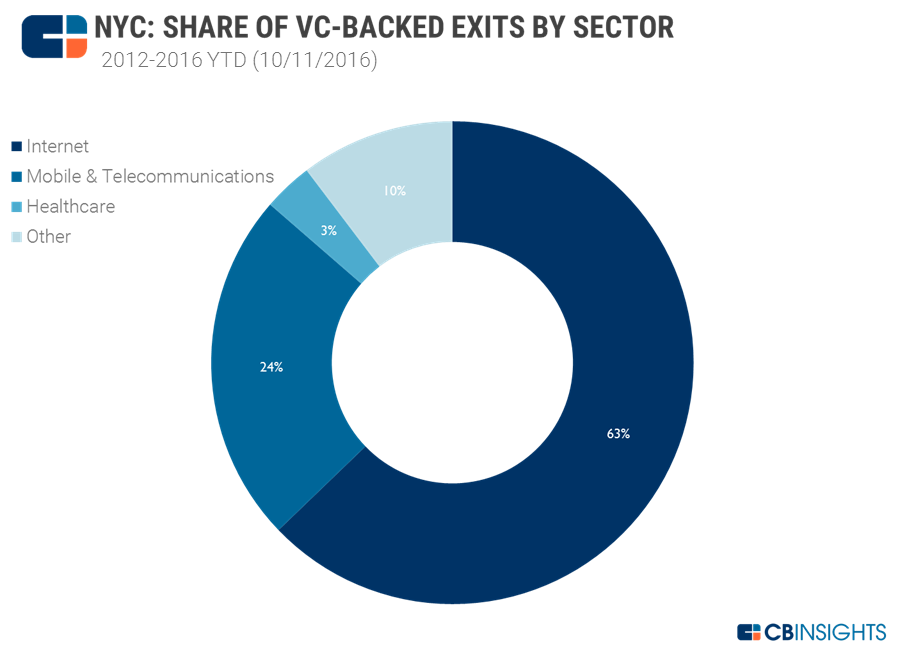 Since 2012, Boston has seen a nearly equal share of internet and healthcare companies exit. Other sectors trailed far behind. 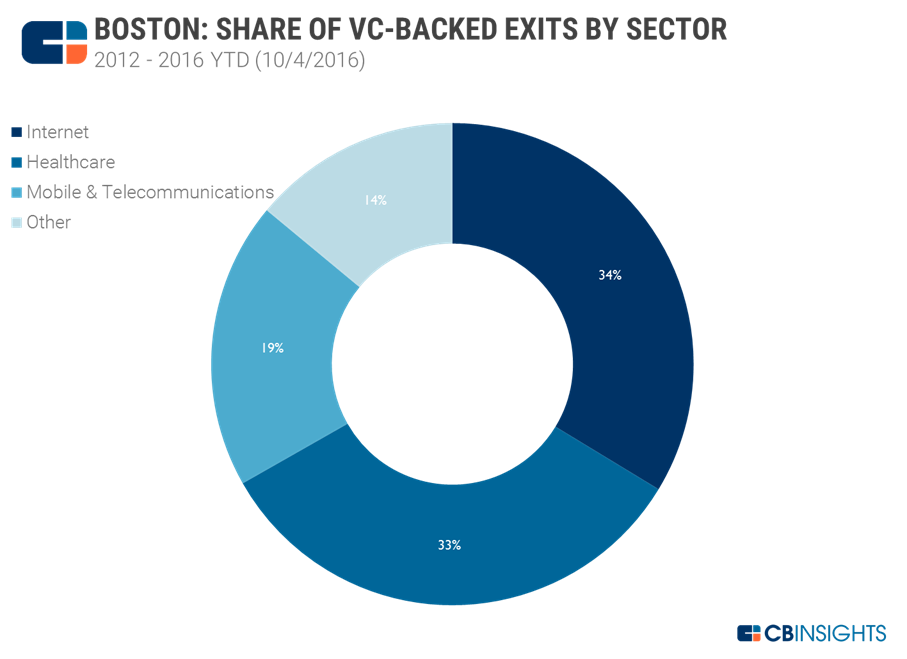 Since 2012, Los Angeles has seen over half of its exits come from companies in the internet sector. Around 10% of companies exited in mobile and healthcare. No other sector accounted for more than 7% of LA’s exits over the time period. 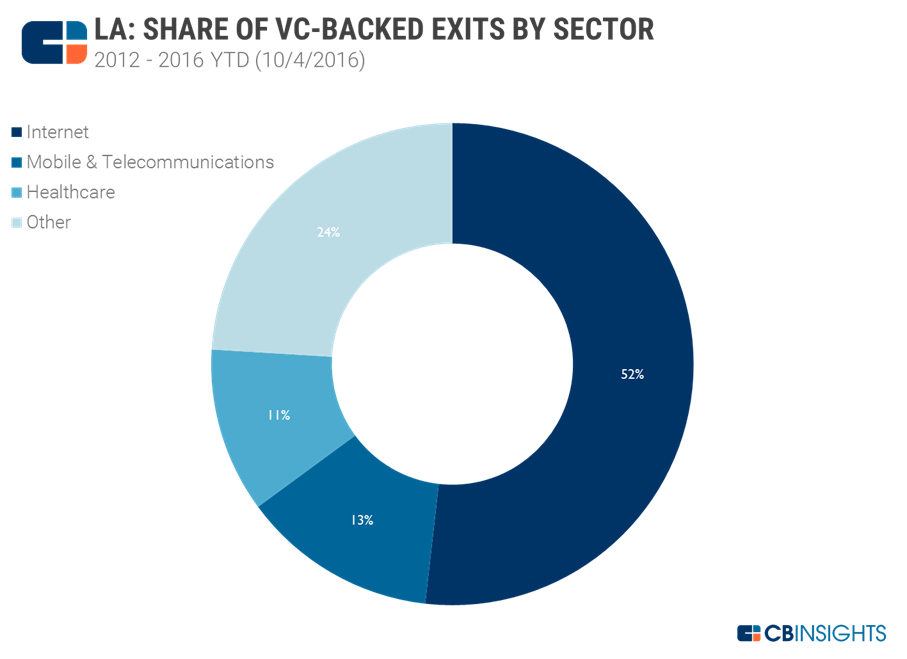 Boston saw nearly half of the $100M+ mega-exits over the time period, New York came in second, and the LA area trailed closely behind in third. Boston’s most valuable exit was for the company Wayfair, which went public in October 2014, at a valuation of $2.4B.

Jet.com’s acquisition by Walmart in August 2016 (mentioned above) is the New York metro area’s most valuable exit. Other notable exits for the NYC metro area include: Stamford, Connecticut-based Indeed, acquired by Recruit Holdings in September 2012, at a valuation of $1.4B; OnDeck Capital, which had its IPO in December 2014, at a valuation of $1.3B; and Tumblr, which was acquired by Yahoo in June 2013, when the company was valued at $1.1B.

Legendary Entertainment’s IPO in September, 2016 (mentioned above) is LA’s most valuable exit. Other notable exits for LA include Oculus VR, which was acquired at a valuation of $2B by Facebook in March 2014, and NantHealth, which went public in June 2016, at a valuation of $1.7B. 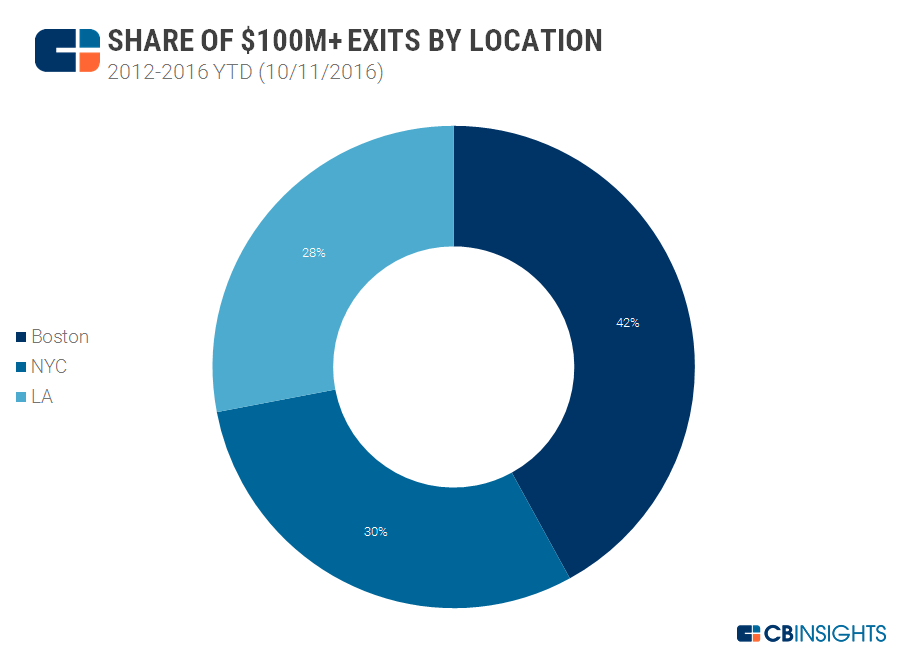 The top 20 most valuable exits

Of the 20 most valuable exits, the Los Angeles and New York metro areas tied with seven each, Boston was close behind with six.

Of the top exits that were for $1B+ LA had six, the  New York area had five, and Boston had just one.

*Only first exits of companies are included in this analysis.

Want more data on innovation hubs? Log in to CB Insights or sign up for free below.